There is no theme more persistent and all-pervading in the tech world than that of the “challenger vs. incumbent” — a story we cherish because it strikes at the heart of central western motifs like the hero’s journey, the tale of the underdog, and David vs. Goliath. It doesn’t matter at what scale the story is staged as long as the underlying plot is framed right, and then we’re sold.

Lyft vs. Uber, Alibaba vs. Amazon, Hadean vs. Improbable, or Unreal Engine vs. Unity, the battle of the binaries is always compelling, and the convergence of emerging technologies like blockchain, artificial intelligence, and mixed reality only make things that much more interesting as each incumbent stands always just a few disruptive events away from having the ground beneath them crumble.

Too much of a good thing

For mainstream industries, this archetypal theme plays out as a central narrative, but it also as easily becomes a crutch with overuse. Especially in the setting of an emerging tech like mixed reality, where the market dynamics are still so fluid, we have to be wary in how it can dampen and narrow our understanding of an unfolding ecosystem when we attempt to oversimplify the scenario simply to feel like we understand what’s going on.

As I wrote back in June, I believe that thinking in binaries in the context of the mixed reality market invariably forces us to see things through the skewed lens of false narratives, which inevitably corrupts our understanding of the state of VR and AR and creates a systemic approach to poor decision-making.

“Today’s market is a collection of related point solutions to specific problems, but not a fully functioning ecosystem. Not yet. For the market to begin to challenge incumbent platforms (particularly mobile), great tech alone is not enough. AR/VR/XR needs its own Reality Ecosystem. And there are a lot of pieces to the puzzle.” Tim Merel, the founder and managing director of tech adviser Digi-Capital, wrote in his recent piece on the state of the VR and AR ecosystem.

In this case, Merel pits mixed reality against all of the incumbent platforms, and “particularly mobile,” conveying an either-or narrative in which VR and AR can only succeed by competing for market share. The narrative betrays a way of viewing the landscape that is based on a mentality of scarcity and altogether ignores cooperative models through which the emerging tech can be seen as in fact serving as an additional layer of value.

One hell of a blind spot

The underlying problem is the apparent incapacity or unwillingness on the part of pundits, the media, and the big industry players to look upon the landscape with a more nuanced and subtle lens that considers the possibility that not only are all the puzzle pieces already on the board, but that the core issue is that of failing to recognize the central importance of one piece above all.

That piece, in my opinion, is WebVR, the JavaScript API that allows you to load VR with your browser. The “immersive web”, as it is otherwise commonly known, allows for cross-modality or cross-reality experiences to be created and playable on all platforms and across all devices, VR and soon also AR devices, which you can already see slightly in action with Magic Leap’s Helio WebAR browser.

That unique feature entails a Pandora’s Box of positive implications, but the most important one is that it allows mainstream users to access VR and AR content through all incumbent platforms..

Take the example of Learnbrite, a commercially viable WebVR platform that allows educators to enhance learning through avatars, non-linear dialogue, and gamification through virtual environments, which I covered back in May. The overwhelming majority, and I mean over 90 percent, of Learnbrite’s enterprise users access their VR learning platform without a headset, which means the primary device used to access the 3D worlds is a laptop or mobile device.

There’s no fork in the road

One longstanding perception that had its inception at the start of this latest wave of the VR hype cycle is that the emerging tech would be dominated by gaming as its primary application. This allowed for Unity, the game engine that is inherently designed for the psychographic model of heavy gamer, to rake up over two-thirds of the market. It also had the collateral damage of framing the immersive web as a rival platform to the game engines, which has encouraged developers and companies in the space to continually overlook how WebVR can help and support Unity content exactly where the incumbent immersive platform is most weak.

The most significant and critical role that WebVR can play for Unity developers is as a marketing channel and promotional platform that can drive literally billions of mainstream users their way. For example, a limited WebVR “trailer” version of a Unity experience can be released that is playable on any device and doesn’t innately require the need for a headset.

This would make for a considerable upgrade compared to the 2D images and videos that companies are otherwise trying to use for their marketing outreach because it offers mainstream users, at the very least, an immediate taste of what’s available down the rabbit hole. WebVR as a media asset can serve as a key marketing channel and trigger that convinces and motivates average people to tread through all of the friction necessary to access the full experience.

Calling in the cavalry

After 2016, it became increasingly apparent that gaming was not in fact the dominant application for the new medium and the market gradually realized how sticky enterprise applications are. That should have been the cue to take a second look at WebVR for many companies because it would be calling up and activating the dormant talent pool of web developers that can readily enter the mixed reality industry and bring with them way more expertise in rolling-out enterprise products and platforms than game developers do.

“Yes, Unity and other game engines are very productive tools. But they’re also mostly for game developers,” Tony Parisi, Unity’s Global Head of VR/AR Brand Solutions, told me back in September 2016 when I published my first piece on the critical role of WebVR.

As Stephanie Llamas, VP of Strategy and Head of XR at SuperData Research, presented in AWE USA last May, there is currently in fact a shortage in supply of VR and AR startups catering to demand in non-entertainment sectors like education and healthcare. 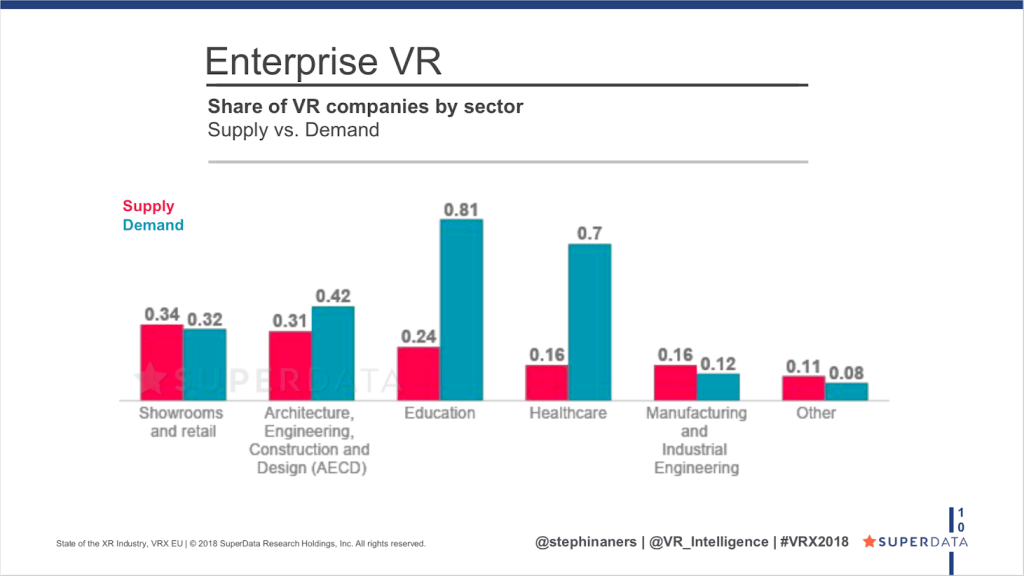 The current market gaps can be addressed much faster by leveraging WebXR because it is easier and quicker to convert web developers into WebVR developers than it is to train Unity developers thanks to open-source libraries like Mozilla’s A-frame and plug and play authoring tools like Amazon Sumerian. The building and shipping cycle is also much quicker.

As Parisi said, “the process of packaging and deploying for app stores, and maintaining apps, is burdensome versus web publishing,” and so product teams can expect to iterate faster with WebVR and in many cases the switch of platforms will in and of itself influence a shift in the ideation process, and the spread of content and products that are developed therein. For instance, in this year’s edition of the Global WebXR Hackathon, over 80 percent of the 21 submissions we received worldwide were themed to the education category, and not games.

What this all tallies to is that the mixed reality industry is vulnerable and hugely influenced by these perceptual, false, binaries that ultimately undermines all of us from reacting rationally to market realities. As we approach the inflection point of the industry, which may be as soon as next year, it will be increasingly ‘incumbent” on all the players in the space to adopt a bigger, broader, and more inclusive lens, with the immersive web positioned front and center.