Advanced Micro Devices is rolling out its latest processors based on the Zen architecture that will attack the low end of rival Intel’s product line. The new chips include an Athlon-branded chip that is an accelerated processing unit (APU) combining graphics and processing on one chip.

The AMD Athlon 200GE with Radeon Vega 3 graphics has two CPU cores and will sell for $55. It is targeted at everyday PC users.

The chip combines a Zen-based core with Vega graphics. AMD’s Zen architecture is a ground-up design that AMD started launching in its chips in 2017. It can process 52 percent more instructions per clock cycle than previous chips and has made AMD more competitive with Intel than ever.

On top of that, AMD is launching an AMD Athlon Pro 200GE chip with two CPU cores and three graphics compute units. That chip is targeted at the commercial market.

AMD is also launching three new models of Ryzen chips, again for the commercial market. The chips include the six-core AMD Ryzen 5 Pro 2600, and two chips with eight cores, the AMD Ryzen 7 Pro 2700 and the AMD Ryzen Pro 2700X. 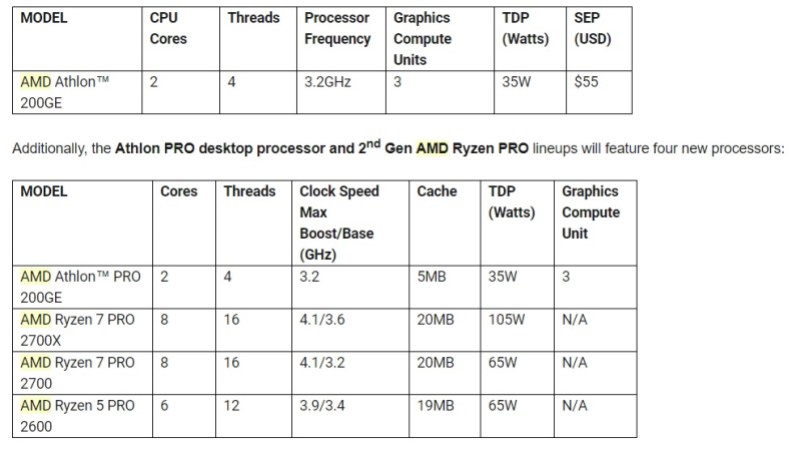 All the chips are targeted at enabling everyday computing, from web browsing and processing to more advanced workloads like high-definition PC gaming. The AMD Athlon 200GE offers up to 67 percent more graphics performance and up to 2 times greater power efficiency, delivering 84 percent faster high-definition PC gaming than the competition, AMD said.

Robert Hallock, AMD senior technical marketing manager, said in a video briefing that the company was keeping the Athlon brand name in the Ryzen era because it has a rich history with a variety of consumer and commercial customers.

“The reason why we chose to go with the Athlon brand is because it’s trusted,” Hallock said. “It is for versatility, reliability, and performance.”

Hallock said Zen has put AMD “back in the fight” across a variety of markets.