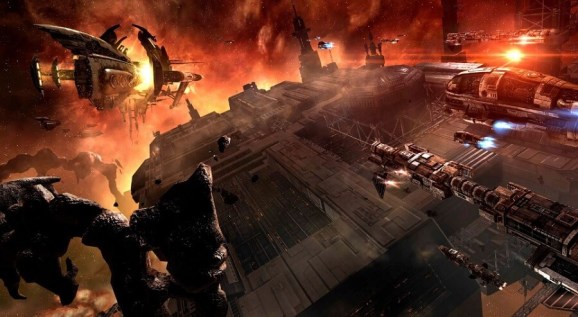 Hilmar Veigar Pétursson has worked at Eve Online maker CCP Games, Iceland’s biggest game studio, for 18 years, and he has been CEO since 2004. Today, he announced he agreed to sell CCP to Black Desert Online creator Pearl Abyss of South Korea for $425 million.

That’s a very nice pay day for CCP, but in an interview with GamesBeat, Pétursson said CCP and the staff of its successful Eve Online massively multiplayer online role-playing game will see no major changes. The company wants to reassure the hundreds of thousands of fans of Eve Online that they will not face any major overhauls or changes to the sci-fi game they love.

Pétursson acknowledged that the company didn’t succeed with VR games, and last year it began working on a new strategy. As it did so, it sought new sources of investment, and that opened the door for the acquisition.

Pearl Abyss is in a good position with 9.5 million registered players for Black Desert Online, and it hopes to expand that with new titles in the coming years. CCP is also working on an unannounced game, and it employs more than 250 people in Reykjavik, London, and Shanghai. 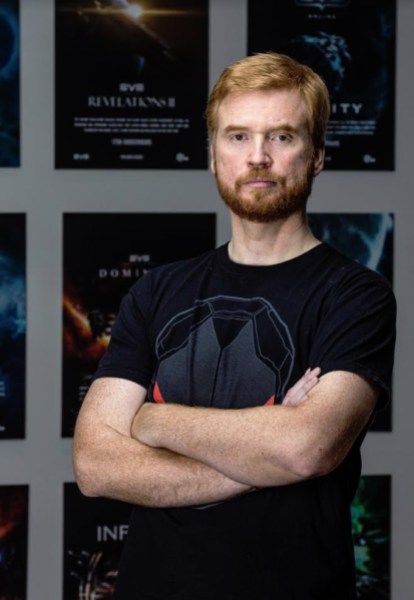 Above: Hilmar Veigar Petursson has been CEO of CCP Games since 2004.

GamesBeat: It sounds like you’re pretty busy over there.

GamesBeat: What motivated you in doing the deal?

Petursson: We made a pretty big change in terms of strategy last year, where we decided to stop doing further VR development for now, considering our assessment of the installed base and how it was going to track going forward. We restructured the company around that. We decided to focus more on core PC games and core mobile games.

Subsequent to that, we decided to take our new strategy on the road, for lack of a better word. We engaged a Korean group in collaboration with our developers as strategic ambassadors, to talk to people about joining the mission of the new strategy. Out of that process we found a lot of resonance and interest in the changes we were making and what we were planning up ahead.

As we went through that process, we got to know the team over at Pearl Abyss, what they’ve been up to and what they’re planning in the future. We saw a lot of synergies between our plans and their plans, our mutual backgrounds and culture and DNA. It might not be an obvious synergy, an Iceland company and our Korean company, but we found we have a lot in common. As we worked together, we came to the conclusion that this would be a good moment to make the change for CCP, to stop being a company owned by our current investors, and instead join Pearl Abyss and become a part of that.

GamesBeat: How did some of the thinking change? Did you need money for particular projects that you wanted to do? Was that some of the impetus for going outside?

Petursson: We’re covering our development budgets. We have very good cash reserves. We have about $40 million in the bank. But as they say, the best time to raise money is when you don’t need it. That was kind of the impetus behind doing this. Also just to get feedback from the various people who we talked to throughout the process. We wanted to learn what really resonates with the market today. It was those two things combined. 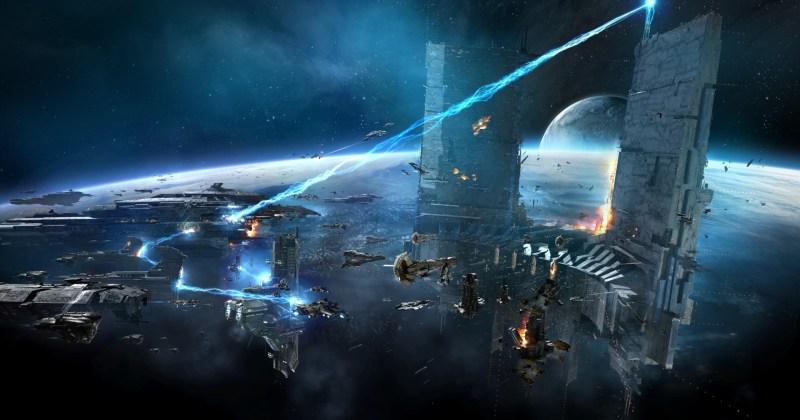 GamesBeat: It sounds like VR was costly in some ways for you. What was your assessment of that experience? It didn’t really endanger the company, it seems like. It was a disappointment, but not that bad.

Petursson: No, it was a kind of calculated risk. In this business you have to take some risks. Overall, it did very well compared to the market size. When all the chips are counted we made about $3 million out of the four games we did, through a combination of direct consumer revenue and co-development with the platform holders. I wouldn’t call that a very bad outcome. But the market is going to need a few years to justify more bets along the lines of game investments at the scale we like to do.

We’ve decided not to do new development, but we’re going to keep our current games in operation. We’ve done well subsequently. We’re still selling quite well given the market size. We just want to focus more on PC and mobile. Since then we’ve announced two more mobile titles: War of Ascension and Project Galaxy. We also have discussed development of a first-person shooter in the Eve universe, Project Nova, and we’re working on a new action MMO in London.

GamesBeat: You’re doubling down on a lot of things, as opposed to branching out, it seems. Mobile is a kind of branch for you, maybe? How would you characterize that?

Petursson: Certainly we’ve kept an eye on mobile for the past 10 years. I’d say now the market for mobile is turning more toward deeper, more hardcore games. It makes sense for us to take a closer look at that now. That’s why we’ve started mobile game development. Eve: War of Ascension is already in a soft launch process. The KPIs for that game are looking extraordinarily strong. We feel confident in the decision that this is the time for us to take a closer look at mobile.

GamesBeat: When you look at the global games business, it doesn’t surprise me that an Asian company is doing a deal like this. Does it feel like that’s part of the future? Financially strong companies are quite often in Asia now.

Petursson: It’s a combination of a lot of things. At CCP we’ve always looked toward Korea and China — initially more toward Korea — when it comes to the concept of running games as services and online games in general. That part of the industry was basically born in Korea, and reached enormous scale in Korea. When it comes to trends, the outlook in Korea today might be a reality worldwide five years later.

For example, when we were looking at taking Eve free-to-play, that model was already very well-established in Korea. It was a number of years before it fully took root in the west. If you look at the mobile games that are played in Korea, they’re much deeper, much more like triple-A PC or console games that we know in the west. If you look at something like Black Desert Online on mobile, the game looks amazing. You wouldn’t believe it was a mobile title. So we’ve always looked to Korea, and more recently China, when it comes to guesstimating what’s going to be a reality elsewhere five years from now. That’s one aspect.

Another aspect is that the Asian markets — particularly in China, Korea, and Japan – value gaming companies quite highly. If you look at the multiples in those markets compared to markets in the west, there’s a deeper, more ingrained gaming culture, and a deeper understanding of the role of games in the future. And of course we have a lot of global powerhouses stepping into the arena from Korea, China, and Japan, more so than ever. The companies in that area are leading. It’s really not a surprise to hear that we’re partnering with a Korean company. 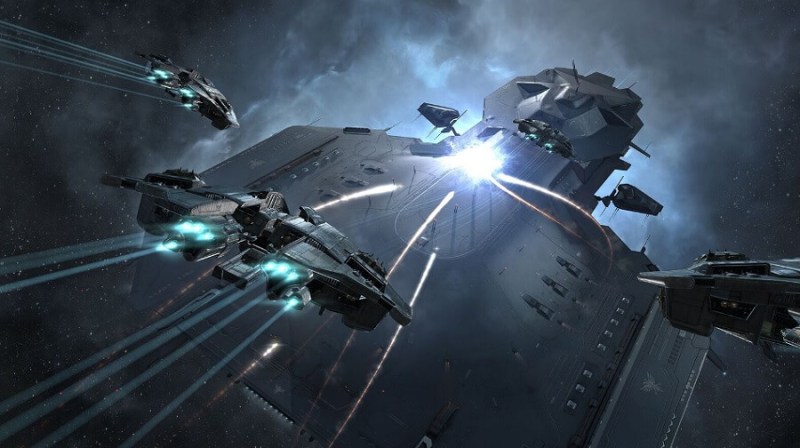 GamesBeat: Where are you as far as number of employees now? Are you planning to grow, or to do more development in Asia in the future?

Petursson: We have 250, 260 employees. We’re not necessarily looking to expand a lot as a consequence of this move. We have some open positions on our website and we’re hiring into existing projects, particularly in our London studio, but there are no big expansion plans as a part of this. Of course, as we move through the coming months and years and we build our partnership with Pearl Abyss, who knows where we’ll take it? There just aren’t any immediate plans to make any changes on that front.

GamesBeat: You also have a studio in Shanghai as well?

GamesBeat: Was there anything particularly complicated about this deal? It seems to have taken a while.,

Petursson: There are definitely aspects that are complicated. It’s why we’re having this call pretty late. [laughs] It’s a very large international, cross-border transaction involving two very big companies. An army of lawyers has been working on it. It’s just the process of getting something like this done. I don’t think it’s anything very unusual, given the number of jurisdictions and the size of the whole thing. It’s certainly been a good amount of work involving a very big team of advisers to get us to this point.

GamesBeat: I didn’t see a purchase price in the press release yet. Do you have one you can announce?

Petursson: Yes, the purchase price is $425 million. That’s a combination of an up-front payment and an earnout arrangement.

GamesBeat: When was the last time you guys raised money? Or did you ever seek outside funding like that?

Petursson: The last time we raised money in 2015, with NEA. It was part of our push into VR.

GamesBeat: And Pearl Abyss is buying everything, right? 100 percent of the company?

GamesBeat: Well, congratulations. It sounds like a good home for you guys.

Petursson: We’re very excited. Like I said at the beginning, we found a lot of synergies between the two companies. If you make hardcore MMOs your company is very much shaped by that.

Above: Eve: Valkyrie Warzone and other VR titles brought in $30 million for CCP.

GamesBeat: Where are you as far as number of users on Eve Online?

Petursson: Eve has held its position since the move to free-to-play. It was a very successful move for us. Right now our main focus is on the re-release in China. Of course, we have big updates planned up ahead. We still see a lot of opportunity in Eve. It’s been an amazing 15 years. We’re laying down plans now for a third decade of Eve Online, which sounds like absolute madness when you say it, but it makes all the sense in the world based on how the numbers have been trending.

Petursson: Yeah, this summer has been an absolute record in terms of warfare in Eve Online. We had the biggest battle in the history of Eve in January, but throughout the summer we’ve had numerous big engagements. People have been bringing out their super-capitals in numbers we haven’t seen in years. It’s been a very exciting summer for us. We’re making sure all the servers are up and running, getting them to cope with what’s going on. We’re reinforcing that plan.

GamesBeat: Is the game still well into the hundreds of thousands of players?

GamesBeat: There’s a lot of activity for a user base of that size.

Petursson: Yeah, the activity among Eve players is impressive across the board, no matter where you look.

GamesBeat: Is there anything else in particular that you’d like your community to know about the deal?

Petursson: We look at this as the next natural step for us as a company. We’ve had some of our investors on board for the past 13 years. There’s a lot of opportunity in joining up with another MMO developer. Together, I think we’ll have a much deeper bench of experience and resources to pull from, to even further strengthen Eve Online. I hope our 21 of operations will benefit Pearl Abyss as well. They’re on a journey we’re very familiar with. I hope that some of our experience will help them as they move through their stages of growth.