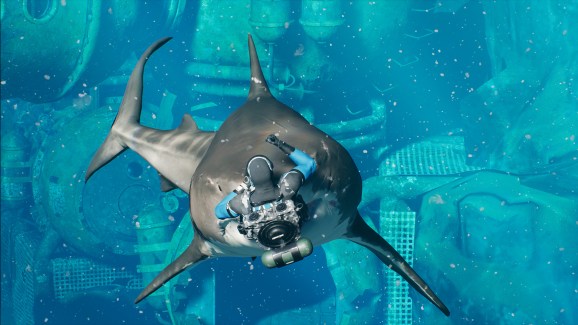 New Zealand-based Digital Confectioners is in the process of following up its shark versus human multiplayer action game, Depth, with another multiplayer outing featuring yet more sharks. You might be forgiven, then, for assuming that this was all part of a plan, and one that prominently featured menacing aquatic predators from the outset. You’d be wrong, though.

Before Depth, the studio was mostly focused on programming, and after shelving its first project it had started to do contract work on Dark Vale Games’ MMO, Forge. The contract work continued after Forge launched on Steam, but it was a means to an end. That end being the development of their own games, free from publishers and investors.

“We wanted to stay 100 percent independent,” says Neil Reynolds, game director at Digital Confectioners. “We used contracting to fund our internal projects, as opposed to looking for investment. We’ve never used investors at all. That was always the goal. We didn’t want to be bound in any way. We’ve never used a publisher. We finished our last contract halfway through 2016 and haven’t picked up another one since.”

A meeting at GDC with designer Alex Quick would set Digital Confectioners on the path to switching from contract work to developing their own projects. Quick had been working on Depth, but was unable to continue development without support. Work had already been done, particularly on the art side, but it needed programmers—Digital Confectioners’ specialty. Rather than working as a contractor, however, the studio developed Depth in partnership with Quick, eventually buying his share when he moved onto other projects.

Every week is shark week

“Essentially, when we started the partnership, we started the game from scratch again,” Reynolds says. “The only things we kept were the art assets. They were very useful, because like I said, we were always a programming studio as opposed to an art studio. We’re becoming more of a mixture now. We’re hiring artists. But the design from original Depth was almost entirely thrown out.”

Maintaining a multiplayer game for almost four years is no mean feat, especially now, when even large, critically successful games like Lawbreakers have quickly fallen by the wayside. Reynolds’ doesn’t attribute Depth’s longevity to a single source, but unsurprisingly the community is a priority. 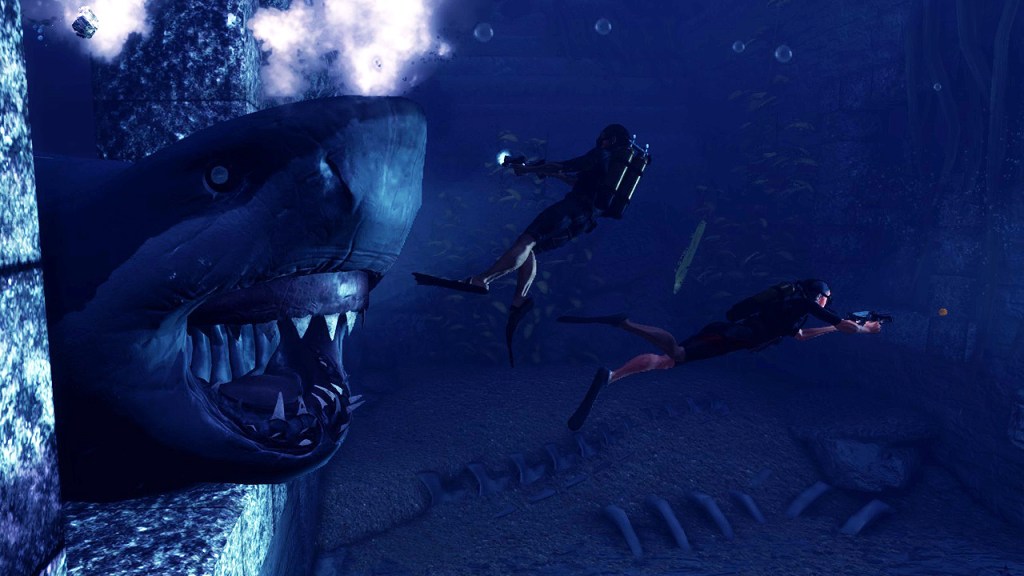 “Running events, being involved in the community, doing updates—one thing we’ve done that’s been really successful is Steam Workshop. Our users make skins for sharks and weapons, and we add them to the game. We sell them in bundles and include the community. We give a 50-50 split with the community for all revenue from that, after Valve’s cut and anyone else’s cut. It’s 50-50 with us. That’s been really good for us as well. The money that we get from that is not very significant when compared to game sales, but it’s better for driving actual sales and having a larger player base.”

Despite spending nothing on marketing initially, word of mouth worked its fickle magic and Depth got the players it needed to carry on. Seasonal sales, free weekends, and updates brought in new players and seduced old ones back, and by its third anniversary the game had hit a million sales.

Reynolds measures Depth’s success by more than concurrent player numbers. “If you look at our raw concurrent player numbers, they may not look impressive compared to big triple-A games. But something those numbers don’t reflect is that, although we may not have the highest concurrent players, we get a lot of unique players every month. So a lot of people play Depth, but they just play it for short amounts of time because Depth is a very high adrenaline game. It’s not the sort of game most people will sit down and play for eight hours, like an MMO or DOTA or League of Legends.”

In 2015, Digital Confectioners started pre-production on a second game, a battle royale prototype that would become Last Tide. This was before PlayerUnknown’s Battlegrounds popularized the genre, but Brendan Greene’s ArmA mods and H1Z1’s battle royale mode were already kicking about. There was inspiration, but not a lot of competition. That would rapidly change.

“We thought this was really cool and we should have a go at making one,” Reynolds recollects. “And back then it wasn’t going to be underwater at all. It was just going to be what would now be considered generic: a modern military shooter. But other studios were working on them and more started coming out. We thought we should make sure to differentiate ourselves and stay with something we know, which is sharks. It’s really unfortunate that we didn’t have the manpower to really kick it into high gear back at the end of 2015.”

With Depth, the studio had been able to rely on pre-existing art, but with Last Tide they had to start completely from scratch. While the studio had grown, it found itself in a case of role reversal, looking for a contract developer. During development of Forge, Digital Confectioners wasn’t the only contract developer. A dedicated art studio, Super Genius, had also been brought in. The pair decided to work together again, and with Super Genius working on the art, development of Last Tide was able to begin. 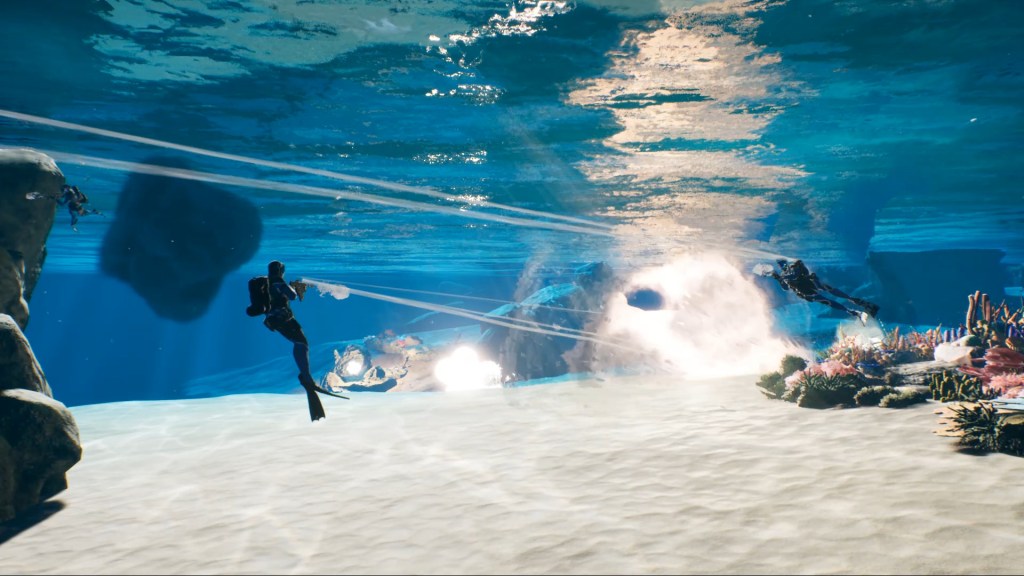 The switch from land-based fights to underwater brawls means that players have a whole other axis to worry about. “It’s very different,” Reynolds says. “One of the things we’re struggling with is trying to portray the differences to people. Until you play it, until you realize how different the extra Z axis makes it—everything you know about tactics and how to sneak up on people or how to clear an area as a squad is completely different when it’s underwater.”

Depth players will have a bit of an advantage. The weapons feel similar, and the sharks, while not controlled by players this time, have similar audio cues. Experienced players know what to listen out for, and how to use the 3D audio to determine where sharks are coming from.

While not completely ruling out letting players swim around as sharks, right now Digital Confectioners is keeping them as a persistent obstacle rather than the main threat, a role played by the 99 other divers. The sharks instead serve as a replacement from the shrinking circle that forces players into violent confrontations. Since it’s made up of sharks, it shouldn’t be surprising that it also functions quite differently from the versions found in Battlegrounds and Fortnite.

“Our shrinking mechanic doesn’t force you to go to the center,” Reynolds explains. “It doesn’t directly damage you if you stay outside the zone. It just sends sharks after you. And if you can fight the sharks, then by all means. If you’d rather stay out of the circle and try to fight the sharks, rather than other players, you can try that if you want. In these other games, it’s just a damage tick over time. You can try to outheal it, but it’ll get you eventually.”

With so many battle royales drawing direct comparisons with behemoths like Fortnite and Battlegrounds, it is perhaps fortunate that Digital Confectioners got the ball rolling later than Reynolds wishes it had. An aquatic battleground full of sharks strikes more of a chord than yet another countryside warzone populated by soldiers. And it would be a shame if the world was robbed of Last Tide’s gruesome chumnades. As the name suggests, they’re grenades that explode into a cloud of chum, attracting sharks looking for a quick snack.

It was serendipity that brought sharks and Digital Confectioners together, twice. And twice it seems to have worked out. Since its early access launch in late August, Last Tide has garnered a ‘Very Positive’ rating on Steam, and the studio continues to expand Depth. Players are helping to pick the next playable species, and an update was released to coincide with Last Tide, introducing eight new sharks.

With both games running concurrently, it’s going to be a while before it’s safe to go back into the water.