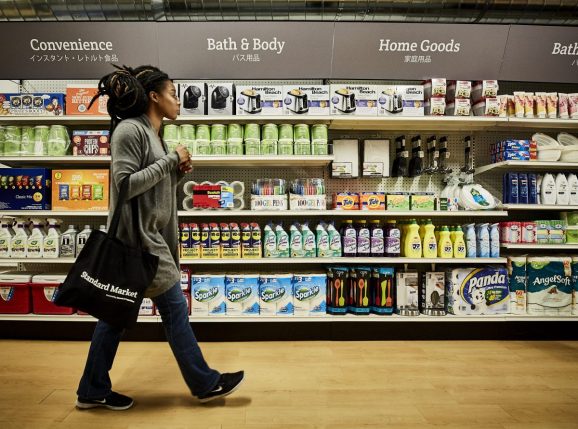 Startup Standard Cognition today announced plans to open a cashierless store in San Francisco in the coming days. Named Standard Market, the store will operate with limited hours and is a testing site for Standard Cognition’s artificial intelligence that uses cameras to track the movement of shoppers throughout a store.

When you arrive at Standard Market, located at 1071 Market Street, you use the Standard Checkout app to check in, then just walk out with whatever you want. Initial products for sale in the 1,900-square foot store will include a mix of food, cleaning supplies, and general household or convenience store items.

This is Standard Cognition’s first public store. The startup, which has been working on its cashierless store tech since 2016, previously operated a private store in Palo Alto, California.

The news comes the same week that Amazon opened its third cashierless store in Seattle. Amazon did not respond to VentureBeat requests to comment about its future San Francisco or Chicago locations.

San Francisco appears to shaping up as a battleground in the competitive race to roll out effective cashierless store solutions.

In addition to an Amazon Go store planned for an unknown later date, less than a month ago, the startup Zippin opened a cashierless store in San Francisco, seemingly the first. Further away, in Mountain View, California, Inokyo also opened its own cashierless store last month.

Standard Market will be treated as a proof-of-concept, a testing ground for Standard Cognition, and as such, starting Monday the store will initially only be open two days a week, then three days a week later this month, a company spokesperson told VentureBeat in an email. Shoppers will also be limited to three at a time. The number of shoppers allowed in the store at one time and store hours are expected to increase in the weeks ahead.

Standard Cognition plans to sell its tech to retailers so they can provide the same experience that requires no cash or credit card or standing in a check-out line.

Paltac Corporation of Japan signed a deal in July to use Standard Cognition tech in its stores, making the company one of the first Amazon Go alternatives to strike such a deal. Talks continue with other potential retail customers, and other announcements are coming soon, a company spokesperson said.