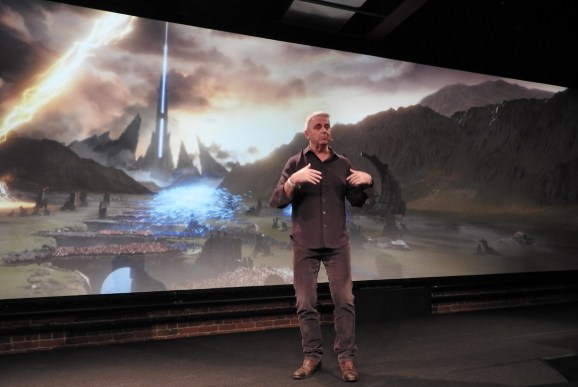 John Riccitiello says half of all mobile games are built with Unity.

Speaking at this month’s TechCrunch Disrupt event in San Francisco, Riccitiello stated that around two-thirds of all VR and AR applications were built inside the Unity engine, though he reasoned that every device on the market today was really a “beta” kit.

“They’re not cheap enough,” he explained, “they don’t work well enough, you don’t have enough good control systems, you can’t see your arms and your legs in most of them and use them in an interactive way, there’s not a lot of content.”

Despite the fact the likes of the Oculus Rift, HTC Vive, and PlayStation VR (PSVR) headsets are readily available to consumers, then, Riccitiello thinks that they’re intended for a different audience. “AR and VR is mostly to this day been launched to developers,” he said. “I mean, name the content. It’s not there yet. I think it will be there yet.”

Riccitiello continued by explaining that he had been impressed by how fast enterprise had latched on to VR and AR tech. “It’s not a surprise that the commercial applications have preceded the consumer applications because, at least in my mind, we haven’t seen a consumer launch yet,” the CEO explained.

Back in 2016 Riccitiello famously predicted a “gap of disappointment” for the VR and AR industry, in which headset sales wouldn’t match up to the lofty expectations of analysts and the market. He did, however, later predict that in a few years’ time we would see the devices that really started to breathe life into the market. It’s interesting to hear that, a year and a half on from then, the Unity CEO still doesn’t think launches like Oculus Go or sales of three million units for PSVR equate to a true consumer market.

“AR and VR is not yet a consumer smash, although it’s rising and it will ultimately get there,” he said.