Beat Games’ Jaroslav Beck recently reassured one fan that the console version will be “done by the end of this year” and that the team is “working on it full-time,” which is about all the reassurance we needed right now, though a final date would be appreciated. The PSVR edition made its debut at E3 2018 back in June and has been shown off at a handful of events since. Beat Games promises that the experience won’t suffer in the transition from PC to consoler and is even planning some exclusive content for the PSVR edition of the game. 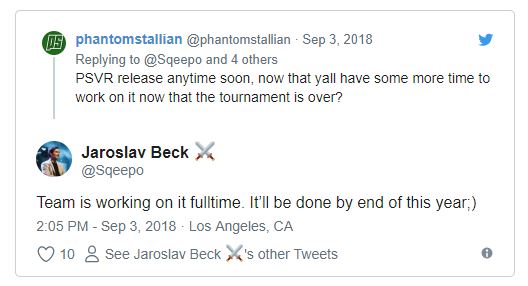 Beat Saber has taken the VR industry by storm since its launch in Early Access earlier this year. It’s a rhythm action game that has players wielding what are essentially two lightsabers, slashing notes as they arrive on time with the beat. The game’s so addictive that it’s already spawned a community of online modders making new levels and even some knock-offs of its own in the arcade and on mobile platforms. It’s now rolling out to Korean arcades, though, and the new machines look pretty impressive.

We’ll be sure to bring you more news of the PSVR version of the game as soon as we have it.