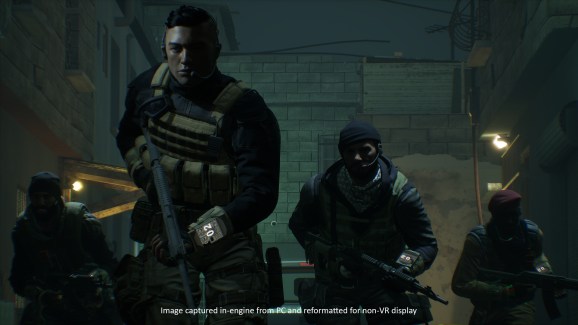 The 4-vs.-4 multiplayer shooter, which is exclusive to Sony’s headset, came in at the top spot in the U.S. charts. Firewall has been on a lot of PSVR owner’s wishlists for a long time, so we always thought it’d perform well, though the game’s late month release (August 28) does make it slightly more impressive. It also helps that it’s, y’know, really good.

These charts only represent what’s sold on the PS Store itself and doesn’t include boxed copies. Firewall also came in a physical bundle with the Aim controller, which represents the best way to play the game, and came in 11th in the U.K. software physical charts earlier this week.

Over in the EU First Contact didn’t quite finish first. Crytek’s Robinson: The Journeyand Rick and Morty: Virtual Rick-ality took the No. 1 and No. 2 spots, respectively, which is no doubt down to a summer sale that discounted both games. Firewall came in third and the usuals like Superhot and Job Simulator filled out the top 10.

Back in the US, Survios’ Electronauts, one of the other big PSVR launches of the month, managed to reached the eight spot and was only sold digitally, it didn’t appear in the EU charts.

We’re expected the Firewall train to keep on chugging in September, though big releases like Creed: Rise to Glory will no doubt put up a fair fight.