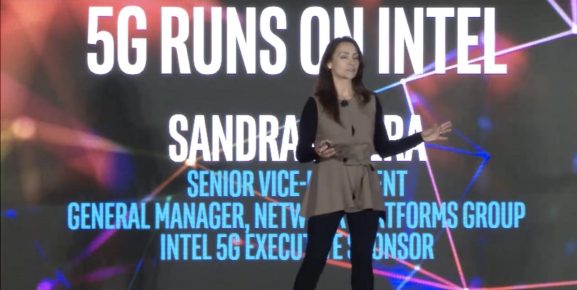 Ahead of this week’s Mobile Worlds Congress Americas, Intel today held a 5G Summit to discuss its plans for the next-generation wireless technology — a message focused almost exclusively on its role as an enabling partner for networking hardware and media organizations, rather than on consumer devices. But the event ended with an unexpected tease of a new HTC VR headset featuring Intel 5G technology.

The summit’s “5G progress report” was led by Intel’s network platforms SVP Sandra Rivera, who explained that “5G is not just a new wireless access technology” and is more complex than might initially be appreciated. While 3G was about apps and 4G was about speed, she said, “5G is so much more than that … The fundamental disruption that 5G will bring will be to move the compute [capabilities] much closer to the source of data creation and consumption.”

That will be key to empowering virtual reality, augmented reality, and high-bandwidth video, she noted, as well as ultra-low latency applications and massive IoT deployment. The implication is that powerful servers will be capable of generating superior video content for devices, as well as serving as control or coordination systems for cars and sensors, rather than requiring devices to do all of their own computing. Rivera also said that 5G will enable substantially improved data analytics.

Because of 5G’s projected massive increase in data consumption, Intel says that a fundamentally different approach to network infrastructure will be needed, and the company has an end-to-end approach. On the consumer side, she noted briefly that the company is working on 5G New Radio modems, but it’s also developing CPUs, programmable chips, memory, and networking hardware for networks and data centers. Intel is also collaborating with media partners to enhance their offerings for a new generation of video consumption.

Rivera recapped some of the company’s field trials, including that it rolled out test 5G hardware with KT, Nokia, Ericsson, and other partners at the Winter Olympics. It also ran a 5G test with Tencent in Shenzhen, China to reduce live high-definition video transport times in a stadium from 30 seconds down to 1/2 second, while giving users the ability to choose their preferred view of the action from multiple camera angles.

Representatives of Nokia and Ericsson both came up on stage at the event to discuss how their 5G network hardware incorporates Intel processors. Speakers from Fox Sports and other programming organizations discussed their collaborations to develop “new ways to serve the fan,” including virtual and augmented reality.

As contrasted with other 5G chipmakers such as Qualcomm, Huawei, Samsung, and MediaTek, the most notable takeaway from the event was that Intel was not spotlighting popular consumer products such as smartphones, tablets, or laptops featuring its 5G components. Intel showed thick-bodied 5G prototype tablet and laptop devices at Barcelona’s Mobile World Congress in February, promising that the first laptops would be released in late 2019. The company has not announced collaborations for smartphones.

Despite the lack of consumer hardware, several speakers did talk about the consumer impacts of Intel’s 5G technology. AT&T SVP Igal Elbaz said that at the U.S. Open, the network worked with Intel test components to broadcast 4K video over 5G wireless connection with the same fidelity as a wired system, and noted that they will be also working together on a 5G automotive trial starting tomorrow. Ericsson’s Jawad Manssour spoke vaguely about a collaboration with Fox to optimize network output for consumer use case demands.

Rivera asked panelists what they think will be going on with 5G five years from now, and their answers were interesting. Fox Sports’ Michael Davies said that 5G will be about the “customization of experiences,” with an approach that’s not one-size-fits-all — fans will be able to enjoy sports through TV, augmented reality, or “smell-o-vision,” which sparked laughter among the panel (but is actually coming to certain VR headsets). Robert Powers of Fox Innovation Lab added that gathering data could help the company create real-time experiences in augmented reality, and for specific locations such as college campuses.

AT&T’s Elbaz expects that 5G will augment drones and other recent technologies that are currently nascent; if you can imagine them gaining AI and networking capability, they’ll be wirelessly controlled over 5G by edge computers. Ericsson’s Manssour added that within five years — which he notes is not that far away — the technology and legislation underlying 5G will be advanced, suggesting that deployment will critically be much further along.

Intel also announced a joint innovation program between Intel and SK Telecom for 5G technologies, including “Intel True VR” for sports broadcasts, plus a collaboration with HTC on a wireless, 5G millimeter wave version of the Vive headset — one that looked like (and subsequently turned out to be) an existing HTC Vive with an Intel WiGig-powered HTC Vive Wireless Adapter attached. Rivera briefly held up the headset before saying that she didn’t want to mess up her hair by putting it on, but said demos would be available after the speech.

The event’s final speaker, Warner Bros. CTO Vicky Colf, said that she expects location-based entertainment will be turbocharged by 5G-enabled VR headsets, which will be able to use cloud computing rather than a local machine, removing the need for VR users at location-based entertainment (LBE) centers to wear backpack computers. On the video production side, she also noted that shooting content on location will be changed by the ability to get footage wirelessly from a distance without needing to transport it physically or over wires.