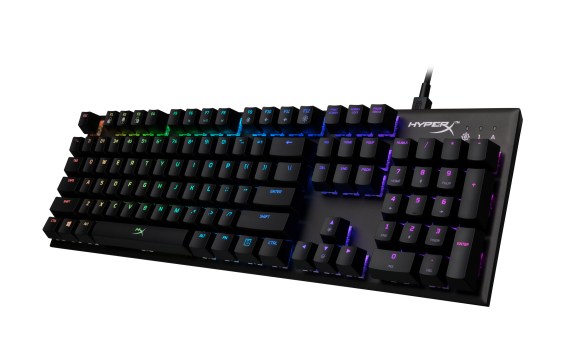 HyperX has updated its Alloy FPS keyboard with a new model that supports its NGenuity RGB lighting. The HyperX Alloy FPS RGB is available now for $110. It features Kailh Silver Speed linear mechanical switches, a steel alloy frame, and some of the best and brightest RGB LEDs I’ve ever seen on a keyboard.

This is definitely HyperX’s attempt at a premium gaming keyboard, and I think it accomplishes that goal.

HyperX hasn’t made too many alterations to its core design language to create the Alloy FPS RGB. It is essentially a spruced-up version of the Alloy FPS keyboard it released in 2016. That original device was great for  gaming, and this update is even better.

In practice, these Kailh switches feel nice to press. You can also smash them in quicker succession than you could more traditional switches.

The Alloy FPS RGB also has full key rollover, so it will never eat an input no matter how many other keys you are pressing at the same time. And HyperX also added a USB passthrough option — although it is only good for power.

The HyperX Alloy FPS RGB is one of the most attention-grabbing keyboards I’ve ever used. It looks and feels expensive, and I think that is where that $40 premium over the stock Alloy FPS comes from.

The frame that lies beneath the keys uses a sturdy steel alloy that gives the entire device a sense of heft and value. I love how the metal is almost always cool to the touch. It makes other keyboards that rely on cheaper polymers feel stuffy by comparison. 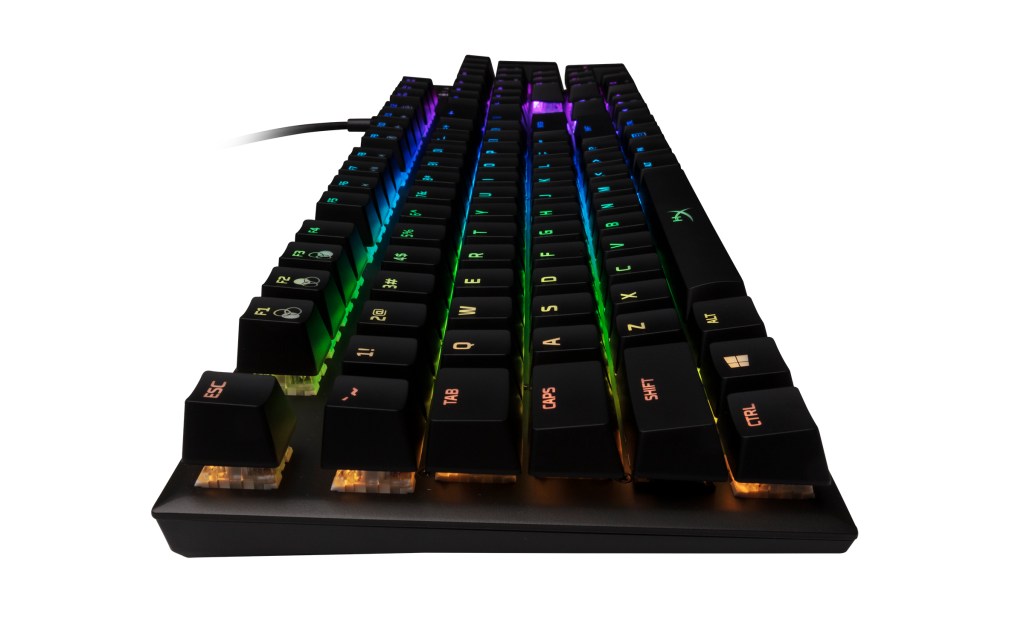 But the steel also has this excellent reflective property that makes the RGB LEDs pop. HyperX put the LED lights on top of the switch housings to expose more of their radiance than you get from keyboards that put the LEDs inside of the switches. That already makes for a brighter more vivid RGB keyboard, but then the light bounces off of the steel chassis with a powerful glowing effect that I can’t help but admire.

It almost looks like some sort of enchantment because the steel alloy seems to only reflect the LEDs. You can look right at the frame, and you won’t see your face looking back at you. The light from the keys, however, jump out and flicker and dance around the edges of the key caps

The RGB LED lighting works per key and you can store up to three profiles for how you want the lighting to work on the keyboard itself. When you are on your home computer, however, you’ll just use the NGenuity software to make adjustments. That gives you a lot of control over what the keys look like and how they react.

Not the best for long-form typing

This keyboard is great for gaming, but I’d prefer something else for typical typing work. The short travel of the Kailh Silver Speed switches can feel like you’re cutting your strokes unnaturally short if you’re typing at top speed.

You’ll get used to the travel of these keys, but you’ll still find better keyboards for productivity out there.

I’m glad that I can charge my phone while using the Alloy FPS RGB, but that does require me to plug the keyboard into two ports on my PC. If I’m going to do that, I expect to get full USB passthrough support. Let me plug a mouse into the keyboard or whatever I want.

You’ll find plenty of options in the $100-plus keyboard pricing segment, but I don’t think any look better than the Alloy FPS RGB and only a few can come close to matching it. On top of that gorgeous design, it also has plenty of features that gamers will use and love. That makes it easy to recommend as long as design matters to you more than money.

HyperX provided a sample of the Alloy FPS RGB for the purpose of this review.