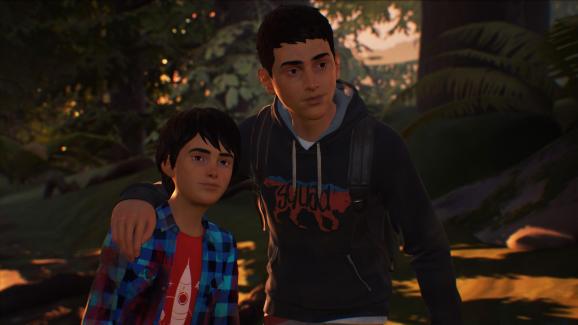 In 2015, the episodic adventure Life Is Strange won over fans with its complicated female heroes and smart take on a branching storyline. Since then, developer Dontnod Entertainment has released a prequel called Before The Storm and the free, short-form spin-off The Awesome Adventures of Captain Spirit. Now, Dontnod is preparing to release Life Is Strange 2 for PC and consoles for $40. And the studio is leaving the characters of the first game behind to build something bigger.

Life Is Strange 2 follows brothers Sean and Daniel Diaz. Sean is 16 and Daniel is 9. They are on the run after a family tragedy in Seattle. The boys are also trying to hide a mysterious power from the world as well. As is standard for Life Is Strange, players must make decisions. But as Sean, anything you choose will affect Daniel.

If you’re looking for the link in that description back to Life Is Strange, you won’t find one in the text itself. Instead, Dontnod is working to build thematic links. Those themes are social issues and the supernatural.

At the PAX West fan event in early September, Dontnod writer Christian Divine and voice director Philip Bache demonstrated an early section of Life Is Strange 2 to me. They know that players are anxious about jumping to new characters. And they explained that they are doing that because they want to build the Life Is Strange universe. When I got the chance I asked them why that is the goal.

“Because we really enjoy this particular aesthetic and the vibe,” said Divine. “The technology is there for games now—it’s a young medium, but now we need to pull the narrative in the same way as in literature and film and other things, pulling the narrative into games and expanding on that level. This is a perfect world to explore all of these—it’s like the world of the Twilight Zone. You could explore all these different social issues along with the repercussions of your decisions, and then you frame it in this really cool Stephen King supernatural framework.”

Divine explained that King’s stories always combine recognizable human emotions with the supernatural. Dontnod thinks that it can tap into something similar by using the Life Is Strange vibe as a guiding creative force.

“Yeah, we love Max and Chloe and these characters, but there are other characters, diverse characters,” said Divine. “There’s a whole world and universe of representation we’d like to get to. What other, better way than to put it in this self-contained universe, this particular style of art and animation and performance and music?”

“As much as we love the characters from season one, it’s exciting to turn on the Twilight Zone and be like, what am I getting into this time,” said Bache. “Or Black Mirror. Those kinds of things. You don’t know what’s coming. It’s almost exciting. If there’s a trust in a certain creator or a brand, like the Twilight Zone or Life is Strange, I don’t know what I’m getting into, but I have a feeling that by the end of it, I’m going to have seen something amazing.”

Keeping fans on board

Bache said he wants it to work like it does with some filmmakers.

No matter what Dontnod wants, fans are going to bring their own expectations. But the studio knows that’s the case. That’s why it created Captain Spirit.

I asked if Dontnod created Captain Spirit and gave it away for free to help fans understand what the studio was trying to do with the Life Is Strange universe.

“Yeah. Of course,” said Divine. “It’s a great entryway into this new world, without giving away any of the connections. It re-introduces you to this world and shows you how it can be different. It still focuses on social issues that everybody can kind of relate to — and those are the kinds of things that will play into how we expand the universe.”

But Dontnod isn’t putting all of these stories into the same fiction only to keep them cordoned off from one another. The studio is teasing some crossover connections.

“There’s that thread we see at the end of Captain Spirit,” said Bache. “There’s some glue that’s happening that I’m very excited for players to experience. It’s coming.”

So what is Life Is Strange really?

Divine and Bache gave me the elevator pitch for the Life Is Strange-iverse a couple of times: It’s social issues plus the supernatural. But it is also more than that.

“I think empathy is number one, honestly,” said Divine. “That’s what we’re always trying to do — is discover the characters, who they are, and not be easy, not be judgmental. That’s part of the DNA of Life is Strange, peeling the onion. Oh, this is a bad person, a stereotype. Then you start talking and, oh, maybe they’re not so bad? It’s tougher to judge them, which leads to the very interesting quasi-existential universe.”

Life Is Strange has helped define the modern adventure game. These are stories with tough choices that have no correct answers. Dontnod creates those scenarios by building empathetic characters. That is where the soul of the series lives.

“The DNA is the empathy with the characters, those feelings,” said Divine. “Understanding other people, and then creating characters that are real enough that people will feel emotions – hate, pain, love, whatever. Really, empathy is the word I would use.”