That’s a big reason why I like the game. The American Revolution is my favorite era in history. I’m reading Founding Brothers: The Revolutionary Generation by historian Joseph Ellis. It focuses on pivotal moments, like the Aaron Burr-Alexander Hamilton duel and President George Washington’s farewell address. I listen to a podcast called The Thomas Jefferson Hour, which humanities scholar Clay S. Jenkinson runs. He is also a historical actor and will take up the persona of Jefferson, portraying the founding father while discussing the events of his time and trying to give his perspective on our era.

As an American, I have an inherit interest in the founding of the country. But the characters that dominated this era — Washington, Jefferson, Adams, Hamilton, and more — have rich, strong personalities. And the events of their time, a war for independence against the greatest power in the world and then the attempt to start a democratic government, propelled them to greatness.

I also just really like all of those fancy coats.

When Assassin’s Creed II made it clear that the series would explore multiple eras in history, fans began proclaiming their dream setting. Some would say Feudal Japan (they’re still waiting), others wanted Ancient Egypt (last year’s Assassin’s Creed: Origins made that wish come true). I had the American Revolution at the top of my list. I was ecstatic when Ubisoft chose it as the setting for Assassin’s Creed III.

Beyond the setting, Assassin’s Creed III is an ambitious game. It revamped the series’ combat and traversal mechanics and added new features, such as hunting, naval combat, and the development of a homestead town.

This wealth of features would become a point of criticism with many that felt Assassin’s Creed III stretched itself too thin. The previous games, Brotherhood and Revelations, focused on a single city. Assassin’s Creed III had multiple cities, a wilderness separating them, and the homestead. Along with all the new features, it’s a big game. But nothing stands out as a standout success. As Kotaku’s Kirk Hamilton put it at the time, “nothing really works all that well.” 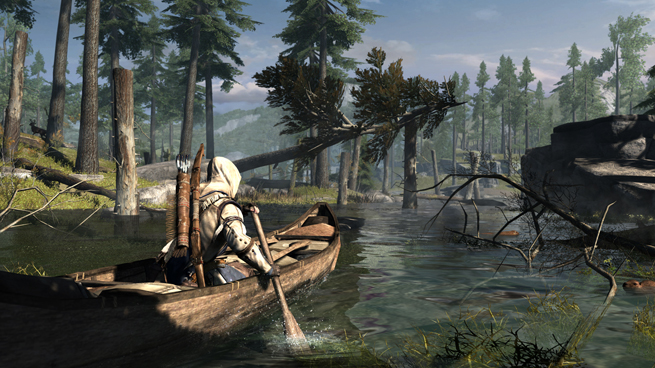 Above: Moments like this make Assassin’s Creed III worth playing.

Breaking ground and making a home

None of its features stand out as breakout successes, but some of them are special. Many gamers love Assassin’s Creed IV: Black Flag and its ship combat. You’ll often find fans and critics of the series rank Black Flag as one of the best entries in the franchise. Ubisoft is even turning the design into its own game, Skull & Bones. Don’t forget: The naval combat started with Assassin’s Creed III. Its team managed to create this intuitive system while working on a giant open-world game. That’s impressive.

I also love the homestead. Assassin’s Creed games usually focus on big cities, but Assassin’s Creed III has players living in and developing a small town. You recruit people to live there, which then gives you access to new shops and items. The homestead hosts story segments that focus on community. Compared to the “looming end of the world” feel of most of Assassin’s Creed narrative, these warmer moments are a great change of pace with a lot of heart.

Assassin’s Creed III’s long start also receives criticism. I can’t dispute its length. It takes a few hours before you’re into the meat of the game. You don’t even start as the main character. Instead, you play as his father, exploring why and how he left England for the colonies. You then follow him as he sets up a Templar order in America. I know, it’s slow. But it does a great job of setting up the game. It also gives us a sympathetic look at characters who later become villains.

So if you’ve never played Assassin’s Creed III and are already thinking of skipping the remaster because you’ve only heard bad things, reconsider. It’s not the most focused tale in the series, but Assassin’s Creed III’s ambitions produced plenty of good ideas.

And if you’re a fan of Revolutionary America like me, you really don’t have a lot of other options if you want to play a game set in the era.