Tetris is one of the world’s most beloved and addictive video games, bought and downloaded hundreds of millions of times since its 1984 debut. It’s about to make its first appearance in virtual reality, so Tetsuya Mizuguchi and his team at Enhance are doing something that no other game designers have done before.

Tetris is going on an acid trip.

Mizuguchi and his crew may be the best people to enlist for such an effort. Following his work on Sega Rally and Space Channel 5, he created the visionary rhythm-based shooter Rez, and musical block-matching game Lumines — industry landmarks for the use of shifting colors, electronic house music, and, yes, looking a bit like an acid trip.

Sony announced this PlayStation 4 game right before the 2018 Electronic Entertainment Expo (E3), one of the most important gaming events of the year. It’ll also have support for VR, making it one of the biggest games coming to the fledgling platform.

We talked to Mizuguchi about Tetris Effect and VR. Here’s an edited transcript of our interview.

GamesBeat: Take us back through Tetris Effect’s development history. Rumor has it that this game has been gestating in your mind since before the PlayStation Portable launched. Is this accurate?

Tetsuya Mizuguchi: There was a time after the development of Rez had finished and before the PlayStation Portable was released when I wanted to create a game that combined elements of Rez with the mechanics of Tetris. Nothing came of it at the time, but that idea ultimately led to the creation of a brand new game: Lumines. The reason things didn’t work out was due to issues surrounding the Tetris license, but sometime later—about five years ago—I ended up hitting it off with Henk Rogers, which is when I came up with the basic concept for Tetris Effect. A variety of concepts and ideas have been added and changed since then, bringing us to what we have now.

GamesBeat: Tetris has had many releases over the years, including some amazing Japan-only games with new play mechanics, such as Bombliss. How did you decide on Tetris Effect’s new mechanics?

Mizuguchi: We’ve done a lot of thinking about how the mechanics need to be so that anyone who has played Tetris before, no matter where they’re from, can pick this up and think “this is Tetris.” We believe that what we have is something Tetris fans across the globe will be happy with. The “Zone” element in particular is one such mechanic that we think is quite ambitious, and is an idea that we’ve racked our brains to make into something that players will enjoy the world over. It took a process of repeated testing and tuning across a variety of prototypes until we ended up with the Zone that we have now. 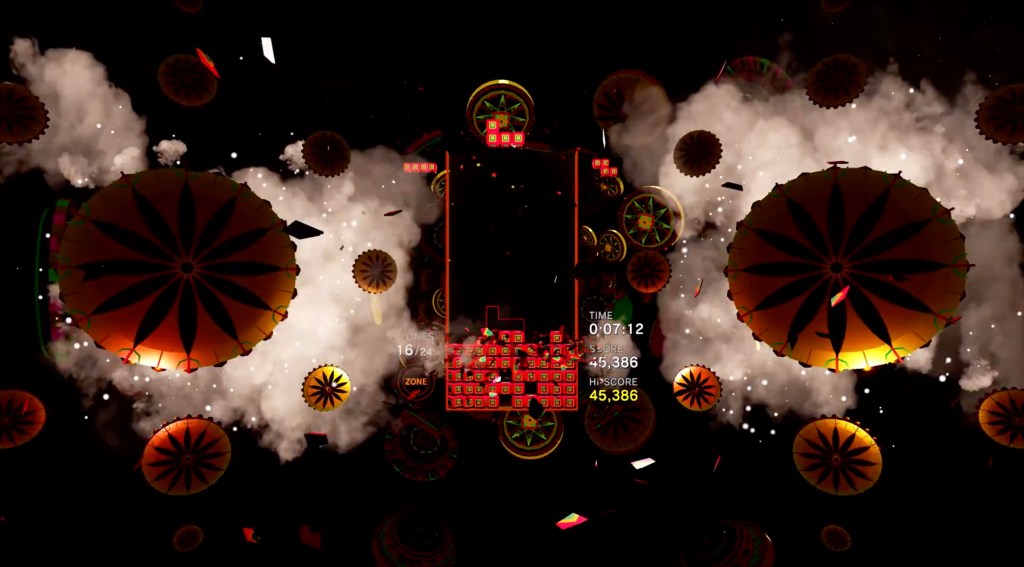 GamesBeat: Past Tetris games have been very concrete — solid blocks, solid backgrounds, predictable music. What motivated you to go with such dreamy, ethereal themes for Tetris Effect?

Mizuguchi: Our goal was to make the experience of playing Tetris feel better than it ever has before, and I think everything—visuals, music, and stage concepts—is firing on all cylinders on that front. In addition to making the experience feel good, we were also motivated to find a way to introduce storytelling into the mix. Our intent was to find a way to update Tetris into a brand new kind of experience while still keeping it comfortable and familiar to anyone who has played Tetris before.

GamesBeat: Some of the graphics look like movie-quality special effects — very different from most of your past titles. How did your team create the backgrounds?

Mizuguchi: I’m still working with the same people that I worked with on past titles. The reason we’re able to finally present things as we can now is, honestly, largely thanks to advancements in technology. Figuring out how to best visualize sound in a way that produces beautiful and entrancing special effects was a process of repeated trial and error. 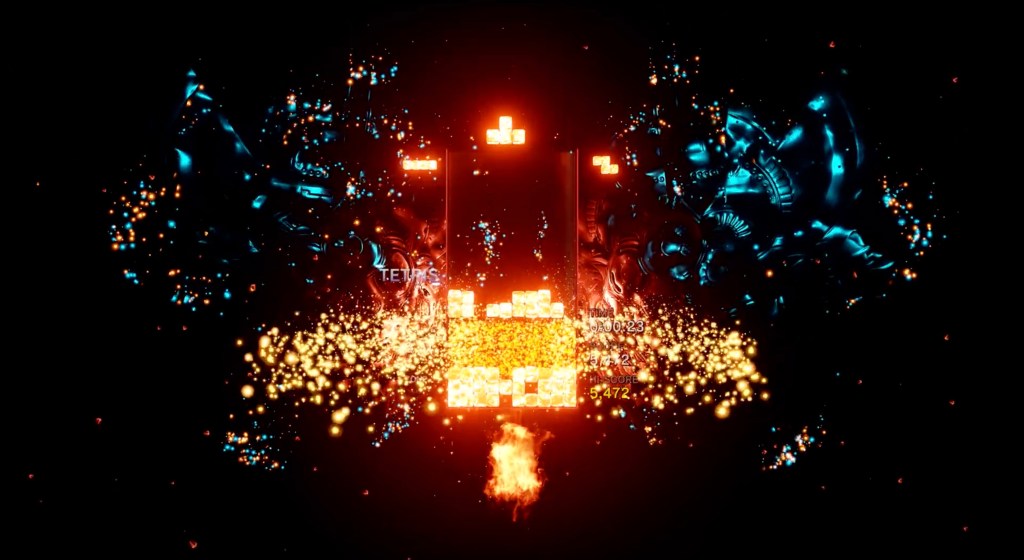 GamesBeat: You eased into 4K and VR development with the PS4 version of Rez Infinite, but created something new from the ground up with Tetris Effect. What’s different about creating a game for 4K screens, and PSVR. They’re such different types of displays.

Mizuguchi: There’s nothing in particular that we change about how we go about making things. As we continue development, we’re constantly moving back and forth between a and b. The basic idea would be that, for a, we create something that is incredible all on its own, and for b, we create something that, if enjoyed as a PSVR experience, presents the player with that special something on top. For b, we’re also taking extra care during development to ensure that people won’t experience VR motion sickness while they play.

GamesBeat: With both Rez Infinite and Tetris Effect under your belt, what “big lessons” have you learned about VR game development?

Mizuguchi: I would say we’ve learned a lot about both how to go about designing a 3D experience that feels good, and how to design a game such that it feels good in a way that is “synesthetic” in nature, blending sound and visuals. 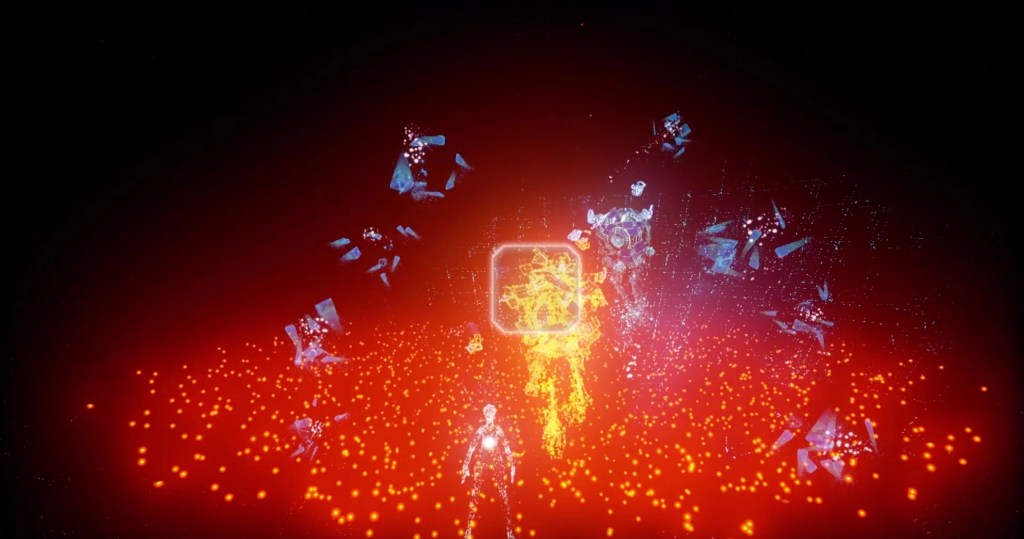 Above: Rez Infinite for PSVR brought the classic Dreamcast and PS2 rhythm shooter into virtual reality with spectacular immersion.

GamesBeat: Instead of an afterthought, music has been a central part of the game designs in many of your titles. Tell us about the role of music in Tetris Effect.

Mizuguchi: Music is an absolutely essential part of the game design in Tetris Effect. Our goal this time was to make the music more emotionally moving than ever before, to really enhance and add to the gameplay and overall experience.

GamesBeat: Is any DLC planned for Tetris Effect?

Mizuguchi: Not at the moment, no. Though if the game does well enough and we hear from fans wanting it, we’d love to consider it!

GamesBeat: Your games have deeply influenced other developers. Are you going to continue with puzzlers and shooters, or is there another genre you hope to influence?

Mizuguchi: I’d like to try my hand at a new genre sometime soon…

GamesBeat: Is there anything you can say about the VR version of Space Channel 5, which is being developed by another studio?

Mizuguchi: I’m sure it’s going to be a great time. I can’t wait to play it myself.