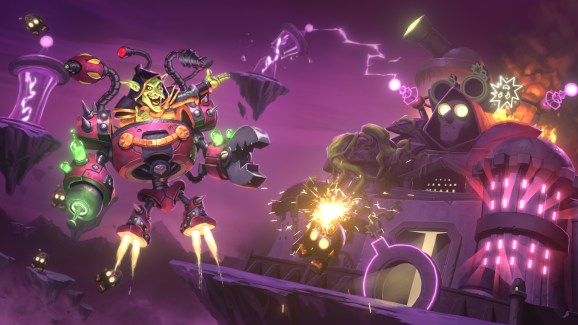 Mechs are back in Hearthstone.

Hearthstone revealed info about its future, both with new additions that Blizzard will add (including new Classic cards) and an announced upcoming feature that is now on hold (Tournaments).

Hearhstone is a big money-maker, with gaming intelligence group SuperData forecasting the free-to-play digital card game to earn $414 million in revenue this year. Updates keep its large player-base engaged (and increases the likelihood that people will spend money on digital card packs).

For the first time since its launch in 2014, Hearthstone is adding new Classic cards. These help make up the base set. While cards from expansions rotate out of the Standard formula, Classic cards are always viable in all formats. At least, that’s the idea. But some Classic cards have been so powerful that Blizzard has moved them to a Hall of Fame category, making them ineligible for Standard and part of the Wild card set (which includes every Hearthstone card made). Blizzard is releasing these new Classic cards to help fill in the gap left by moving others to the Hall of Fame.

These four new spells focus on cheap card draw. You can see them below.

Above: The new Classic cards.

Along with this announcement, Blizzard also revealed that it is stopping development on in-game tournaments. Fans have long requested some kind of Tournament Mode, and Blizzard finally announced it was working on something earlier this year. But Blizzard was unhappy with how the feature was turning out.

“Ultimately, we were forced to conclude that we needed to think about how and where we want to improve Hearthstone’s overall social experience before we can tackle adding a satisfying and robust implementation of in-game Tournaments that all players can enjoy,” Blizzard noted in a press release sent to GamesBeat. “As developers, sometimes we have to make the difficult decision to step away from a design that isn’t working. We no longer felt that the end result would deliver on everyone’s expectations or the high standards we have for Hearthstone.”

Blizzard said it will revisit the feature in the future.

Hearthstone is also working to improve the new player experience. Right now, people compete to have the highest rank possible, starting from 25 and going to 1 (and then to the Legend ranks). Hearthstone will soon add ranks 50 to 26. These will only be available to new players, which should keep them from facing more experienced opponents with better cards until they’ve learned the game and acquired more competitive cards.

Hearthstone is also getting a new Hero Portrait, Sir Annoy-o. He’ll be available to purchase as an alternative for the Paladin class during the Hallow’s End event, which starts on October 17.