Riot Games announced today that Mastercard has signed on to become a global sponsor for the League of Legends’ esports for multiple years.

The global agreement is a first of its kind for Riot, and it underscores the growing importance of esports to global brands that want to reach the right demographic with brand advertising and sponsorships. Esports is still smaller than traditional sports when it comes to sponsorship dollars, but esports has huge numbers and it increasingly reaches young demographics who are harder to reach with other kind of entertainment media.

“This is a landmark deal for us. Mastercard is going to be the first global partner of our global events. They are on board for the long run,” said Naz Aletaha, head of esports partnerships at Riot Games, in an interview with GamesBeat. “We are excited to partner with Mastercard because they are truly world class at elevating fan experiences. Look what they do with Major League Baseball, the Grammys and other events. We look for partners who share our philosophy in being fan-focused.” 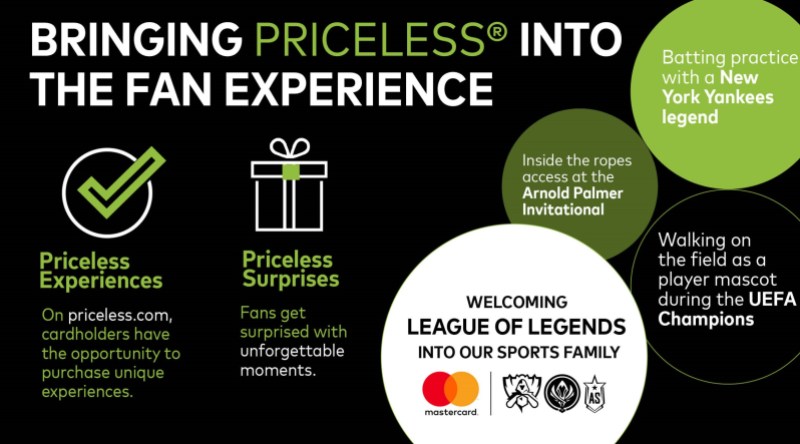 Above: Riot Games and Mastercard are teamed up.

“I have attended the events, and the atmosphere and fandom is on par with anything,” said Emily Neenan, Mastercard’s vice president of global consumer marketing & sponsorships, in an interview with GamesBeat. “That is one of the reasons why we are super excited. At Mastercard, this is a brand new audience. There was no way we could deny this is where we need to be.”

Mastercard’s support is notable because it happened after a sexist culture at Riot Games was exposed in an investigative story on Kotaku about the poor treatment of women employees at the Los Angeles company. Riot apologized and said it has taken actions to change the culture to embrace diversity.

“At Mastercard, we hold ourselves to the highest ethical standards and we expect that out of our partners as well,” Neenan said. “We have talked to them throughout this process and feel they are taking action.” 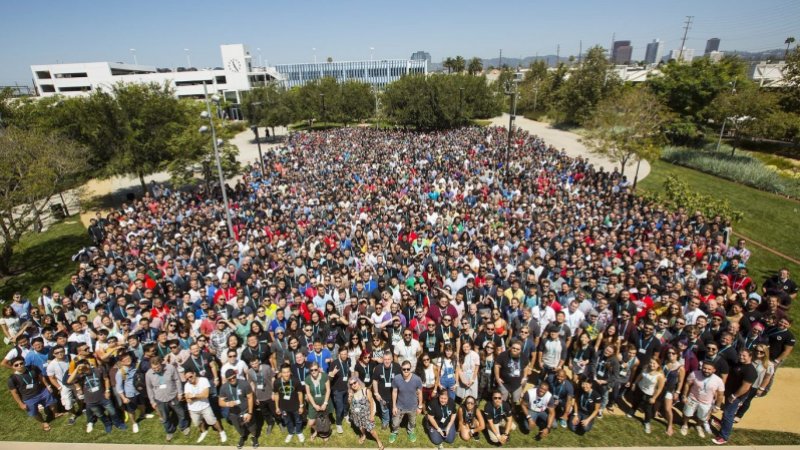 Aletaha added, “I think addressing the [issue of a sexist culture] is important to all current partners and future ones and Rioters and our player base. For us, respect and equality are going to be non-negotiable. Absolutely.”

“I think we pride ourselves on not just being a global esports league, but a rather a global sports league, and we hold ourselves to that std,” Aletaha said. “Partnerships with brands like Mastercard really validate that.”

Mastercard will curate what it calls “unforgettable, priceless experiences” and offers across onsite event activations, priceless.com and through other various promotions to bring fans closer to their passion and everything they love about League of Legends events.

The first live-event activation will take place at the League of Legends World Championship this fall in South Korea, and the first experiences available on Priceless.com will include: 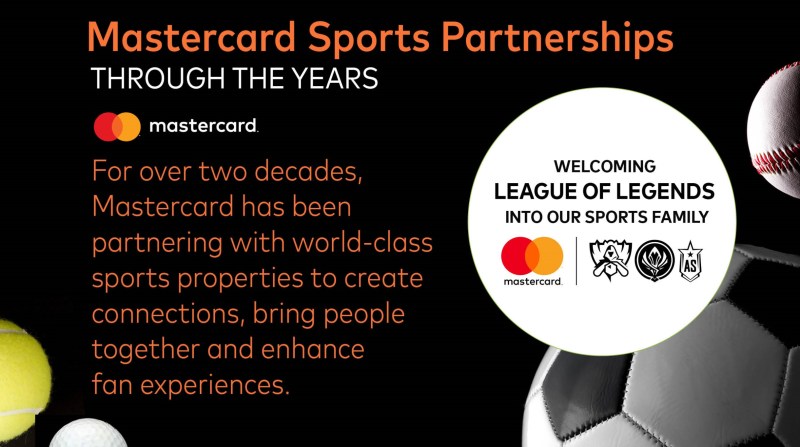 Above: Mastercard is embracing esports as well as traditional sports.

“We’ve long been impressed with Mastercard and their fan-focused approach to partnerships,” said Jarred Kennedy, co-head of esports at Riot Games, in a statement. “Our community has made League of Legends the biggest esport in the world, and we’re excited to work with Mastercard to bring them new and innovative experiences for years to come.”

Starting today, Mastercard cardholders in the United States and Canada (excluding Quebec) will have a chance to win the ultimate All-Star Event experience when they use and save their Mastercard information within the League of Legends gaming platform.

Similar promotions and additional ticketing programs will continue to roll out globally throughout the partnership. In addition, Mastercard will work with its banking partners to offer unique League of Legends co-branded products in select markets, starting in 2019.

For more than two decades, Mastercard has been a sponsor of sports and entertainment. League of Legends is the latest sport to join Mastercard’s impressive roster of premier partners, including Major League Baseball, the PGA Tour, The Open, The Australian Open, Roland-Garros, Rugby World Cup, and UEFA Champions League, among others.

Much of the participation and audience around esports is male centric, but Neenan at Mastercard said that connecting with the female audience is a big opportunity in the future.

As for threats from rivals such as Overwatch League or Fortnite, Aletaha said, “Riot is 110 percent committed to esports. We see this as a sport that will be around for decades. We’ve never been better positioned. Partners like Mastercard are globally respected and recognized and they’re partnering with us because of our scale and leadership.”

Other Riot Games sponsors include State Farm, Acer, Mercedes Benz, and others, but this partnership is the first global one. Individual teams are free to get their own sponsors.