Wargaming is about to introduce some major changes to World of Warships, the real-time World War II naval simulation that debuted in 2015. The 300 dedicated World of Warships developers have been busy creating submarines, and they’re also completely redoing the role of aircraft carriers.

Hopefully, this is going to be OK with fans, who number about 28 million in terms of registered accounts and 1.5 million who play every month. The World of Warships community is vocal and dedicated, and the introduction of these new ships will completely revamp the strategy of the free-to-play game, which relies on revenues from existing players buying 280 or so ships introduced so far on a regular basis.

Alexander Nikolaev, the publishing director for North America at the World of Warships group at Wargaming, explained why the developers are taking a big risk with the introduction of submarines. They will tease the subs with the debut of Captain Nemo’s Nautilus for the Halloween update. Then they will collect feedback from fans and introduce submarines and a revamp of carriers in 2019. [Update: Wargaming says it may come in late 2018].

With the carriers, Wargaming found that not enough players were playing aircraft carriers across all tiers of combat. It will now switch from a top-down view of air combat with multiple squadrons, and shift to a third-person view of a single squadron of planes that the carrier captain controls. That’s going to spin some heads around, but it could make the carriers more accessible. Nikolaev said all is being done in the name of keeping the game realistic, balanced, and fun. I interviewed him on Fisherman’s Wharf in San Francisco, with the wind blowing at us and the USS Pampanito (a WWII-ear submarine) in the background. 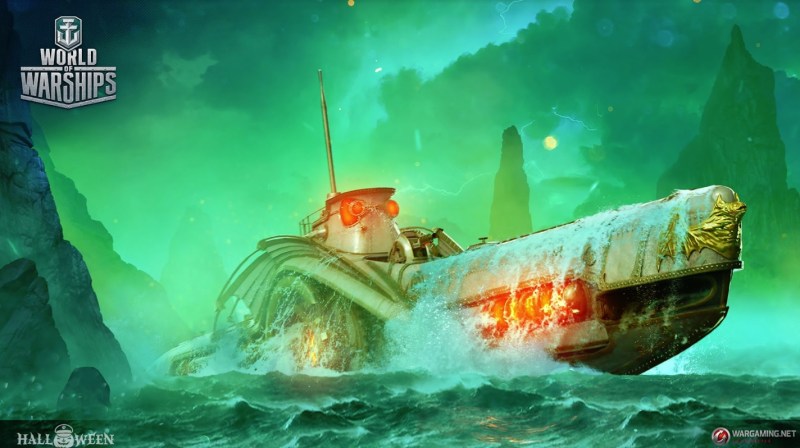 Above: World of Warships is introducing submarines, starting with the Nautilus at Halloween.

GamesBeat: How long have you been thinking about submarines, as opposed to executing on the concept, getting it in the game?

Alexandr Sasha Nikolaev: We’ve been discussing submarines since the beginning. The first conclusion was that we didn’t think that it was necessary. They didn’t fit the gameplay meta. But eventually we realized that we’d otherwise run out of content, run out of historical ships. At the moment, we already have all the major nations represented, with most of the iconic, legendary ships.

Nikolaev: Right. We have 170 ships researchable for free [with more British destroyers coming this week], and we have more than 100 premium ships. At this point we decided that if we don’t introduce submarines, if we don’t come up with a creative solution to the problem of fun and diverse gameplay, we’ll just run out of content. New content, new ship lines, are driving a lot of the engagement and new battles. So we decided we wanted to go down this road.

[Wargaming offered this clarification: This is not one of the core reasons for the introduction of submarines, but rather one possible future scenario. We have enough surface ships for a good few years of further development. However, it is true that adding submarines would add a lot of variety and a new twist into a gaming experience that many players have already been playing for more than three years. Also, everyone wanted subs and so did we – for the longest time we simply did not know how to do it right. This Halloween event is our proof of concept to the Warships community of how this class could be implemented. If the audience agrees, we will develop this further.]

GamesBeat: You knew, though, that this would shake things up. All the battleship folks are going to get their nice ships sunk from below.

Nikolaev: We think the balance should be in a form such that any ship should be universal. Any ship should be able to fight any other ship. The key to victory should be teamwork. As long as you know your weaknesses, and you know that there might be submarines going after you, you need to cooperate and play as a team with your teammates. They need to protect you from the classes that counter you.

We think that if this concept is implemented well, it should be fun for all players. They’ll find a way to work together and protect each other from submarines.

GamesBeat: And now you’re also fixing the carrier gameplay. What were the problems there?

Nikolaev: It’s something that’s very hard to predict. You never know what will work or what doesn’t work. You can analyze a lot of feedback, unstructured feedback coming from players, and you can analyze data, looking into the dry numbers. But eventually the truth is only revealed over time. Over time you see how the game evolves and what happens with the populations of certain classes, or what happens in battles when certain scenarios unfold.

After three years, we’ve noticed that unfortunately, the design concepts around carriers and the way they’re used by our players–at the lower part of the learning curve, the population of carriers is becoming very low. For example, on tier 10, it’s very hard to see any carriers playing at all. At the same time, in high-level competitive play, carriers become a must. If you don’t have a carrier you’ll probably lose, because on the competitive level, if you face a team with a carrier, a highly skilled player can destroy an entire team. The advantage is unfair.

We want to see carriers become equal, on the same level of popularity with other classes, not just a very minor niche that’s decrease over time. We want to fix that. 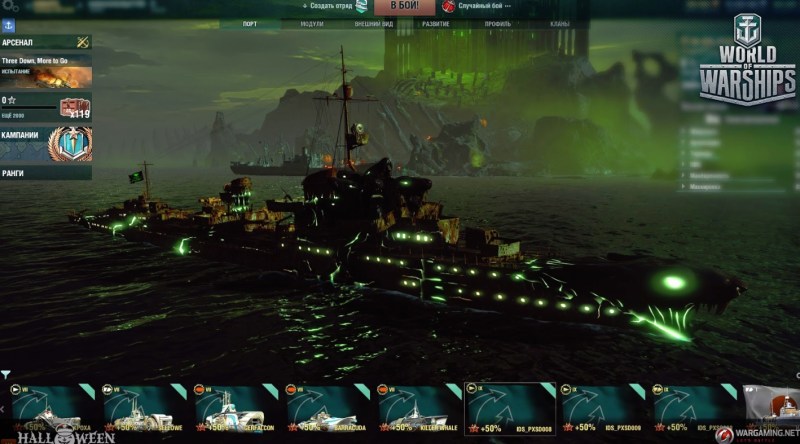 Above: The Halloween decorations for World of Warships.

GamesBeat: What do you feel you have to do with them?

Nikolaev: We have to make them more accessible. Right now, as I said, because the gameplay is very different compared to cruisers, battleships, and destroyers, it’s hard to master. There’s a lot of imbalance in skill level.

GamesBeat: This amounts to a kind of major surgery on the game. Do you feel there’s enough justification for it? In the end, will you have happier players?

Nikolaev: Our expectation is that after making these changes, this class will be more accessible, and that will make the gameplay experience for other classes more diverse. You won’t always be playing on high tiers with the same classes. You also won’t get frustrated when the carrier on your side doesn’t know how to play at the top level, and after he’s dead you know your team will just get steamrolled.

GamesBeat: But there’s still this basic rock-paper-scissors concept. Submarines restore some of the counter to battleships and carriers, it seems like. Do submarines have their own vulnerabilities?

Nikolaev: They’re super vulnerable. Once you’ve detected them and you can shell them, they’re nearly dead. The biggest threat is depth charges. Depth charges from destroyers and cruisers will be very dangerous against them. We expect that the gameplay for submarines will be full of anticipation and fear on both sides. Battleships fear that death can come from anywhere, but the submarines will fear that if they’re revealed, they’ll be wrecked very fast.

GamesBeat: When you’re testing and getting that feedback, what proved most helpful for both submarines and carriers? What did the players have to say that helped you?

Nikolaev: We’re only just starting. The test sessions for carriers only started yesterday. For submarines we haven’t gotten started yet. But as far as feedback from the existing player base, the reason why carriers were excluded from clan battles, from an entire mode — we were asked by [some of the] top clans to exclude carriers, because it had become a very one-dimensional game. It was just a game about carriers, not a game about the entire team. The team whose carrier survives wins, and the clans were complaining about it. 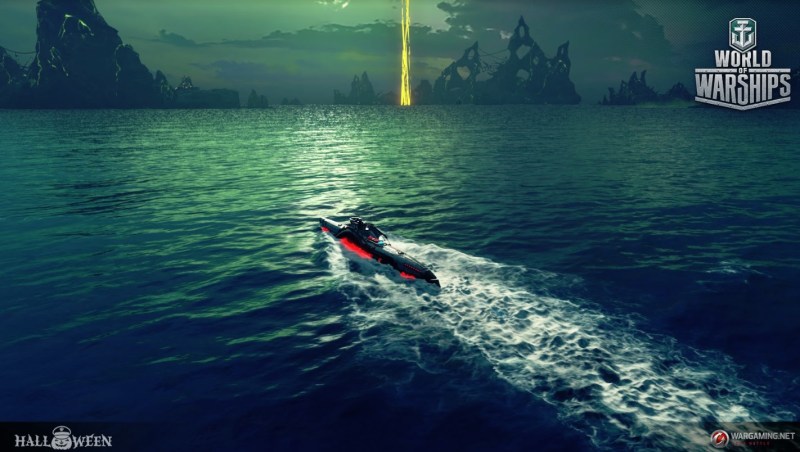 Above: Submarines can go much faster on the surface.

GamesBeat: Did you ever wish that, if World of Warplanes were still around, that could be your solution for carriers? You could have user-controlled airplanes as a balancing element.

Nikolaev: World of Warplanes was primarily a game about dogfights, though, fighters fighting each other. We’ve decided that after we rework carriers, we won’t have much dogfighting.

[Wargaming added this clarification: These sentences are both missing the word ‘initially’ and are thus too final in their statement. After we’ve made sure that the core air-to-ship combat is good enough, polished and accepted by our community, we will revisit the question of fighters and their implementation.]

It’ll be focused on aircraft versus ships, rather than aircraft versus aircraft. We’ll still have AI-controlled fighters that can be summoned as an ability — if you control a carrier, you can summon fighters to delay or destroy enemy aircraft. But it’ll all be AI-controlled. We want to simplify that mechanic, because our game should be primarily about naval action — ships versus ships or ships versus airplanes.

We have a lot of effort going into the rework of both airplanes and anti-aircraft gameplay. Right now those elements are very simple. You just set a priority target for your anti-aircraft guns and they shoot automatically. What we want to change about AA guns is adding an element of skill to it. We don’t want to make it very complex, but we want to change from a prioritization of targets to a prioritization of directions — fore, aft, starboard, port.

The more you add, the harder it is to balance. If we add more and more kinds of vehicles, the balance becomes very difficult. I know that there have been attempts to make something broader. War Thunder is trying to bring all kinds of vehicles into one battle.

Nikolaev: Right. But we want to stay away from that. That’s a corporate decision. Even if we, for example, as a product, decided we wanted to make World of Warplanes a part of our game, that would be very difficult to implement organizationally. It’s two different teams. Some of the technology we share with Tanks and Warplanes, like clans, gave us a ton of headaches in the implementation because of organizational considerations.