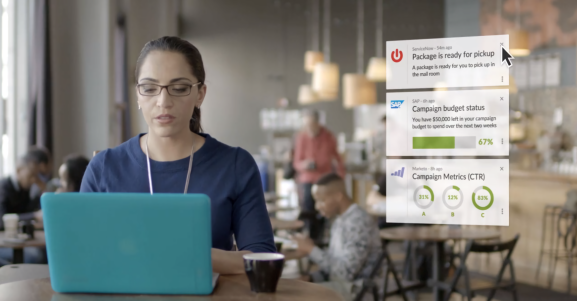 It’s a perennial problem for enterprises: too many system-as-a-service (SaaS) offerings to juggle. Firms in 2017 used about 16 cloud-hosted apps on average, up about 33 percent year-over-year, and 70 percent of those firms said they expected to adopt more by 2020.

That’s where a service like Sapho comes in. Its on-premises platform — the eponymous Sapho Employee Experience Portal — unifies disparate new and legacy software packages (without APIs, even) in a single, easy-to-use dashboard with machine intelligence.

Sapho Assistant integrates with Microsoft Azure’s Language Understanding Intelligent Service (LUIS) to enable users to ask questions using natural language. (For example: “What is the status of the ACME deal?”) Recommended Cards monitors how groups of employees interact with Sapho’s feed (such as how long they linger on a card) and, leveraging that behavioral data, surfaces timely insights. Lastly, Unconscious Bias Detection tracks decisions made through services connected to Sapho (such as paid time off requests) and informs managers if there might be a pattern of prejudicial decision-making.

“The bias tool is particularly exciting,” Sapho CTO Peter Yared told VentureBeat in a phone interview. “We can get access to age, race, gender identity of every individual. It can detect organization-wide if there’s unconscious or latent bias.”

And the time savings that comes from navigating systems and searching for data is likely to be substantial, ElNaggar claims. He estimates that employees spend about 20 percent of their work week gathering information they need to do their job.

Also on the way: an extension that automatically learns the thresholds for different employee groups and adapts notifications to ensure they aren’t bombarded with messages.

“The lack of employee engagement in today’s enterprises is impacting companies’ ability to attract, empower, and retain employees,” ElNaggar said. “It’s a reality that companies can no longer afford to ignore as poor employee engagement impacts customer experience and ultimately the bottom line. A big part of employee dissatisfaction comes from the non-essential tasks and data searches across systems that not only annoy workers, but eat up huge chunks of time that are better spent doing the job a person was actually hired for.”

“Unlike the technologists trying to find a problem for special AI to solve in the enterprise, we believe that weaving machine learning into existing workflows will redefine how employees work and will ultimately deliver on the promise of intelligence augmentation,” Yared said. “[Our platform] … re-engage[s] the workforce and unleash[es] employee potential.”