Right now is a great time to build a new gaming PC. Memory prices are still high, but we have a glut of great CPU, GPU, and storage options that do more than most people will need. We’re definitely in the mature part of the PC component cycle, which is why Nvidia is trying to reboot it with RTX. When it comes to displays, however, things are a lot messier. After perfecting the 1080p 60hz monitor, manufacturers don’t seem confident about what they should do next. That’s why the CJG5 from Samsung is so impressive. It has a narrow focus where it excels, and it doesn’t even try to do the stuff it would have to skimp on.

The CJG5 is launching this month from Samsung. It comes in 27-inch and 32-inch versions both of which have a 1440p curved VA panel with a 144hz refresh rate. This is also a gaming monitor. That means Samsung has focused on low latency. The company promises a 1ms response time with all of its gaming modes turned on. Other features include a 3,000-to-1 contrast ratio.

But for all of those features, I’d almost define the CJG5 based on what it doesn’t have. Samsung did not include HDR/DolbyVision or Gsync/FreeSync. Those are marquee features. But by not including them, Samsung is able to keep the price down while also ensuring the display still looks as sharp as possible. So you can get the 27-inch version for $330. To get the 32-inch model, you’ll need to drop $400.

So does the CJG5 make sense? Yes. I tested the 32-inch version, and it has blown me away.

Now, the CJG5 does have to drop the HDR and FreeSync to get to that price, but that’s more than fine with me. HDR on Windows is starting to come together, but the HDR really seems like it’s going to need OLED to work well with PC. I say that because our massive 50-to-70-inch TVs rely on local-dimming arrays to brighten certain parts of the screen while others remain dark. Even when you have a lot of local-dimming LEDs in a monitor, the smaller 32-inch size makes it more difficult to dim just one part of the display.

On top of that, most HDR monitors only meet the basic VESA DisplayHDR 400 standard. And even DisplayHDR 600, which is the next level up, doesn’t feel bright enough. While I want to see more HDR PC displays, I would tell most people to wait to go DisplayHDR 1000 or bust.

FreeSync is great … with AMD GPUs. And while I like the Radeon RX 580 and the Vega 64, I would probably want to keep using Nvidia’s GeForce GTX 1080 Ti or the newer RTX cards. So, for me, FreeSync wouldn’t do anything. I likely wouldn’t even consider this monitor.

Sure, Samsung could add Gsync instead. But shaving that out of the box is going to save you $100 at least. And I think I might take the cash for a 1440p display. If you have the GPU power, driving that resolution is fairly cheap. And you won’t usually need frame-syncing tech to eliminate stuttering and screen tearing if you’re doing anything over 60 frames per second.

And that’s been my experience with the CJG5. Even without frame syncing, the image always has a fluidity to it that matches or surpasses my 4K 60hz Gsync display. I haven’t even once wished that I had that Gsync or FreeSync — especially if it would mean a more expensive price tag. 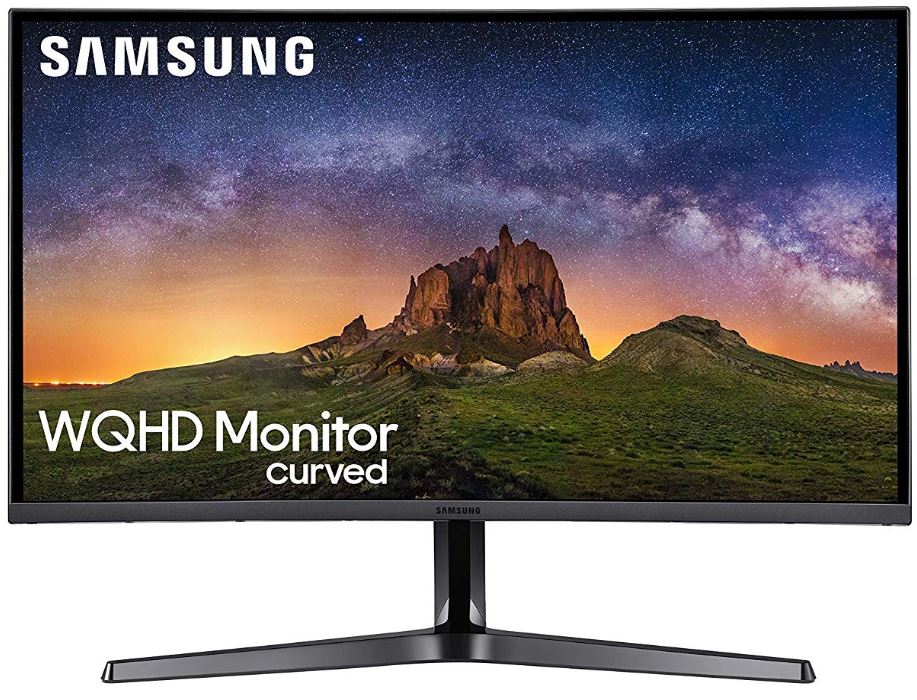 Above: The Samsung CJG5.

Just because the CJG5 doesn’t have HDR and frame syncing doesn’t mean it can’t have a gorgeous display. Samsung is still using its QLED tech. It also used the money it saved from excluding expensive features to ensure that the screen looks great right out of the box.

It turns out that you can still do a lot to make a “regular” monitor look great. The VA panel is vivid and sharp. I put it next to a similar 32-inch monitor with HDR, and Samsung’s color reproduction often made the difference difficult to notice. The 3,000-to-1 contract ratio also does a great job of making blacks look deep and rich.

For a VA panel, the CGJ5 is about as fast as they come. In its gaming mode, it can do 1ms response time, which is on par with most TN and IPS monitors. But it also has the wide viewing angles and robust colors that the tech is known for.

If you are upgrading from the 1080p 60hz monitor that you bought more than five years ago, the CJG5 is going to astonish you. Essentially, Samsung has taken the most expensive monitor from a couple years ago, spruced it up, and repackaged it as its entry-level gaming option. That’s awesome.

You may feel left out soon

The’s CJG5’s strength is also its weakness. I do love that Samsung didn’t inflate the price just to include the HDR and FreeSync bulletpoints. But monitor tech is going to continue to improve rapidly. This is the first year that we’re getting a lot of HDR Gsync/FreeSync monitors. By next year, Samsung may start focusing on OLED. The year after that, those OLEDs could drop drastically in price.

You get the idea. It’s great that the CJG5 doesn’t have wasteful features, but what if Samsung was able to do really great local-dimming HDR instead.

This isn’t really a problem with the CJG5. Instead, it’s just how I feel about buying a monitor in general at the moment.

I think it’s fair to expect a monitor to overcome the sense that the future is yet to come. A company like Samsung needs to do everything it can to make me feel great about making that purchase. The CJG5 does that. It has a great picture for a great price. And of all the features I would want in a non-4K monitor, I would take 144hz over HDR and frame syncing. This monitor delivers that with low latency at $400.

So I think that Samsung makes a strong case for this display. And that feels an oasis in the monitor desert. Sure, the future is yet to come, but you won’t regret the CJG5 if you have to buy something today. Even more than that, I think you’ll end up loving it.

The CJG5 monitors are launching this month for $330 at 27 inches and $400 at 32 inches. Samsung loaned a C32JG5 to GamesBeat for the purposes of this review.