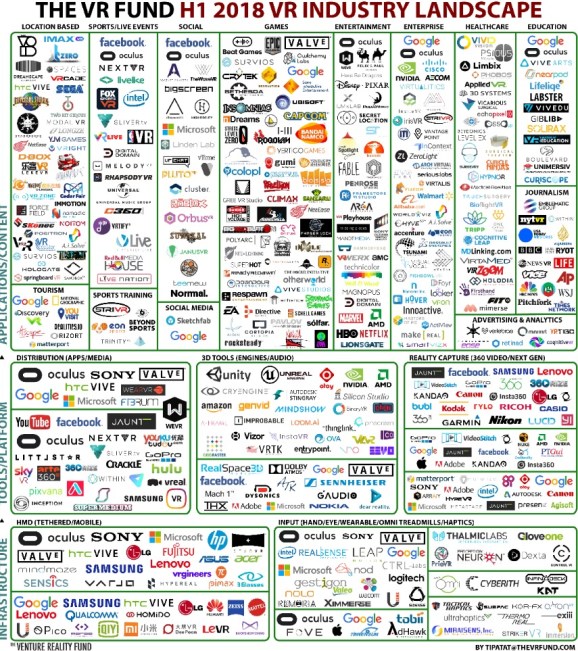 The VR Fund's VR industry landscape for the first half of 2018.

Tipatat Chennavasin, general partner at The VR Fund, said in a statement that most of the investments went into VR startups in location-based entertainment, gaming, enterprise and healthcare.

“VR is definitely spreading its wings and not slowing down,” Chennavasin said.

One of the biggest successes so far in VR games is Beat Saber, which so far is the fastest selling VR game to date. In addition to home use, 168 arcades in 24 countries are holding tournaments for Beat Games’ hit title, making it a new kind of esport.

The company has a launch on PSVR by the end of the year, and Chennavasin expects the title to be one of the most successful VR games to date. There are now over 47 titles which have generated over $1 million in revenue with some companies making over $10 million in the VR consumer market, he said.

For location-based entertainment, while IMAX VR has closed down two of its locations, the Void and Sandbox VR are continuing to expand, and major players like Spaces and Two Bit Circus have had successful launches with VR arcades.

“On the enterprise side, we are seeing VR proves its return on investment and go from pilot test to major deployments with Strivr leading the way showing impressive results for Walmart, Wendy’s and others,” Chennavasin said. “Also new players like Vantage Point are showing how VR can be used to tackle some of today’s biggest issues like sexual harassment in the workplace.”