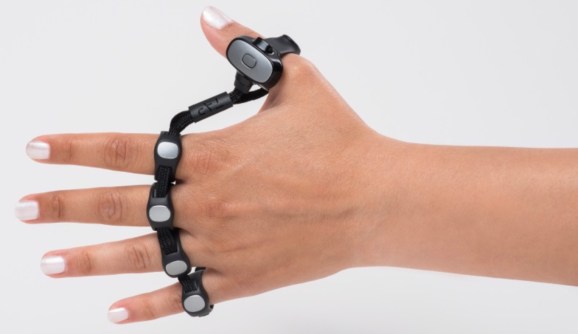 The Tap Strap rings go on one of your hands, with a larger thumb-based wireless transmitter linked by thin cabling to four finger-sized bands. When used on any surface, input from the rings is transformed into keystrokes, mouse movements, and clicks that can be used on conventional PCs or in VR environments.

Tap’s approach has obvious potential utility for VR applications — particularly when a user might be walking around rather than sitting at a physical keyboard. It’s a challenge to type on a standard or virtual keyboard while wearing a VR headset, in the former case because you can’t see it, and in the latter because you can’t feel it. Assuming you get used to one-handed typing with Tap and don’t have a comparable voice dictation or navigation option, using direct finger input could be a more comfortable solution.

The Tap Strap is currently priced at $179. Certified by Tap for use with HTC, Oculus, or Windows MR VR headsets, it requires a Windows 8.1 or newer PC with at least Bluetooth 4.0 and promises eight hours of typing time between recharges in its included carrying case.