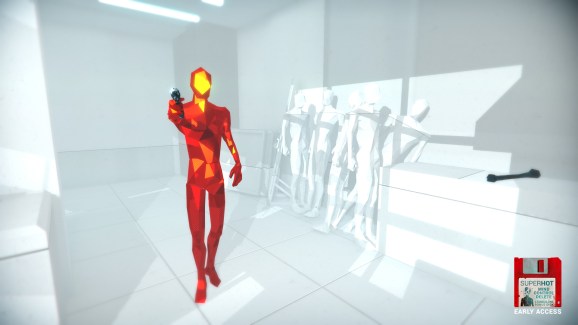 Superhot, one of VR's success stories.

In over two years as CEO of Admix, an AR/VR company, I have attended well over 100 events, pitched investors, and given countless interviews. By far the most common question I get is “What does VR need to get to the next level?”

Industry people have different theories about it. Some say hardware needs to get better. Some people think the price needs to drop. These are fair points. But no magic feature, or price point, will suddenly propel VR mainstream. Some people think it is a lack of content. But as of August, there are over 5,000 VR apps available. Granted, it is far from the 5 million apps available for smartphone, but it is not insignificant. Of these, about 70 percent are games, representing thousands of hours of content for the 1.2 billion self-proclaimed gamers to choose from. Yet, we count less than 11 million monthly VR users.

The core of the issue is that VR remains a nice to have — even for gamers. They know VR is something cool, but they feel no urgent desire to play it or come back to it, let alone buy the headsets. Why? In his book Decoded, author Phil Barden explains that purchase behavior is governed by a simple equation: we buy if the expected value of a product is higher than the pain of parting with our cash. Today, customers do not know what value to expect from VR. The value proposition is unclear, and therefore, they do not feel the “fear of missing out’” (or FOMO) to drive their purchase. That is what VR is missing: a burning need, to use it to solve a problem the customer has. VR needs to instigate FOMO.

We all know that VR has the potential to solve real world problems — this is already being done in many industries, from entertainment, training or education. But most consumers are not aware of that. This is an education and messaging problem, that translates into low sales. The industry needs to get better at showcasing the value of VR. This is no easy task, because VR has no benchmark. When it first came out, it was clear that the smartphone was a better version of the feature phone. Its value proposition was clear. Instead, VR is a media revolution, unlike anything customers have experienced before.

At a high level, what VR provides is the capability to experience the world as it really is, in 3 dimensions, instead of projected in 2D. Trying to explain VR to a consumer without a headset is like trying to explain what cinema is using words. The concept can easily be explained, but consumers only understand the value after experiencing it, and it is down to the developers to craft addictive apps that instigate that sense of FOMO.

Getting users to experiment VR is one thing, but building an app that people crave over and over is another. To be successful, apps need to instigate fear of missing out among users, like Facebook, Instagram or Snapchat do, leading you to refresh your feed multiple times a day.

How to build FOMO in VR? As always, there is no magic rule, but there are a few rules developers must follow if they want to create long term engagement with their audience.

Do not compromise on quality

It may seem obvious, but needs to be reiterated. Customers are unforgiving when it comes to quality of the experience, especially in VR where a poorly crafted app can lead to motion sickness. “Quality” means an experience that is bug free, user friendly, without lag, that doesn’t make them sick. Anything less than that, the users will not use more than once, and your app will fall into oblivion.

Even if you are working on a tight budget: do not compromise on quality. Remove some features, or shorten the experience – but what you present to the consumers must be flawless. The game Panoptic, for example, operated on a tight budget, so they decided to release one single level instead of many unfinished levels. As a result, they were able to polish the experience and win multiple industry awards.

Great experiences are built on what VR can offer best: experimenting content in 3 dimensions. In other words, experiences need to be built for VR, and for VR only. If customers can find the same experience on the web, or a console, they won’t bother using VR, because the friction isn’t worth it — remember, the desire to purchase or use is inversely proportional to friction.

Take VRChat for example, the popular virtual communication app with up to 20,000 concurrent users. Since they also have a desktop client, which delivers a fairly similar experience, only a fraction of users actually connect with VR headsets (the author estimates to 10 percent). Alternately, games like Beat Saber and Superhot got popular because they can’t be played on a console. Everything from the gameplay to the design has been built exclusively for VR. Game designers need to think VR first, leveraging the 3D canvas and hand controllers, to craft experiences exclusive to VR.

Being unique to VR is key, but it’s not enough. To create that FOMO feeling, the experiences need to change from a ‘nice to have’ to an absolute necessity, and preferably something people need to use regularly. For this, the best way is to solve a customer problem — and preferably something that customers will use frequently. Ask yourself: how can I solve a problem people have, in a unique way using VR?

As discussed, VR enables customers to visualize data or experiment things like never before. Therefore, building experiences where the third dimension brings incremental value is key. If it is a game, make use of the entire space, do not just do a standard FPS. If it is a sport experience, immerse us among the players; do not put us in front of a flat screen. If it is an educational app, enable us to interact with the content using the controllers. Bottom line, find ways to better the experience using the uniqueness of VR.

For example, Bigscreen enables users to visualize their PC screens in VR, making it a lot easier to work on multiple tabs, share screens with colleagues, and multitask. This is something that only VR can provide, and unsurprisingly, Bigscreen power users spend 30 hours per week in the app, a retention unheard of, according to their CEO. VR apps that have succeeded at this are still very rare — and they are much needed to push the industry forward.

This advice might sound obvious: to be successful, create value that users cannot get anywhere else. In practice, it is difficult task, and way too many apps fall short here. Ask yourself: Am I solving a problem? Am I solving a real problem? Is the need for my solution strong enough for people to put on their headsets multiple times a day, or even better — convince them to buy it? The transition to immersive technologies will depend on many factors, but one thing is sure: VR needs to instigate a sense of FOMO to move away from a nice to have, and become something fully integrated with our lives.

Samuel Huber currently serves as the CEO of Admix.in, the first monetization platform for VR/AR. He is passionate about how frontier technologies will affect consumer behavior, and frequently speaks at conferences about the future of the industry.