Sony’s PlayStation brand web-slings into the lead when it comes to the most-viewed TV commercials for the gaming industry. It beats out previous chart-topper FoxNext Games to own almost a third of all industry TV ad impressions. 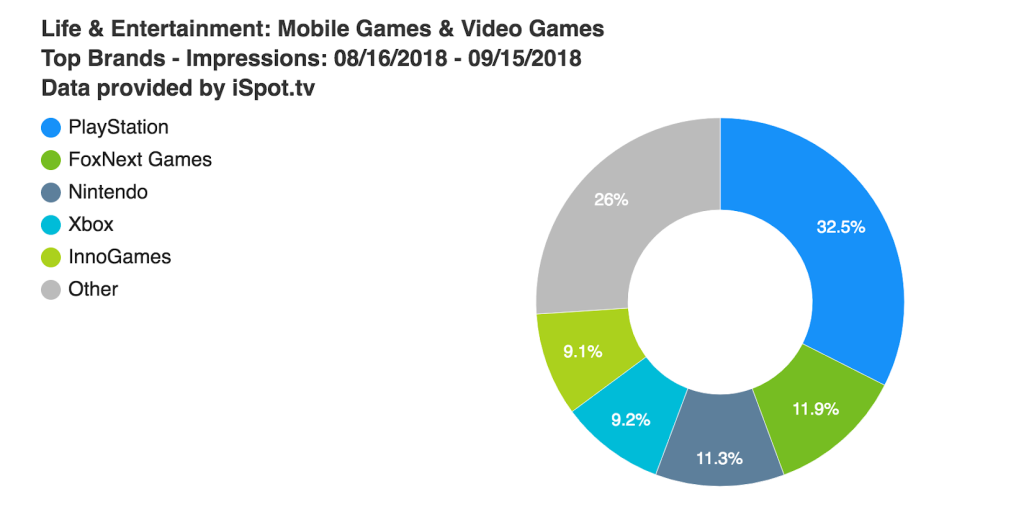 Below are the top five most-seen gaming industry TV advertisers from August 16 through September 15.

Once again overall TV ad impressions increased for the gaming industry, up to nearly 2.8 billion from the previous period’s 2.1 billion, with 33 brands spending an estimated $36.9 million on 68 commercials that ran over 15,600 times.

PlayStation scored an impressive 901.7 million impressions from its four commercials that aired over 2,400 times, and “Marvel’s Spider-Man: Gameplay Launch Trailer” was the most-seen with 543.2 million impressions. A sports-loving audience was most likely to see PlayStation’s TV ads, with top impressions coming in from programming such as college football, NFL football, and SportsCenter, while top networks included ESPN, Comedy Central, and FX.

At No. 2: FoxNext Games with 331.3 million impressions racked up by two spots that aired over 3,200 times. Once again, “Assemble Your Squad” had the most impressions (207.1 million). Some of the top networks for FoxNext: Velocity, History Channel, and Independent Film Channel (IFC), while top programming included American Pickers, Bitchin’ Rides, and NFL football.

Third place goes to Nintendo with 314.8 million impressions generated from 12 commercials that ran over 2,600 times. The most-seen spot was “Extending Summer,” which garnered 120.6 million impressions. Disney Channel, Comedy Central, and Cartoon Network were some of the top networks for Nintendo, while top shows included SpongeBob SquarePants, The Office, and The Amazing World of Gumball.

Xbox takes fourth place with 255.5 million TV ad impressions from just two ads that aired over 1,200 times. “Shadow of the Tomb Raider: Become the Tomb Raider” was by far the most-seen, with 212 million impressions. Some of the networks Xbox prioritized were ESPN, Fox, and MTV, while specific programming that generated high impression numbers included NFL football, college football, and South Park.

Just slightly behind Xbox to round out the chart: InnoGames, with 252.7 million impressions. It aired four spots over 1,100 times, with “Develop Your City” being the most-seen (163.9 million impressions). History Channel, Fox News, and NFL Network were three of the networks generating the most impressions for the company, while top programming included American Pickers, NFL football, and America’s Newsroom.