The study of the performance of mobile media sources for the first half of 2018 collected data from 295 media sources, 8,200 apps, 14.5 billion installs, and 25 billion app opens. In this new report, AppsFlyer is now able to offer gaming data segmented by genre (casual, midcore and strategy, and casino and gambling), as well as grouping non-gaming into life and culture, utility, and shopping apps.

The key findings of the study are as follows. Facebook remains the No. 1 media source for mobile app marketers, with a staggering three out of four apps with a marketing budget running campaigns there.

But Google’s share in the non-organic app install pie has increased by an impressive 23 percent worldwide.

“With the latest Performance Index, AppsFlyer is offering marketers an in-depth look into the state of app marketing performance across the globe,” said Paul Wright, AppsFlyer’s managing director in Europe, in a statement. “To better understand the regional shifts in the media landscape, we have introduced an index that is all about growth, which combines several growth factors that indicate a network’s success. We have also included an ‘Up and Coming’ ranking which will allow marketers to explore options outside the current industry leaders. In a market that is so fast paced, we felt that this was a vital tool for marketers and they will be able to draw on all of this insight to make an informed decision about their partners.” 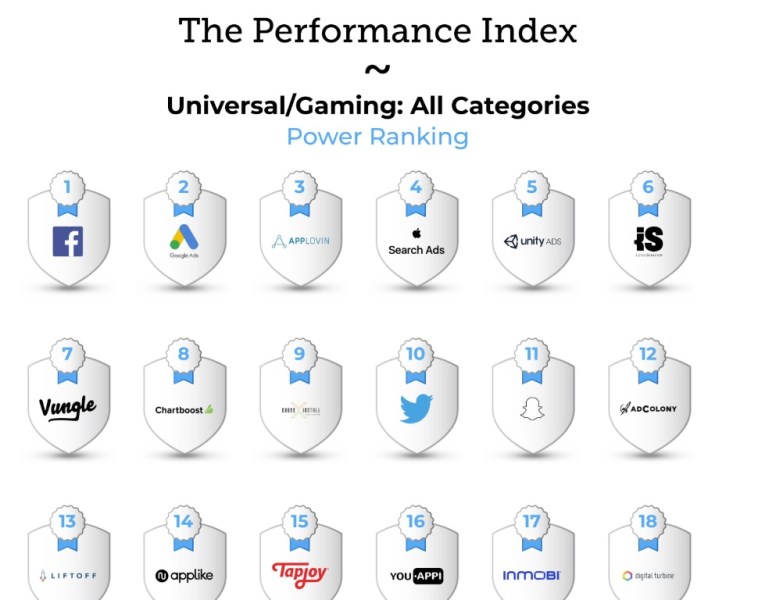 Above: Facebook is still No. 1 in mobile app and game marketing.

This was mainly driven by emerging markets in Latin America, India, and Southeast Asia. Google’s focus on mobile and the introduction of Universal App Campaigns (UAC) late last year also contributed to its gains.

Although recent indices may seem similar, there has been plenty of movement over time, as media sources refocus or gain or lose ground as a result of competition in the landscape.

AppsFlyer also found that mobile app install fraud is still a huge challenge for the industry, and this has continued to intensify in recent years. Non-gaming apps have a four times higher rate of fraud than gaming. Shopping is most affected, followed by lifestyle apps.

When comparing gaming indices to the current ones, there are now about 20 percent fewer networks, reflecting some consolidation in app marketing for games. Gaming is becoming a specialty, and gaming app marketers have a pretty good idea of how and where their budget should be spent.

IronSource saw an impressive leap. The company has made a jump from 12th to 6th in the universal gaming ranking, which is mainly attributed to its significant improvement in quality, as well as growing its video and playable network. Also, the company has also performed an aggressive anti-fraud cleanup.

Snapchat is gaining ground. Snapchat has jumped five spots into 4th place in the volume ranking, and from 16th to 8th place in the power ranking. When looking at return on investment, Snap came in at No. 1 in the casual gaming category. Growth was driven mainly by India, Eastern Europe, and Australia.

Apple Search Ads are now a mainstream media source, just behind Google and Facebook. The prime App Store real estate is lucrative for marketers keen to get in front of the competition.

Retargeting networks have dropped in quality. Facebook and Criteo dominate the mobile app retargeting as far as client adoption and volume is concerned. However, their relative quality compared to other networks has dropped since the previous retargeting index.