Last year, Umbra unveiled a tool called Composit that will let you upload a complex 3D model to the cloud and then view it on any device. Now, the Helsinki, Finland-based company is showing how it can create a huge web-based virtual model of a city that can put something like Google Maps to shame.

Umbra claims its tech could scan the whole world down to the detail of a single grain of sand. It could be done via a kind of crowdsourcing, using only people with smartphones who use their devices as scanners. That might sound outlandish, but the company is already well under way with that mission in its native Finland.

Today, Umbra is releasing tools for enterprise customers to easily optimize massive 3D datasets and stream them to any device. In the near future, Umbra’s tools will enable creating a photo-realistic virtual model of the entire planet that’s accessible by everyone on any device from anywhere on the globe.

“It has taken us 15 years of research and work with the most demanding users in high-end 3D graphics, such as the creators of Fallout and Call of Duty, to create this technology,” says Otso Makinen, CEO and cofounder of Umbra, in a statement.

Umbra’s cloud service allows anyone with a camera or a drone to scan their surroundings and share a high-resolution 3D environment with other people. For professionals, this makes it a lot easier for dispersed teams of engineers and product designers to work on the same project without having to be tethered to a powerful workstation computer. The embedded video of Cologne shows what the Composit tool can do.

In June, Umbra announced that together with the city of Helsinki, it is digitizing the Finnish capital into a texture-mapped 3D mesh, with the possibility of streaming it in real time to web browsers, mobile devices, and AR and VR headsets around the globe. As the first company to make a 3D model of an entire city truly accessible as open data, Umbra is now taking the next step towards powering the recreation of the entire planet in high-resolution 3D. The company is today releasing tools that automate the optimization of massive scanned 3D datasets and can stream them to any device.

The process works like this. The user installs Composit and uploads a project with a single click. The file is then viewable instantly on any piece of hardware in real time. Composit is a fully automated, cloud-based solution that allows you to load complex engineering and product design images and view them on devices such as mixed reality headsets.

“This technology will disrupt the existing 3D mapping and scanning industries in a big way,” said Shawn Adamek, chief marketing officer at Umbra, in an email to VentureBeat. “The next-gen 3D digital twin of the real world could be crowdsourced by consumers with mobile phones.”

This new addition to Umbra’s Composit platform will enable the storage of super-high-resolution 3D content in the cloud and streaming directly to end-user devices at levels of quality that exceed other solutions on the market. Imagine 3D with every blade of grass and every grain of sand in perfect detail. In addition, the scanned data seamlessly integrates with architectural and building information models (BIMs) — allowing architects and construction companies to combine photo-realistic scans of the real world with building design models.

The platform is based on a novel and patented approach to 3D streaming, originally conceived while Umbra developed solutions for the high-end PC gaming industry. After years of intensive R&D and collaboration with industry-leading architecture companies, Umbra’s platform is now mature enough to easily process 3D datasets that are dozens of terabytes in size and deliver them directly to mixed-reality and mobile devices, web browsers, and even the Unity Game Engine at photo-realistic resolutions as high as 100 megapixels. Performance is also paramount, especially on mixed-reality devices, and Umbra delivers super-high frame rates that are comparable to even the highest end PC games. 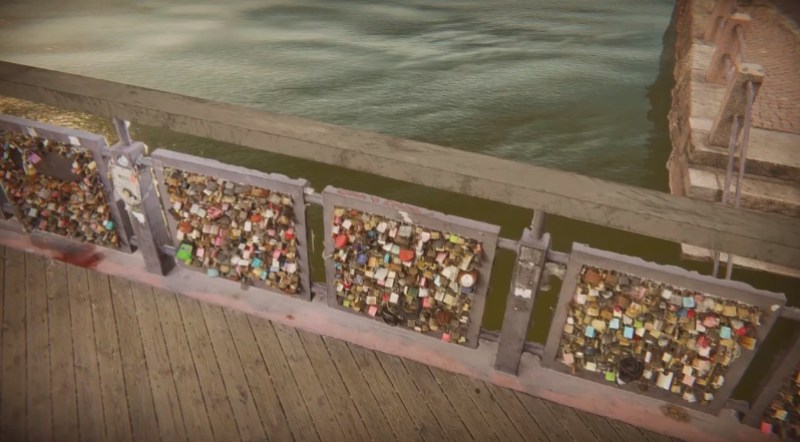 Above: I’ve been on this bridge in Cologne, and it looks like this scan.

Umbra was founded in 2007, and it has used its expertise to create 3D optimization for real-time triple-A game publishers that have content running at 60 frames per second. Now, the company has turned that technology to work with complex 3D models.

Composit works alongside popular authoring tools, such as Autodesk Revit. Once installed, Composit makes it possible for users to “umbrafy” — automatically optimize complex 3D models with a single click — projects from their Revit 3D View instantly. The umbrafied content is then pushed to Umbra’s cloud, where it can be shared to virtually any internet-connected device that has a web browser.

Adamek said that the tech enables architects and designers to accelerate revision cycles with colleagues, clients, and other stakeholders. Composit makes it easy to resolve design conflicts and reach consensus on time and on budget.

Adamek said of the demo, “It illustrates our new capabilities to easily upload any massive 3D data set (buildings, cityscapes, objects, interiors, etc.) and stream that data at ‘single grain of sand’ quality to mobile mixed reality, and browser-capable devices. Check out the bridge planks in the video with sand on them.”

Of course, the R&D continues for Umbra in its quest to make this enterprise-quality technology available to consumer markets in the near future. Plans for the future focus on enabling anyone to capture 3D data using their mobile phone cameras, which continue to increase in resolution.

“Eventually, our tools will enable anyone to be part of crowdsourcing and the usage of the high-resolution scan of the entire planet, opening up endless possibilities for both enterprises and individual users,” Makinen said.

For instance, self-driving cars can finally get an accurate model of the surroundings. Buildings and cities can be designed on top of the pixel-perfect virtual environment, and gaming companies can develop experiences that take place in the real world. Because Umbra’s high-res 3D models can be embedded on any website and experienced on any device, the 3D digital copy of our earth becomes eventually accessible to all.

“We can create a high-resolution virtual copy of the entire world together. Anyone with a camera or drone can be part of creating it. As phone cameras and AI for image enhancement advance, one will soon be able to scan accurate virtual copies of the world directly from their mobile phones and explore them in 3D,” Makinen said.

If this works as planned, users won’t have to depend on Google, Apple, or others for 3D map content anymore, Umbra said.

Instead, users will soon have the ability to scan their own content whenever they want, keeping the virtual 3D copy of the world up to date. And unlike current 3D mapping platforms, Umbra does not own the data, allowing everyone to have control of their own data, creating an entirely new ecosystem around 3D content capture and distribution. On the Umbra near-term roadmap, the platform will include support for additional file formats, accurate georeferencing, and automated integration of scans into a shared digital twin of the world complete with detailed metadata.