Life is Strange 2 begins with a tragic incident that sends two brothers out on the run, fleeing their hometown in Seattle. Episode 1 debuts today from developer Dontnod Entertainment and Square Enix on the Windows PC, PlayStation 4, and Xbox One.

I’ve played through the whole episode, and these are my impressions. It is a well-told, emotion-laden story about what happens when two brothers are forced by tragic circumstances to escape from their normal life and survive on the run, with only each other to depend upon. Sadly, this game reminded me of what Telltale Games, which laid off 225 people last week, might have done when it created its storytelling games after the success of The Walking Dead in 2012.

Life is Strange 2 takes place in the same universe as the previous games. It happens about three years after the events of the original game, but it is an entirely separate story starring two young brothers, Sean and Daniel Diaz. In fact, the game asks you which final decision you made at the end of Life is Strange (2015), so that it can customize some elements in the game. And, in fact, as I moved past a sign toward the end of this episode, I saw a reference to that ending. That’s a little Easter Egg for fans.

I have not yet seen a reference to Life is Strange: Before the Storm, the prequel which came out a year ago. The two previous games are different in that the original Life is Strange involves supernatural abilities to manipulate space and time, whereas teen angst is the main focus in the prequel. In this game, the supernatural returns at the very beginning that sets the events of the brothers in motion. In previous games, characters such as Max Caulfield discover they have the ability to rewind time at any moment and re-enact choices that can have a “butterfly effect” on the world, where a small event like a butterfly flapping its wings can have a huge impact. She can also use her supernatural powers to fight off attackers, but the powers have unintended effects on the world.

In this episode, most of the attention isn’t on the supernatural powers, but the consequence that happens upon their first discovery and use. At the close of the game, you’ll be able to see whether the decisions you made match up with those of others playing the game. I’ve avoided spoilers in this review.

Brothers are a good subject and a change of pace 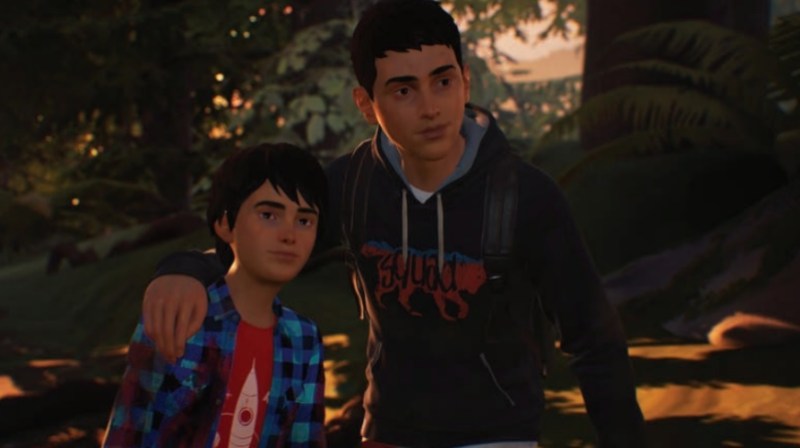 Above: Daniel (left) and Sean have to survive on the road in Life is Strange 2.

A high-school-age brother, Sean, and a nine-year-old boy, Daniel, didn’t seem like a great choice for a fan base that had so far focused on teenage high school girls or young women. The leaders of the original team — Michel Koch, Raoul Barbet, Jean-Luc Cano, Christian Divine, and others — returned to this game and decided to leave the characters of the original Life is Strange behind. They decided that the core of Life is Strange is about relatable characters, realistic settings, and real-world problems — laced with a supernatural element that makes sense in the video game medium.

The stereotype suggests that such boys wouldn’t provide the emotion necessary for a Life is Strange story. And a depiction of macho boys at play probably would have been quite odd. But under the pressure of tragedy, boys can rise to the occasion and learn how to show emotion against the macho culture programming.

When the boys realize that they only have each other, they begin to bond. Sean realizes that he is a role model, and that he will model behavior for Daniel to follow. This becomes important when the player, as Sean, has to decide whether to steal food necessary for their survival on the road. Sean is responsible for his younger brother, and the decisions you make in the game are not necessarily about a correct choice, but about making the best choice under the circumstances. If you make expedient choices, you may find — I would guess — that little Daniel will emulate them and embark on a life of crime by the end of the series. Trust is essential between the brothers, and so Sean has to decide whether to lie to Daniel or to always take the high road.

A story told in many ways 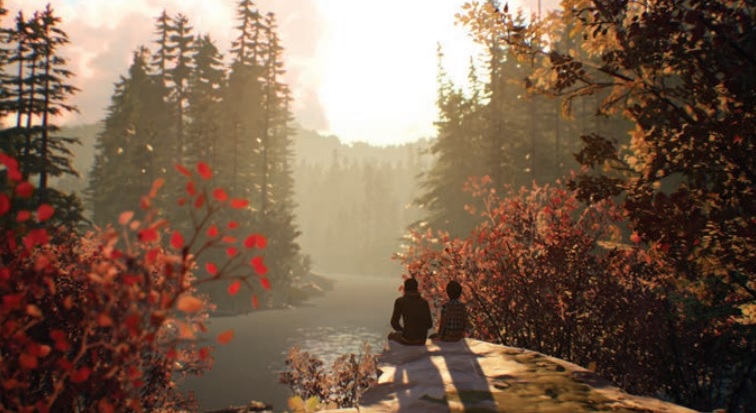 Above: Enjoying the outdoors in Life is Strange 2.

Dontnod excels in telling stories that nobody else would, about ordinary life centered around teen angst. And it does so without being an ordinary soap opera. The creators exploit the interactivity of video games and your ability to inspect your environment as you can’t in a TV show or film. You can go up to things and find out more about the main characters, the high-school age Sean and the 10-year-old Daniel, that you wouldn’t otherwise know.

When you look at a photo on the wall, you understand that the boys’ single father longs to go back to Puerto Lobos, a fictional place in Mexico where he owns property. When Sean sees an extra woman’s bike hanging in the garage and says to himself that his father should get rid of it, you know that something isn’t right when it comes to the missing mother.

At one point, the camera focuses on a bloody Halloween zombie mask left behind on the woody road, with the camera shooting the boys walking off in the distance, as if they are leaving behind the old world. The musical score from composer Jonathan Morali shines in moments like this, when the camera lingers over scenic moments. You get a certain amount of enjoyment when the downtime of beautiful scenery gives you emotional room to consider the peak moments when something terrible happens. At some point, you realize that bonding and brotherhood happens during some of these lulls.

You have to be a judge of character 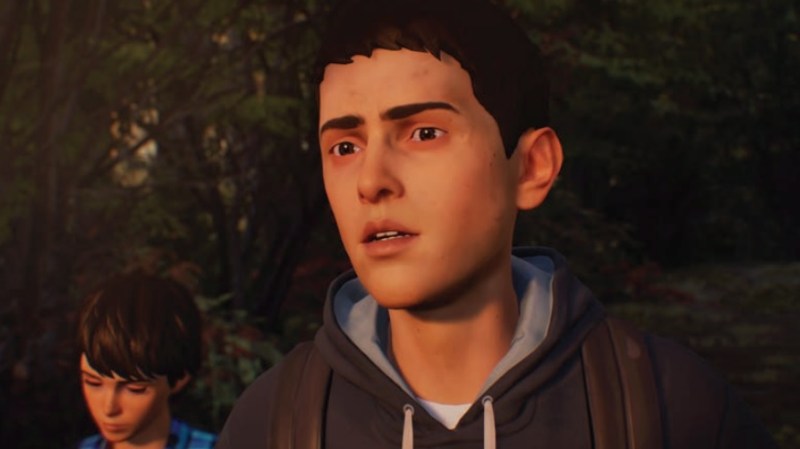 Above: Can Sean make the right choices in Life is Strange 2?

The boys are vulnerable out on the road. Sean doesn’t look old enough to make decisions as an adult, and the adults they come across look at them askance when they learn they are traveling alone. Some adults will help, and others will become more like predators. Your decisions can randomly deliver you into the hands of people who are kind or nefarious. I found that these characters were drawn carefully, so that they sometimes yield surprises. The person you thought was shady might turn out to be good. Young Daniel will likely trust everyone that he meets, and so Sean has to be more discerning.

A dip into politics and romance

This game has references to racism against Latino immigrants. One of the first people that the boys run into on the run is a racist who favors “building a wall” to keep people like the Diaz brothers out of America. This could have been clumsy and poorly handled in a way that could turn off fans. But I think it fit with the story, and so it added a new dimension to the Life is Strange subject matter. The boys embark on a long road trip from Seattle to Mexico, a kind of reverse immigration. They have to use side roads, rather than the main highways, and can run into people with all walks of life.

The game also starts out with Sean thinking about his high school romance opportunities rather than his little brother. He chats with his best friend Lyla, and they make suggestions about how he can better get together with his romantic interest, Jenn. It seems like this is where the story is going to go in the beginning, but an incident cuts all of that off, perhaps leaving it for future episodes. But this was actually a welcome part of story, as it shows that Sean has to switch his thinking from this to Daniel.

Above: Life is Strange 2 has its mundane decisions.

Life is Strange has been criticized as a “walking simulator” by people who don’t appreciate its finer points — and lack of moment-to-moment action. These moments can be dull, like when you are looking around for a wrench for your father, or you are trying to find the different items in a house that you need for a party. I didn’t enjoy these moments, but I understand that they were necessary. You find things out about the family, as I mentioned above, when wandering around the house. But you have to dig through almost everything in the house to come upon these moments. It makes you paranoid that you’ll going to miss some major part of the story because you chose not to do the dullest things in the game. Sure, the dullness is immersive. But it’s boring too.

A mixed pace for the story 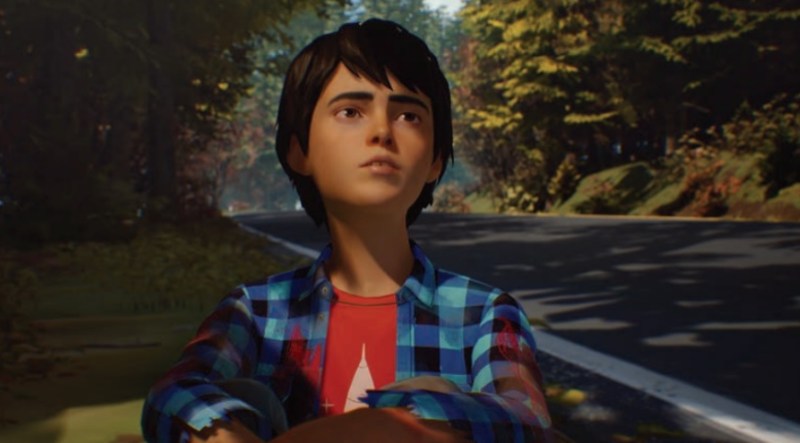 Above: Daniel can get into trouble in Life is Strange 2.

That leads to another kind of complaint, about interspersing dull moments with story elements. The game has both quiet moments and explosive ones. In contrast to other video games, it has a narrative pace wouldn’t find in a Call of Duty campaign, where the action is happening all of the time. It has valleys that give you the downtime to mentally prepare yourself for the big moments in the game. That’s good storytelling. We don’t want a game that is only 45 minutes long because it only has story peaks.

But sometimes the developers slow the pace down too much, and you have to wonder why they thought certain things were fun. Is it entertaining to skip stones, look for firewood, or decide on cookies or chips? Only insofar as they impart an interesting piece of the narrative. If they don’t, they seem like fodder for keeping you busy in a relatively short game.

Dontnod has set up characters and a story that make it seem like a natural extension of the Life is Strange universe. It has mundane situations, ordinary people, and a touch of the supernatural that make it hold your attention. The storytelling is done well, where you learn a little bit at a time about the characters, their background, and the larger context for things that are happening around them.

I like the nuances involved in making the right choices, not only for the sake of survival, but also for the survival of trust between the brothers and the survival of Daniel’s future character, based on Sean’s immediate decisions in the present. Sean admits at one point that he would suck as a parent, in a moment when he misses his father. I found there was plenty of emotion, story, and action to keep me interested in what happens next. I’m not a fan of the episodic nature of the game, as I would rather play it all at once. But I look forward to the rest of it.

Disclosure: The publisher provided us with a code to play the game on the PC.