Facebook CEO Mark Zuckerberg said in 2016 that the social network had invested $250 million in virtual reality apps and games for the Oculus Rift VR headset, and it was going to put a lot more into it. And it’s clear that at the Oculus Connect 5 event, the social network continues to pour money into VR titles.

Nate Mitchell, cofounder of Oculus VR and still an exec at Oculus, said in an interview with GamesBeat that the company continues to see the point of stoking VR to establish the market for the long run. The latest games on display at the event in San Jose, California this week are oriented toward social and multiplayer experiences, Mitchell said.

Oculus Studios is funding games such as Insomniac’s Stormland and Ready At Dawn’s Lone Echo II, while third-party publishers and developers such as Ubisoft are proceeding with games such as Space Junkies. We don’t know exactly how much money is going into these titles, but they are taking more time and resources to finish. Mitchell said it’s clear that the company still believes in VR and is ready to make it happen. 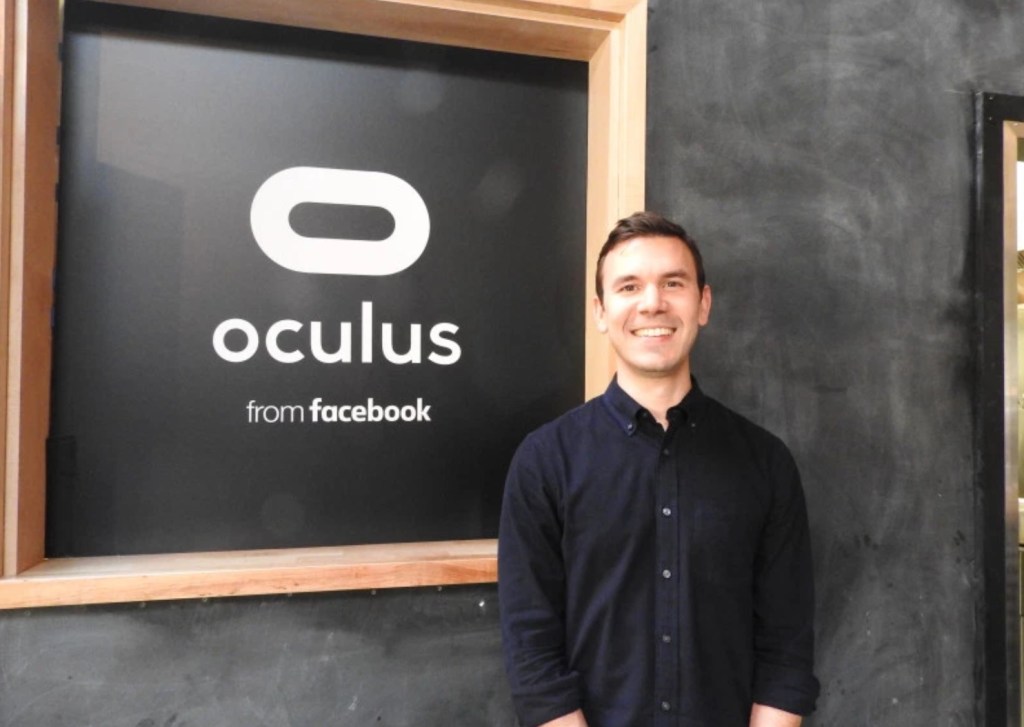 Above: Nate Mitchell, cofounder of Oculus, at an Oculus gaming preview event.

GamesBeat: These games here, what do they represent? Is this the sort of thing you’ve been greenlighting lately, or a year or two ago?

Nate Mitchell: It’s a mix of both titles from the Oculus Studios team, titles we’ve fully funded, working with partners like Insomniac or Ready at Dawn, and then also some third-party titles from the ecosystem. We have Ubisoft’s Space Junkies, which was set up over there. Now it’s Vox Machinae. That’s another awesome third-party title. Just some of the great content we’re excited to be releasing, both later this year and in 2019.

GamesBeat: It looks like these are pretty high-end games. Have they been in the works for a while?

GamesBeat: Have some of these teams, like Insomniac, already made a few games before?

Mitchell: Insomniac is on their fourth title. They did Unspoken, Feral Rites, and Edge of Nowhere. What we’re seeing is the culmination of many years of VR learnings building on top of one another. Of course, a bunch of these teams are world class studios to begin with. But they’ve been learning how to design and build for VR. Now that’s all coming together to create some of the magic you’re seeing today.

GamesBeat: Do you find that you’re more interested in greenlighting social and multiplayer games?

Mitchell: We try to have a good mix of titles. What we’re seeing is developers gravitating toward multiplayer. Multiplayer is one of those aha moments for people in VR, with what we call social presence. You’ve tried Toybox and things like that. When you’re in there with someone, that feeling of being there–it’s another level from what you can do in traditional games. 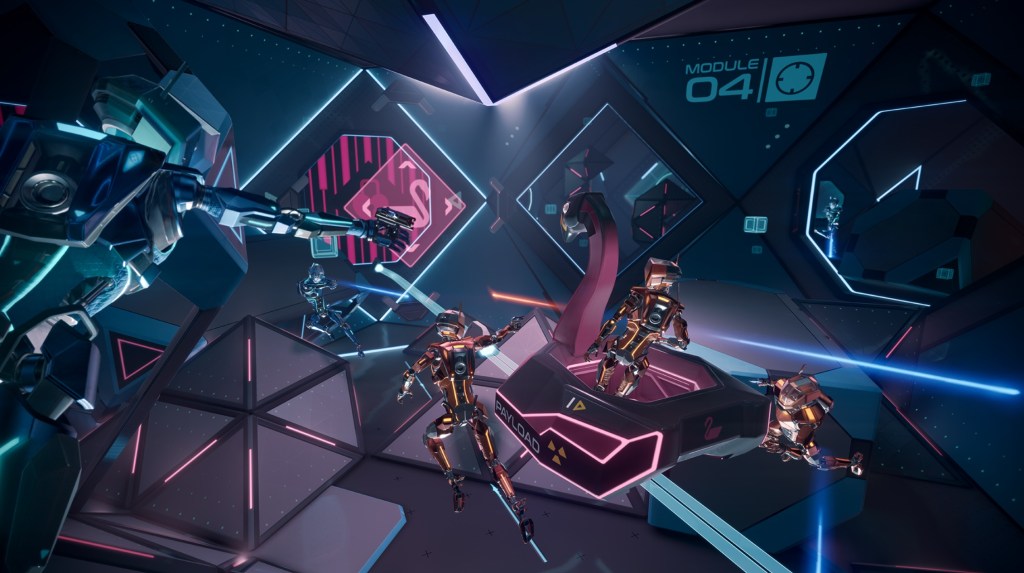 GamesBeat: How would you say these fit in with Oculus Connect 5 and some of the larger themes you’re trying to hit there?

Mitchell: One of the big themes for us with OC5 is celebrating the last five years and looking forward to the next five. A big part of that is our commitment to Rift and gaming. One of the main threads in the keynote is that we’re committed to the Rift platform. We’re just getting started. In year three the ecosystem is continuing to hit its stride. Growth is fantastic. The games and the quality of the content are at an all-time high. We’re showcasing more of this long-term investment we’re making to continue to grow VR, to support the developer community, and continue to make the Rift hardware, the Rift software experience, the Rift product as a whole better every month.

GamesBeat: I saw the Wal-Mart announcement. They’re buying into VR for training, apparently?

GamesBeat: Is that market racing ahead as well then, things like enterprise and health care?

Mitchell: We’re seeing interest in all these different verticals. Each vertical is at a different state in terms of adoption and interest, but especially in terms of training, we’re seeing VR take off in a big way. Wal-Mart is a great example. In health care I think more and more people are experimenting. How can we leverage VR for therapy? You’ve covered a lot of this stuff. You know it better than most. We’re also seeing Go be a really effective platform for those use cases. It’s easy to deploy. It’s very portable. You can take it anywhere. That’s been great. 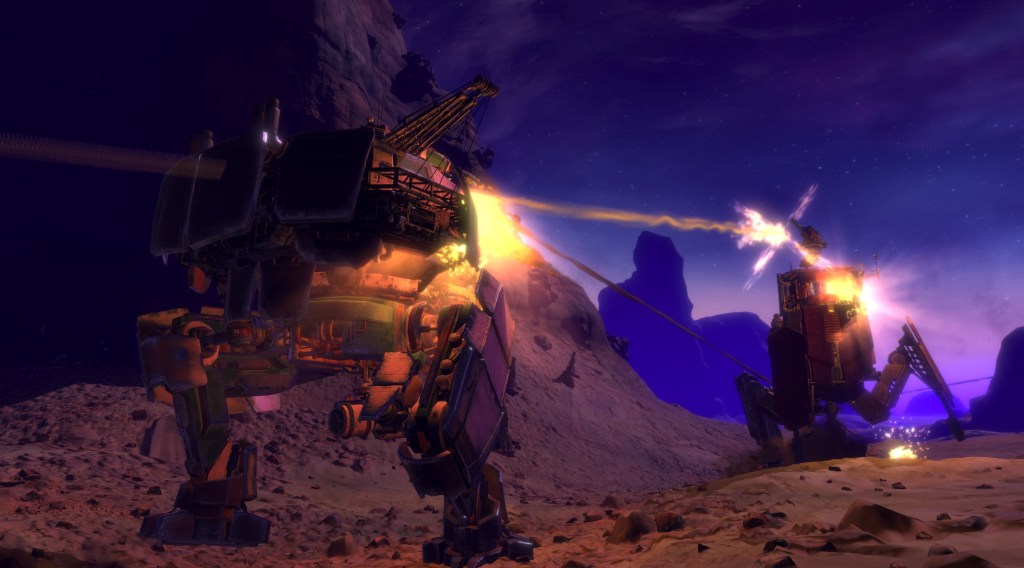 Above: Vox Machinae is heavy-duty mech combat in VR.

On the location-based entertainment side, the arcades and the very immersive experiences, we continue to believe that’s going to be a key touch point for people experiencing VR for the first time. That’s going well too. We’ve partnered with a number of those folks. We’re helping out on the hardware side and also with marketing. The Void is going to be at Oculus Connect 5 with a really fun experience. We’re trying to help everyone in the VR space succeed.

GamesBeat: Santa Cruz, are you going to demo more of that?

Mitchell: There might be a stand-alone demo or two at the show.

GamesBeat: What hopes do you have tied to stand-alone?

Mitchell: Project Santa Cruz, when we initially showed it at OC3–that’s really a feature prototype, like Crescent Bay or Crystal Cove. We haven’t announced any official plans to bring that to market yet. But we believe in the stand-alone space. You saw that with Oculus Go. I think we’ve put our best foot forward with that product. That’s just getting started. You could absolutely imagine us doing more in stand-alone. That’s all I can really say for now. [laughs]

GamesBeat: Is the distinguishing factor the hand controls?

Mitchell: Project Santa Cruz obviously differs from Go in that we have 6DOF tracking and the hand controllers, which allows for some different experiences. Most of the experiences you see here today require 6DOF input. 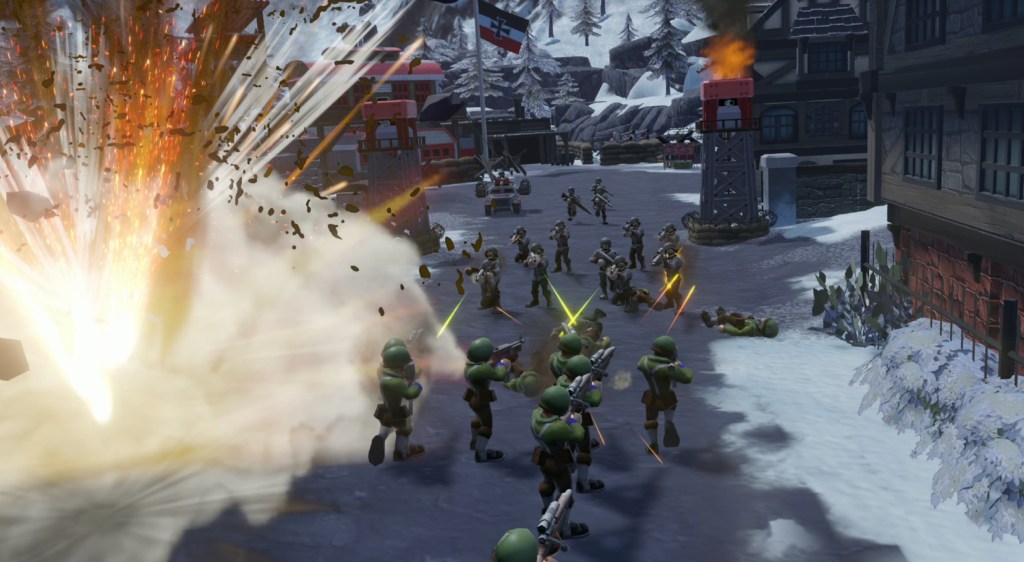 Above: Your infanty will pave the way for you in Final Assault.

GamesBeat: Do you feel like there are certain applications that are waiting for that?

Mitchell: My anecdotal impression is that people have been going full steam ahead. It doesn’t matter if they’re waiting and hungry for Project Santa Cruz. Most folks are doing whatever they want on Go, on Rift. They’re pushing forward. Maybe it’s not perfect for whatever their use case is, but they’re still pushing what’s possible. There are absolutely some developers saying, “Hey, can I get a Santa Cruz prototype?” But I don’t think that’s necessarily going to change the game in terms of use cases. Like Go, the stand-alone form factor has a lot of advantages, not least of which is portability.

GamesBeat: As far as comfort goes, we’ve got one game here that made me a little sick, Defector. I think I should have chosen the other comfort option, the teleporting one. I tried the full walking around.

Mitchell: I usually do the tunneling mode.

GamesBeat: It makes me more aware of what I can tolerate. But it seems like this is still a factor.

Mitchell: It’s still a factor, yes. I think we have a much better tool box of mitigation strategies, depending on the game. There’s a lot you can do. But we haven’t solved it 100 percent.

GamesBeat: I like how Echo Combat has handled movement.

Mitchell: It’s awesome. Lone Echo was one of the first games I played that did locomotion in that totally different way, using your arms to pull yourself through. It works for a lot of people. I’m excited for what they’re doing in Echo Combat and Lone Echo 2.

GamesBeat: What are some of the best experiences you’ve had in VR lately, out of everything you see?

Mitchell: I was playing the Stormland trailer last night for the third time. I really am excited about Stormland. What Insomniac is doing, building on not only their own success in VR, but also all their success with things like Spider-Man–what they’ll be able to bring together for Stormland is going to be special. I’m still playing a bunch of Echo Arena. I’m just a big fan of Echo Arena. Definitely excited for Echo Combat.

Recently I was playing some Rec Room. I’m a huge Rec Room fan. They’ve done an amazing job of pushing out update after update and pushing forward with user-generated content. It’s just super fun to get in there with friends and play all the different games they’ve built. I haven’t spent that much time in Spaces recently, but that team is firing on all cylinders with some cool new stuff. Hopefully we’ll be able to share more on that pretty soon.