Oculus VR chief scientist Mike Abrash has been one of Facebook’s best advocates for motivating developers to commit themselves to virtual reality. At his keynotes, he tries to inspire people to do the hard work necessary to bring about the future.

One of his big predictions is that a single product will be able to do mixed reality, or both virtual reality (where you are fully immersed in a 3D world) and augmented reality (where you can see the world around you, with animations overlaid on top of it) using the same glasses product. That’s going to take a long time to become a reality, but Abrash pointed out the paths for technology to make it happen.

Today at the Oculus Connect 5 event in San Jose, California, Abrash said that the company’s researchers have made progress on delivering cool new technology for both virtual reality and augmented reality glasses in a lightweight format. Over time, Oculus wants these technologies to converge into one off-the-shelf technology, but right now, the technologies are moving down different paths.

“The future is going to be even brighter than I predicted,” Abrash said. “We’re creating the future today.”

Abrash warned that the tech he is talking about today may or may not show up in a future product, as it all remains in the research and prototyping stage.

Previously, Abrash predicted that the optics and display would evolve to the point, in a number of years, where tech could deliver an amazing experience. In the Half Dome prototype that Facebook showed earlier this year, the tech was already racing ahead of Abrash’s targets. 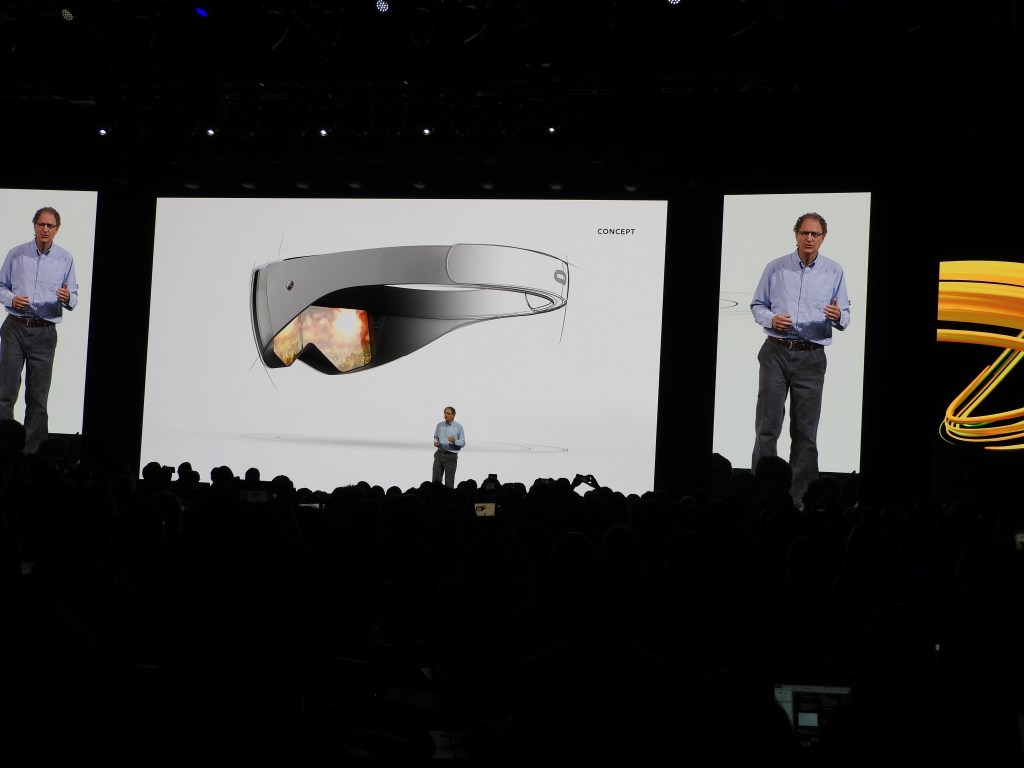 Above: A possible waveguide VR glasses prototype in the future.

The Half Dome prototype has 140-degree field of view, 4K-by-4K panel resolution, and other features that are ahead of what Abrash envisioned. He expects “waveguide” headsets to take over at some point.

Abrash said deep learning will be useful in filling in the sharp and blurry details in images with foveated rendering, where only the pixels that you’re looking at are in sharp detail and the rest are blurry. 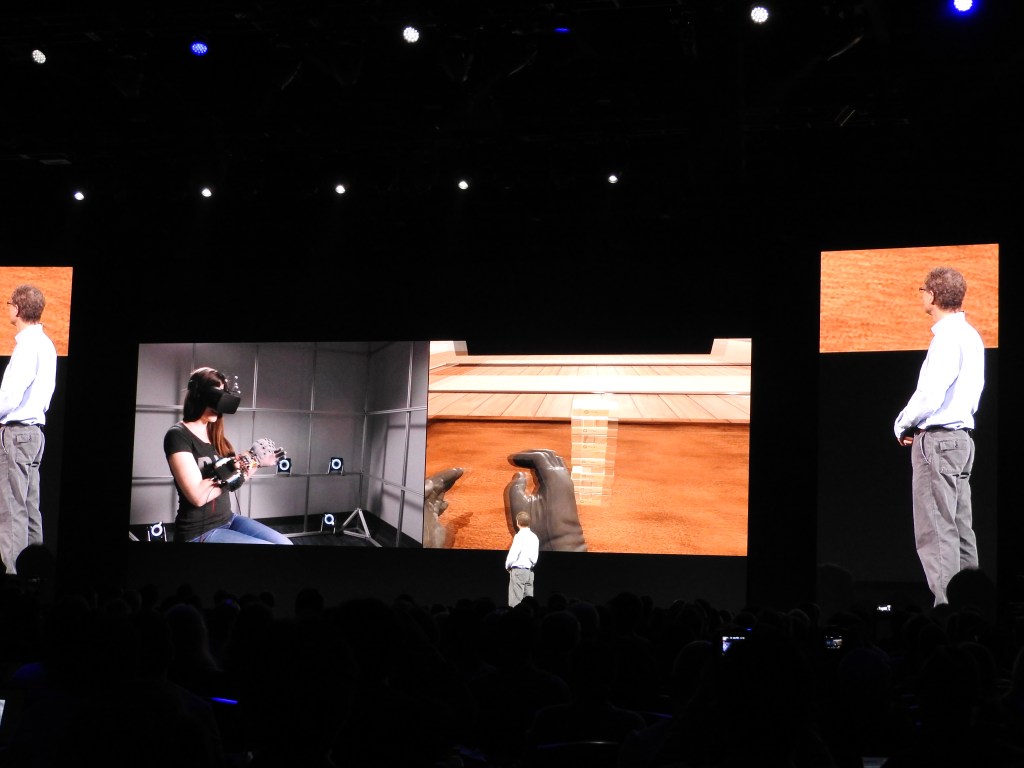 Above: Virtual reality Jenga in the future.

He also said that 3D audio are also making progress, adding to the overall experience we will have immersing ourselves in VR.

And he said touch-based controllers that recognize your finger movements could very well happen, but possibly not for more than four years. He showed a demo of someone playing Jenga and pulling out blocks with very subtle hand movements with a VR controller glove prototype.

“I believe we will have useful haptic hands in some form within 10 years,” Abrash said.

AR glasses have to weigh no more than 70 grams and dissipate 500 milliwatts of power. That’s going to be a huge challenge. Such glasses will have to mix real and virtual images, and Abrash believes this will be possible within four years, though perhaps not at the tiny dimension mentioned above. 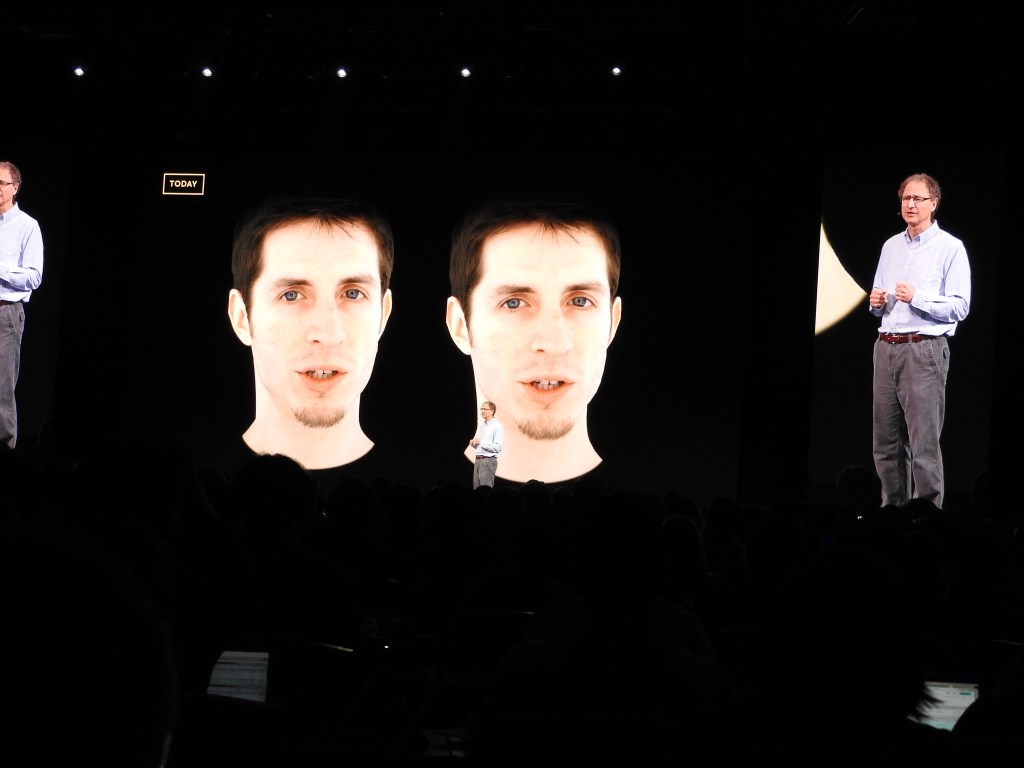 Above: The image on the right is human.

Abrash also showed off an avatar that looked astonishingly realistic, where it’s hard to tell the human from the animation. (In the image above, the human is on the right.)

“In short, as far as I can see — and I can see pretty far — the future of VR couldn’t be brighter,” Abrash concluded.