After teases and public demonstrations, Oculus is finally ready to make its third virtual reality headset — previously codenamed Project Santa Cruz — official. Renamed Oculus Quest, it was originally revealed in 2016 in early prototype form, then updated in 2017 with new controllers and demos, and began shipping to developers in November. Today, it’s been officially announced for a spring release with over 50 compatible titles including Moss, Robo Recall, and The Climb, at a price of $399 for a 64GB model.

Oculus Quest will occupy a unique middle ground between the Oculus Go and Oculus Rift headsets, which were developed to appeal to low-end and high-end VR consumers, respectively. While the standalone $200 Go requires no additional hardware and provides a highly compromised VR experience with limited graphics and controls, Rift demands a physical connection to an expensive standalone PC, yet provides much more realistic VR experiences.

Leveraging more powerful hardware than the Go, Quest is a standalone device capable of running downgraded ports of Rift-caliber apps and games. Display resolution will be 1600 by 1440 per eye, with a lens spacing adjustment and the same lenses as Go, which it claims are the best it’s ever made. While it can’t hope to mimic the power of a PC containing even a last-generation AMD or Nvidia graphics card, mobile device processors have come a long way in the past couple of years, enabling popular 3D console and PC games such as Fortnite and PlayerUnknown’s Battlegrounds to run on smartphones. 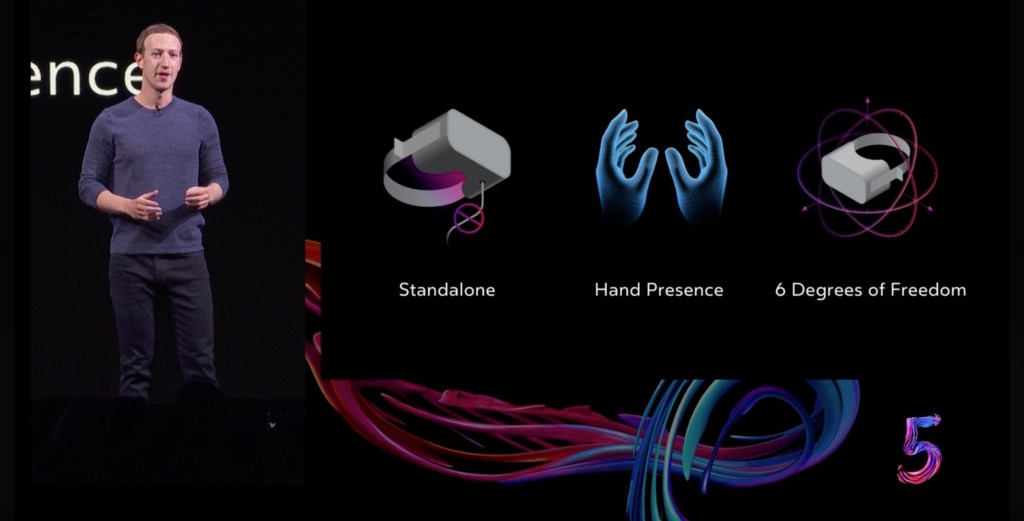 On the control side, it notably promises to step beyond Go’s three degree of freedom (DoF) tracking to six degrees of freedom, using four integrated cameras to sense a user’s walking, crouching, and leaning actions. Previously-released Rift games such as Superhot VR will come to Quest, and support the new tracking system, as will a new Star Wars story series focused on Darth Vader, starting with Vader Immortal: Episode I.

Oculus is calling the new camera and tracking system Oculus Insight, saying that it goes beyond roomscale to work at “arena-scale” — 4,000 square feet — without any external sensors. It can store room data for multiple rooms, and conceivably, the cameras might also be used to show the wearer a live view of the outside world.

Additionally, instead of a single, basic remote control, it features two Oculus Touch-style controllers with more advanced inputs optimized for VR games. The controllers use the same input mapping as prior Touch versions. Oculus is also promising improved audio over the Go, specifically more immersive sound with deeper bass. 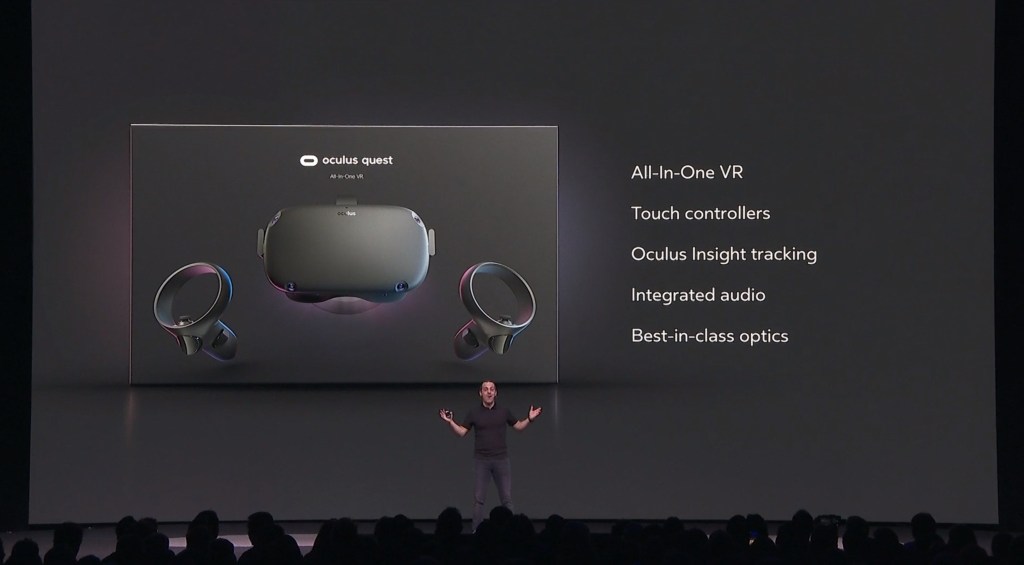 Facebook CEO Mark Zuckerberg announced the Quest’s name, release window, and price on stage at Oculus Connect 5. He suggested that Quest fulfills the company’s vision of locking in three key characteristics of VR gear going forward — wireless/standalone capabilities, hand tracking, and 6DoF tracking — though it’s unclear how the company will deal with the first characteristic in future versions of its PC Rift headset.

Oculus recently patented the device’s unique fabric wrap, which includes corner indentations for its integrated tracking hardware. Rumors have circulated since August that the Facebook-owned company would announce a first quarter 2019 release date for the hardware.