If you like the sound of clanking metal in your virtual reality games, then Vox Machinae just might be your thing.

The VR game for the Oculus Rift was very noisy when I tried it out at a recent Oculus event, and developers can check it out for themselves at the Oculus Connect 5 conference this week in San Jose, California. It’s available today on the Oculus Store for $25.

You get inside the cockpit of a robot that is seven times taller than a Tyrannosaurus rex, and then you battle other giant robots controlled by human players in a VR battlefield. 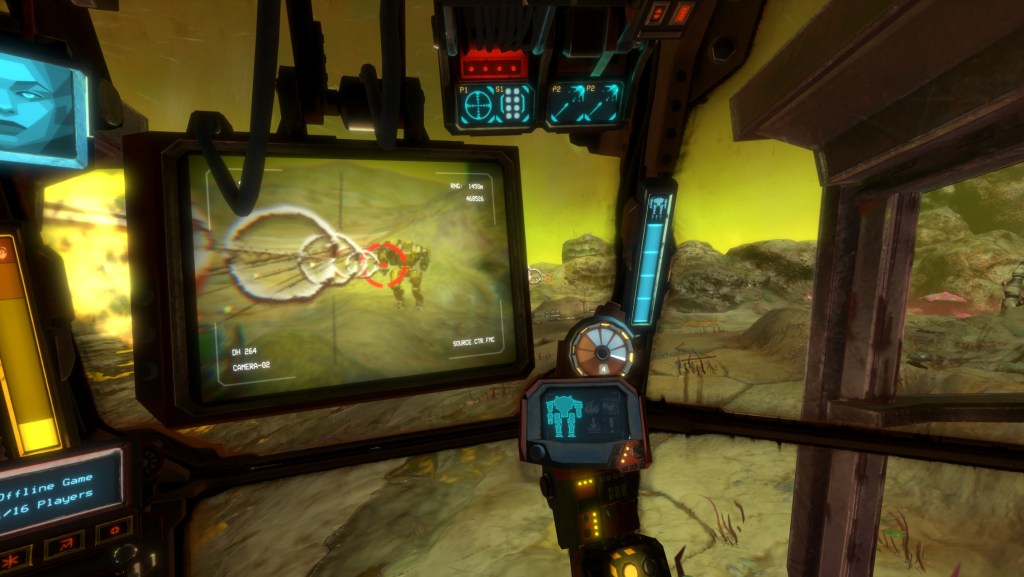 Above: Vox Machinae lets you control a giant mech from a cockpit in VR.

When I played it, I needed a short tutorial with the very mechanical controls of the game. With my Oculus Touch hand controls, I used my hand to mimic the motion of pulling a lever left or right to turn my robot. I lifted up a button to make it fly vertically, and push forward a throttle to make my robot go forward. It was rather complicated, like flying a helicopter. But it seemed immersive, like how it would work if you really had to get a giant hunk of metal moving around on a battlefield.

You can customize your rig, selecting your GDR (“Grinder”) chassis and outfitting it with a powerful arsenal of lasers, missiles, cannons, and other weapons. My mech came with a laser-cutting weapon and a bevy of guided missiles.

Vox Machinae was made over a couple of years by a very small team of a couple of developers at Space Bullet Dynamics Corporation.

I was impressed with the realism of the motion of the robots, but it was a little tough to learn. I imagine I’ll get used to it, but it was tough to control forward speed, vertical movement, and turning all at the same time you were trying to shoot other mechs with missiles or lasers.

Of course, this was complicated by the fact there were a lot of other players on the battlefield, shooting me from multiple directions. It takes a while to take down a giant robot, even with the powerful weapons I had. It reminded me a bit of the mech fighting in Titanfall. But I managed to take down a few by hiding around mountain cliffs and corners. Inevitably, though, the other mechs ganged up on me and took me down in a spectacular explosion.