The contemporary version of virtual reality has only been around for a few years, but Mike Daly is one of its veterans. As a lead designer at Insomniac Games, Daly has now helped create three of Insomniac’s four VR games.

That gives Daly a lot of knowledge about how to make VR games the right way. And with luck, that means that when VR game sales finally take off in a big way, Daly and his company will be in a leadership position to cash in. There’s no guarantee this will happen, but Daly is proud of what his teams have accomplished so far.

With Edge of Nowhere in 2016, Insomniac learned that storytelling works a lot differently in VR. People wander around a lot, and they can miss story elements that are embedded in a single spot. In the spellcasting game The Unspoken, Insomniac found that engaging closely with the community matters. Insomniac talked to players a great deal on Discord and it paid off with the players recruiting others.

With the latest game, Stormland, Insomniac is trying to create a larger sense of space in a VR game, and it is also embedding a lot of story in the space. And it is trying to make the best use of full-body avatars, so that you can do things like reach to your side to pick up a gun or load an ammo clip with your free hand. I interviewed Daly at a recent Oculus event in San Francisco, and he’s showing off Stormland this week at the Oculus 5 event in San Jose, California. 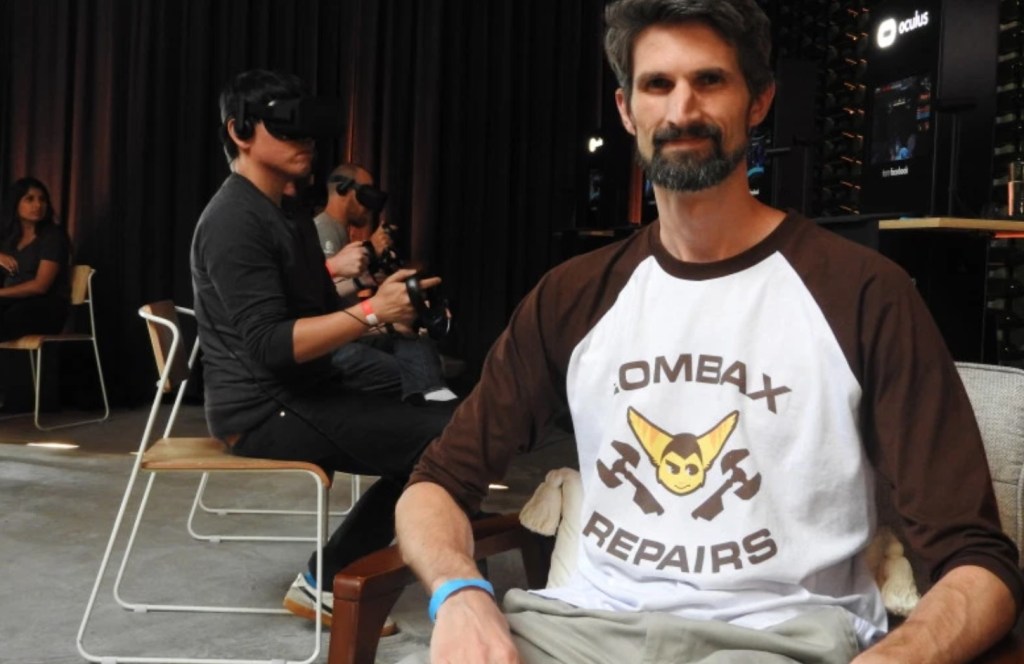 Above: Mike Daly is the lead designer of Insomniac’s next VR title, Stormland.

GamesBeat: What’s been interesting you about what you’ve learned over three games now?

Daly: Across three games, there’s a really broad palette of lessons. If I had to boil it down to one major lesson per game, it would be–in Edge of Nowhere, storytelling works a lot differently in VR. The way people focus their attention is more broad and all-encompassing. They pick up a lot more environmental detail, and so environmental storytelling becomes very powerful. But focused storytelling becomes very difficult, because often they won’t look at the character you want them to look at. When somebody’s talking and your brain has this sensory overload from the environment, it just goes in one ear and out the other.

We ended up finding a lot of ways to work around that. It’s a tough lesson about storytelling for a studio that loves to tell stories. You have to do it differently in VR. There are some strengths and some weaknesses.

In Unspoken, the two top lessons there–one, really engaging with the community is super powerful. We did a lot of playtests with the community. We were very engaged in their discussions on Discord. We released a lot of updates to the game that followed their suggestions and used their feedback. The payoff for that was really worthwhile. They carried the game for us. They brought in new players. They taught those people how to play. They evolved a metagame that kept things dynamic and interesting. They participated in events. They formed their own events. It was awesome. For a competitive game, that’s exactly what you need to have success. That’s one thing I value a lot more, having seen how Unspoken played out.

The other thing about Unspoken was that it was a Touch launch title. It’s the first time I’d worked on a game where you had that physicality of hand motion coming into play in a one-to-one direct way. What I realized was that when we asked players to do physical gestures to cast spells, their body–your body gives you that feedback, telling you that you’re casting a spell. That amplifies the experience and the immersion. It’s way different from pushing a button to activate an ability. You feel like you’re doing it. It’s a strong way of getting you involved in what’s going on in the world.

For Stormland, all three of those lessons are present. We want to tell a good story. That means being very careful about how we direct the player’s attention and what sort of sensory input we give them at any point in time. We want to make you feel like you are this android. We built a full-body avatar with moving hands and legs and everything. We ask you to perform gestures and movements that aren’t abstract, that reflect accurately what you’re doing in the world, whether that’s grabbing the front stock of your sniper rifle, throwing a grenade, or activating your abilities in your off hand and seeing that transform.

Obviously this wasn’t present in the demo, but we’re also still committed to engaging with the community, responding to their feedback, being transparent about what we’re doing. We’re designing a game that facilitates them wanting to participate in the game with each other. Giving them things to talk about. Making it an advantage to share knowledge and work together. Once you make that connection to another player, the whole game feels richer and more interesting.

GamesBeat: As far as believing in VR, the market isn’t as big as people once thought it would be by now. Some developers, like CCP, have pulled out of the market. Is there something encouraging about what you’ve seen so far that makes you want to stick with VR and keep on going?

Daly: There are a few things going on that keep me excited. For one thing, very early on–we made some early Oculus titles. Of course we would have been delighted if it was an overnight success and had massive adoption, but we didn’t count on that. Oculus was very up front. They’re invested in this industry for the long term. In the years that have followed, clearly they’ve put their money where their mouth is. They’re willing to make that investment so we don’t have to worry about the floor dropping out, which is a great security blanket to have if you’re interested in pushing this technology forward.

Another big factor going for us is that as more and more VR games come out, you can see that there’s desire for the library of VR titles available to expand in particular ways. That desire is an indication not only that there’s an opportunity to make something that will appeal to people, but also that people want more out of VR. As long as we can meet those desires, the audience is going to expand.

In fact, that was one of the real driving forces behind Stormland. We personally felt the strong urge to play a really liberating, open traversal game. We also got the sense that’s what a lot of other people wanted too, people waiting to dive into VR, the curious people on the periphery. 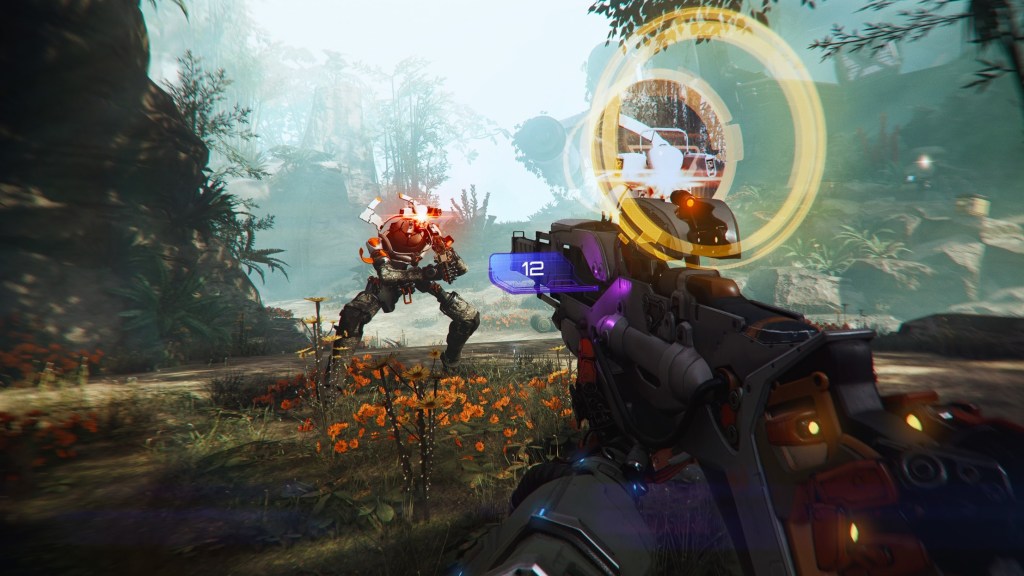 GamesBeat: Is it the part where you’re flying through the clouds, or is it something else about the game?

Daly: For us, it’s the big picture, the general idea of–you have a suite of hand-driven traversal controls that play into each other to give you the ability to reach that distant peak, to crawl into that cave, to jump over islands. It’s where you’re able to get to in the world, more than a singular mechanic. That’s what enables us to put nooks and crannies and overhangs and arches that are just fun to peek around. It’s exciting to look around and find a valuable chest in there.

Once we had that feeling — now you can move anywhere, and there’s all this stuff to find by moving around and looking around — that was a great foundation for putting this threat of combat and danger in place. Moving around has this other layer of considerations to make. There’s a meaning behind the stuff you find. On top of that, we could layer in the strategy of combat and this interesting terrain, with a variety of enemy compositions and an unpredictable player loadout. It creates a dynamic problem. How can I tackle this and go further?

At the top of the hierarchy was solving this traversal problem. From there I think we built that out into a game where traversal permeates all the mechanics, but it has all the depth you’d want out of a meaty, complete, complex game.

Stormland also has co-op. We have this full-body avatar, as I mentioned before, which helps with immersion all the time, but one of the awesome extra things about it–when you put a second player in there, and they have this fully articulated body, you can read their body language, just driven by their head and their hands. When that voice comes through the game and you can see their robotic face articulate as they talk, it works. You feel like the other person is there. It’s very engaging.