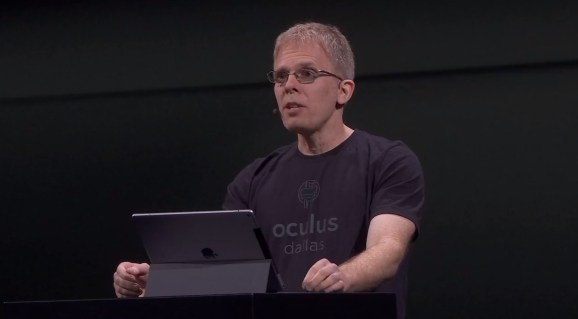 During a freewheeling day two keynote speech at Oculus Connect 5, Oculus CTO John Carmack spoke about a number of technical and design challenges the company confronted with Oculus Go, as well as new features that will come to the standalone headset platform and plans for the upcoming Oculus Quest.

The first half-hour of Carmack’s keynote was largely spent discussing his dissatisfaction with various aspects of Go — and his process of learning to live with some of them — including inconsistent UI elements across various apps that were made by different teams, developed over the past four years.

Yet he noticed that continued use of Go by owners appeared to be higher than the earlier Gear VR, which depended on a smartphone for its visuals, a situation he was still working to understand. Small tweaks to the frame rate, comfort, and features such as foveated rendering might have made a difference.

He also mentioned that the 64GB Go model has been more popular than the entry-level 32GB version, despite a higher price. While he didn’t divulge specific sales numbers, he said that the Go outperformed even his own optimistic projections.

Carmack said that the company has been working on several additional features for the current version of Go: some support for microSD cards over USB, perhaps enabling up to 64GB of external storage using the FAT32 file format, as well as a low-power mode that could extend the battery a little, and a night mode — presumably with brightness and interface changes. Thanks to work with Qualcomm, he said, Oculus recently added support for playback of certain 5K videos in H.264, with some higher-resolution video support in H.265 as well.

As the keynote continued, Carmack looked to the future of the Go platform, which Oculus said yesterday represents one of the three platforms it will be actively supporting going forward: low-end standalone VR, premium standalone VR, and cutting-edge tethered VR. The company apparently expects that software developed for today’s Go will be compatible with the next Go, with Quest and Rift having separate but similarly maintained software libraries.

Carmack said that a next-generation Go should have better battery life — either through a bigger battery or improved chipset — plus faster charging and better comfort. He also expects a future model will have more storage, internally and/or through external storage, and potentially six degree-of-freedom (6DoF) controllers if they can be done at the right price point, with limited development time. While higher-resolution displays have been discussed and even expected, he isn’t sure that they’ll make the cut for the next entry-level Go.

Specifically, Carmack said that tests have shown that some people immediately get sick when using 3DoF VR headsets, but 6DoF models tend to solve that issue — something that Quest will help, if not completely solve. The company is unsure at this stage whether 6DoF, controllers, or other factors will satisfy the next wave of VR adopters.

He said that Go launched without much of a strategy, but with an expectation of a 20-80 percent split between media viewing and gaming. The upcoming Quest will ship with a different philosophy: 80 percent gaming, 20 percent media viewing. He also opined that the Quest will wind up competing with Nintendo’s Switch for mindshare of portable gamers.

Carmack also noted that better software screening will certainly be in place for Quest: The store’s standards will be higher for the “premium” product, so he warned developers who haven’t been able to get into the Oculus Go store that they’ll have even bigger challenges for Quest. He hopes that there will be a checklist of some sort that might clarify for developers what the bare minimum might be to qualify for the Quest store.

Oculus apparently will also use Quest as an early developer-side testbed for controller-free hand tracking, though it won’t officially support the feature for users. Instead, the included second-generation Touch controllers will be the way users interact with all apps. Carmack also alluded to testing a mixed-reality mode shown in the previous day’s keynote, whereby a “cutout” in the VR could be used to show a partial see-through view of the user’s environment to see a real-world keyboard for typing or coworkers for interaction.