Dead & Buried was one of the finest multiplayer games on the Oculus Rift when it debuted in 2016. But the Wild West gunslinger shooter had limited mobility, with only two players squaring off against another two in a fairly tight arena.

But today, Facebook showed a demo of its new Oculus Quest virtual reality headset at the Oculus Connect 5 event in San Jose, California. And it showed just how much better it could make Dead & Buried, when played across a wide arena with a standalone, wireless VR headset.

The Oculus Quest will arrive as a standalone product — you won’t need to connect it to a computer to play with it — for $400 this spring. 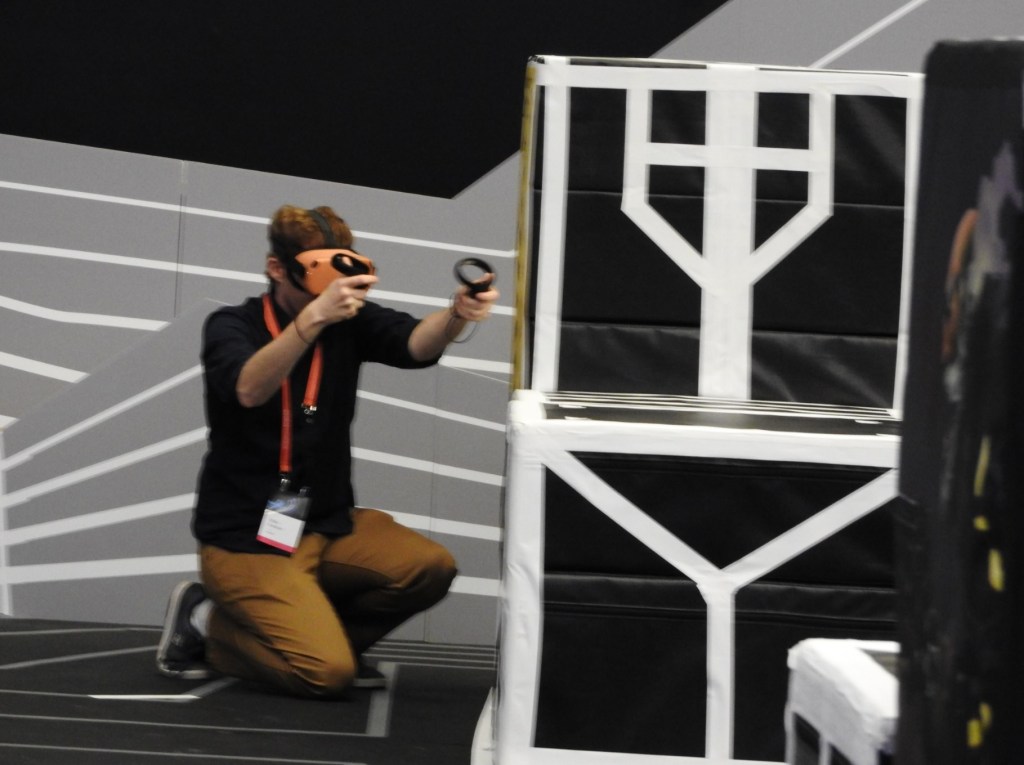 Above: A players crouches to fire in the Dead & Buried demo at Oculus Connect 5.

Just like tennis and Super Hot, Dead & Buried really shines as an experience when it is untetherd. I joined a match of three human players facing off against another three in a large space. There were big crates in the middle of the arena where we could hide for cover.

The new Guardian system sensors on the Oculus Quest headset can detect objects and walls. If you get too close to either, you’ll see it on your headset. In this kind of environment, the players could move around a lot. Oculus still had human spotters watching each person, just in case we got carried away. They warned us not to roll around on the floor or otherwise do anything really crazy.

We played against a team that was better organized than us: a team from nDreams. On our side, we didn’t know each other and had to roll with it. But I had fun just moving from cover to cover, running from crate to crate, as the enemies fired at me. I pulled my guns out from my holsters on my side, clutching them with my middle-finger squeezing a trigger on the Oculus Touch controls in each hand. I fired my six-shooter with my index finger.

We started out in the open and ran behind cover. Then we started firing. I hit some rivals early on because they weren’t behind full cover. In time, we all learned to hide behind the boxes. But if you shoot the boxes enough, they disappear, and you no longer have cover. I got killed and eliminated some enemies that way, too.

The match lasted a few minutes, and my team lost 11-10. But it was great fun, and I was winded at the end of it. It’s a lot of work engaging in physical combat on the Oculus Quest. I’m really looking forward to this kind of experience in the future, though I can see you might have to rent out a warehouse to really do this the right way. That probably makes it more appropriate for something like a VR arcade.

As with the tennis game, the best thing about the Oculus Quest was the freedom of movement. You can run and fire, and move around the arena as you like, even though you can see the physical space in front of you. The whole area is mapped well enough in VR that you can move around with confidence.