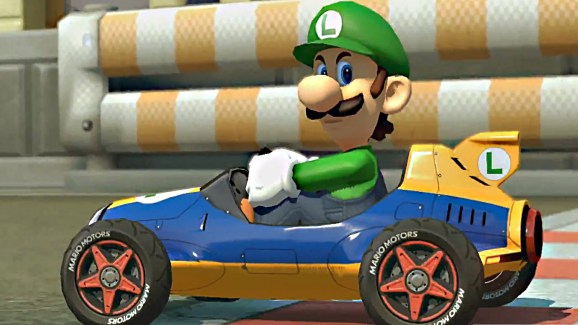 If you receive this stare in VR, you die in real life.

Mario Kart VR is coming to the United States. The virtual reality attraction is already running in Japan and the U.K., and now HTC and Bandai Namco are preparing its American debut.

This immersive VR Mario Kart experience is launching alongside the new VR Zone Portal Washington, D.C. location in Union Station. VR Zone Portal will feature a number of virtual reality games and experiences. But Mario Kart VR is the headline attraction. Mario Kart is one of the best-selling franchises of all time. And this is the first chance U.S. fans will have to go into VR with official Nintendo characters.

“Bandai Namco is thrilled to be a part of the innovative, cutting-edge project that is VR Zone Portal,” Bandai Namco U.S. sales boss Steve Ignarski said. “The launches in Japan and the U.K. brought great success, and we hope to follow suit in Washington, D.C. Mario Kart VR is a long-awaited title, and we have no doubt it will be well-received in the states, due to its incredible, immersive game-play and outstanding equipment from HTC Vive.”

Bandai Namco Amusement runs the VR Zone Portal as part of its arcade division. But it does so in partnership with HTC. That means the experiences should all run on Vive hardware, which is one of the more popular consumer headsets. Bandai Namco also built Mario Kart VR.

VR as an public attraction

VR Zone Portal is part of the growing trend toward virtual reality installations. While you can get an Oculus Rift or HTC Vive for home use, most of the biggest positive buzz surround VR at the moment has to do with its potential in theme parks.

The Void, a VR attractions company, has built its own hardware and software experiences that you can find in malls and parks around the country. It has created multiplayer, interactive adventures for Star Wars and Ghostbusters.

Bandai Namco and HTC are getting in on that action. And since Bandai Namco has the arcade license for Mario Kart, it can bring some big-name properties into its park-like locations as well.

Mario Kart VR will run in Union Station in Washington, D.C. for six months. At which point, the VR Zone Portal will wrap up and move on.