Donohue: I don’t know about different? What we’re learning from esports is about the interactivity of the broadcast. Twitch has helped us understand that this is not an audience you’re speaking to. This is a great engagement opportunity.

If you looked at our broadcast in week one and then looked at the finals, they didn’t even look like the same sport. It completely changed. A lot of that was from us, week after week, testing new things and getting immediate feedback from the Twitch chat and making adjustments. What was really interesting — for example, we changed from the NBA broadcast view to the 2K Cam, behind the point guard, from the view. That was based on feedback we got in the Twitch chat. When we made that adjustment, fans freaked out. They were so psyched that we listened to them.

Then, we doubled down. They wanted player camera views, so each individual player had their own camera on them. It all started to snowball. The fans got the feeling that we were really listening to them. While we’re excited to bring certain broadcast best practices in from the NBA, I think this idea of a totally customized broadcast is the future of consumption. We’ve learned a ton around that from esports more broadly.

GamesBeat: I know a company called Genvid has been talking about a technology to allow viewers to choose these different camera angles more easily. Maybe you could broadcast different ads to players based on what they’re watching and what you know about them. Does that sound like a logical end?

Donohue: I think it’s going to be on the continuum. I don’t know if there’s a logical end so much as we’ll just continue to iterate and make changes and be as customizable as possible. It’s not so far off that we’ll be offering the opportunity to choose who your announcer is, who your broadcast team is, what you want to see. It could be an influencer. It could be an NBA legend. It could be any number of people. Any chance we get to offer an audience something they want to hear in their own language, that benefits our engagement chances. 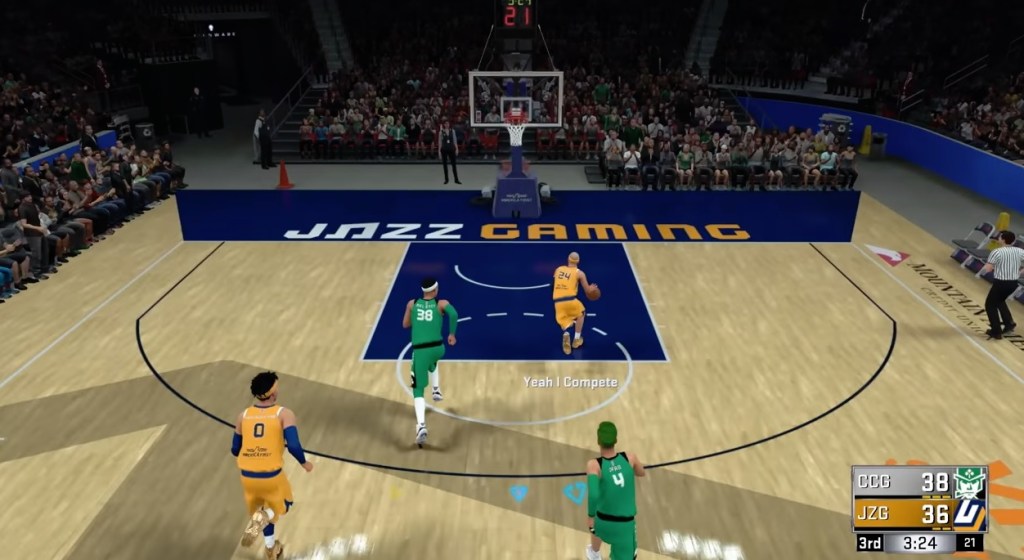 GamesBeat: What if the NBA objects to that? What if they say, “Well, we have these traditional famous broadcasters and everybody should see them?”

Donohue: The biggest benefit I have, and one of the reasons I took this role, is I have one of the most innovative bosses in the sports industry. Adam Silver is as innovative as you’re going to find. He loves the NBA 2K League. He’s been in the studio. He’s very actively following us. I benefit from having someone who gets it. I don’t have to worry about that issue.

GamesBeat: Spoont talked about how, when he was growing up, he watched games and [went] outside and [tried] to learn to shoot better. Some of the people watching this may be spectators of the esports and then go to their console and figure out how to be a better NBA 2K player. It’s a different phenomenon going on.

Donohue: It’s another branch for us. It’s important, though, for us to make clear that this is a distinct league. This is not a marketing mechanism for us to promote the NBA. This is a distinct league, and we truly believe that. It might be anecdotal, but my own son, who’s now 12 — when he was eight years old he knew who Steph Curry was, who NBA players were, from playing 2K. He wasn’t able to stay up late enough to watch games on TV, but he got his knowledge from playing the video game.

We think there’s plenty of opportunity for us to engage people who aren’t interested in basketball. And in terms of the activity level, what we loved seeing early on — whether it’s in Miami or Utah or New York, our players, they’re waking up in the morning as a team. They’re going to the gym together. They’re going to watch film for a couple of hours. They have practice. They have a very balanced day, no different from their NBA counterparts. That’s one thing we’re glad to see that the NBA teams have instilled and carried over from the traditional league.

GamesBeat: Spoont asked you a question at the very end of his session. How are you going to make money for team owners like him?

What we’re focused on right now is scale. We want to become a global league. We want teams overseas. We think this could potentially be a 45-team league. That’s our future. Our owners are focused on growth and scale, not necessarily immediate revenue.

Question: Do you think that the leagues overseas will come from teams and leagues in the traditional sport, organizations that already have some links with the NBA, or will they be esports organizations coming in to be involved with the league?

Donohue: We see a day where non-NBA owners are coming into the 2K League and buying franchises. That’s a goal. We have 13 offices around the world. We already have deep relationships in many markets, well-developed relationships we could use.

Europe is a big part of our expansion picture. Certainly, there will be opportunities for non-NBA owners to get involved in owning a franchise in the 2K League. The ownership vetting process will be open to both esports organizations and traditional sports organizations. 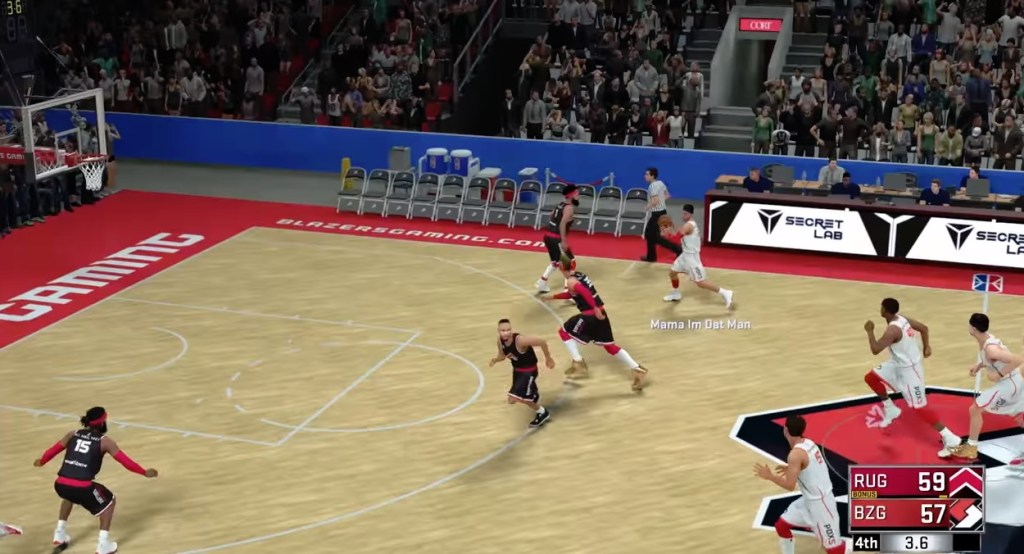 Question: What’s your perspective on short- and long-term distribution deals? Normally, NBA league rights are handled through League Pass or potentially international partners. How do you see that playing out in esports? Where will the content be distributed one year out, five years out, and further?

Donohue: Any type of long-term discussion is really tough when a league is so new. We have great relationships, obviously, with Twitch on the streaming end. I do think we have — given that we have a unique ability to attract a casual audience, linear [television] could make sense in some way, whether it’s a game of the week or some sort of magazine show. All of those things could potentially work. But our biggest thing is looking to — there’s native-language programming we could do. I truly believe we’re just scratching the surface as this point.

We have the advantage of being the NBA esport. We have a unique ability to grow in a thoughtful way. I think we’ll continue to see streaming around the world. The type of content could vary. It’s no different from who we are on the NBA side. Growing globally is going to give us plenty of distribution opportunities.

Question: Do you see content ever going behind a paywall in esports?

Donohue: Potentially? If you have VIP access to certain behind the scenes — there’s always that potential, no different from any other content. 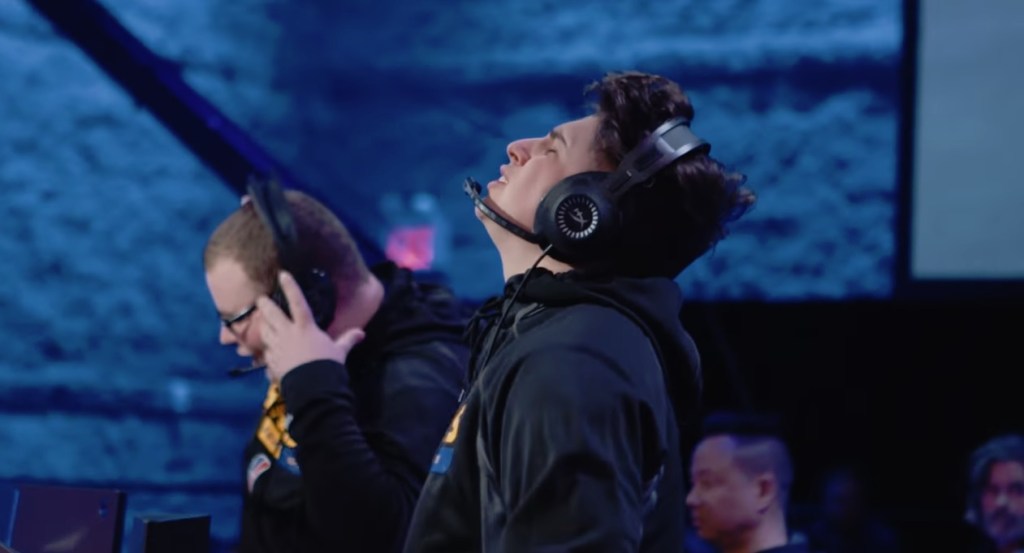 Above: The agony of defeat.

GamesBeat: Talking about going after a broader audience, especially women, the NBA has a pretty even gender spread, but esports doesn’t. How do you think you can get more women watching?

Donohue: We’ve been very focused on diversification in our player pool. We have nine international players in the league right now. We have no women right now, and that was a big disappointment for us. We didn’t know gender in the tryout process until the very end, and so, we got to the final 250, and we found we had one woman in the 250. She didn’t make it to the 102.

We immediately went into — this is where Adam is terrific. We immediately started an initiative to discover, are there any barriers to entry we need to remove? We have a task group that’s made up of executives around 2K, 2K League, and the NBA, and, in addition, we’ve developed close relationships with the top women 2K players. We’ve had a focus group with them to find out what their experience was. We think there’s an excellent opportunity for us to diversify our player pool as early as season two, and we’re very focused on that.

Disclosure: The organizers of Esports BAR Miami paid my way to the event, where I moderated a couple of sessions. Our coverage remains objective.