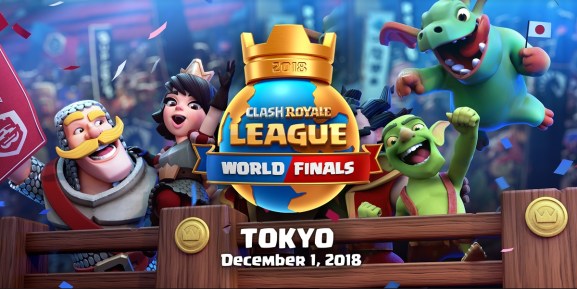 The Clash Royale League world finals are headed to Japan.

Mobile game giant Supercell said the Clash Royale League World Finals will take place on December 1 in Tokyo, where the Finnish company will give away the lion’s share of its $1 million prize pool.

The Helsinki-based Supercell hopes that mobile game esports will take off as awareness of the competitive play around Clash Royale grows. It’s a real-time multiplayer online battle arena style game, and it is a big contributor to Supercell’s annual $2 billion in revenue, and it’s a major player in a mobile gaming market that research firm Newzoo projects could crest $70 billion this year. And it’s hoping esports can help it remain a top earner.

The finals will take place at Makuhari Messe, a convention center that hosts Japan’s largest gaming and entertainment events. The full-day event will feature the final tournament for the inaugural season of Clash Royale League (CRL), where the top team from each of the League’s global regions will compete against Japan’s top team until only one is victorious, winning the Golden Crown Trophy, the title as the first-ever Clash Royale League World Champions, and more.

“The Clash Royale League is such a global competition, and after hosting the World Finals for our individual competition last year in London, we can’t wait to bring CRL World Finals to our fans on the other side of the world in Japan,” said Chris Cho, Clash Royale League commissioner, in a statement. “Japan was one of the top performing countries during this year’s CRL 20-win Challenge and has cultivated a burgeoning esports scene with both passionate top-level players and casual players. Fans around the world – whether at the live event in Tokyo or watching along from anywhere on their phones – should expect an amazing celebration of the highest level of Clash Royale gameplay.”

Fans will be able to follow the rest of the fall season on the Clash Royale Esports YouTube channel, or purchase tickets to attend the event in-person for $13.

“We feel very proud and honored to have the first-ever Clash Royale League World Finals in our home country,” said Fuchi, player on Japan’s Ponos Sports Clash Royale team, in a statement. “We’ve been seeing mobile esports grow incredibly fast here, so to have Supercell host the World Finals in Japan is very special to me. Last year I participated as a finalist in the Clash Royale Global Series in London, representing Japan, and was very upset that I couldn’t become the champion. This year my team and I are ready to stand at the World Finals, compete against the best teams in the world, and claim the title as World Champions.”

Earlier this year, 25 million players competed for a chance to participate in the inaugural year of Supercell’s Clash Royale League. Nearly 7,000 players from 113 countries advanced to the next round.

After additional online qualifying rounds and regional Combine events introducing these players to the pro teams, rosters were finalized and the competition began. The Clash Royale World finals will bring together the top team from each of the CRL’s five regions to Tokyo to play against the top team in Japan.