It doesn’t exactly come as a shock that most people — 88 percent, according to Statista — prefer booking lodging and airfare online. Going the worldwide web route affords more than a few advantages, chief among them the ability to compare prices and reviews. (Indeed, 34 percent of travelers say they research sites like Yelp and TripAdvisor before booking a hotel room.) One thing the internet can’t always account for, though, is the dearth of deals during certain times of year. And that’s where Hopper comes in.

In 2007, Frederic Lalonde, Joost Ouwerkerk, and a team of former Expedia engineers cofounded Hopper, a travel platform designed to suss out the best available airfare and hotel rates, no matter the season. Founded in Cambridge, Massachusetts, the startup went on to book more than 75 million trips for its tens of millions of users. With headquarters in Montreal, Hopper today secured one of the largest VC deals in Canada’s history: $100 million in Series D capital.

Lalonde said the funds will be used to hire engineers, customer service representatives, and data scientists, with the goal of roughly doubling the company’s headcount to 200 by the end of 2018. And it’ll fuel Hopper’s global expansion efforts, particularly in the areas of language, currency, and pricing localization. 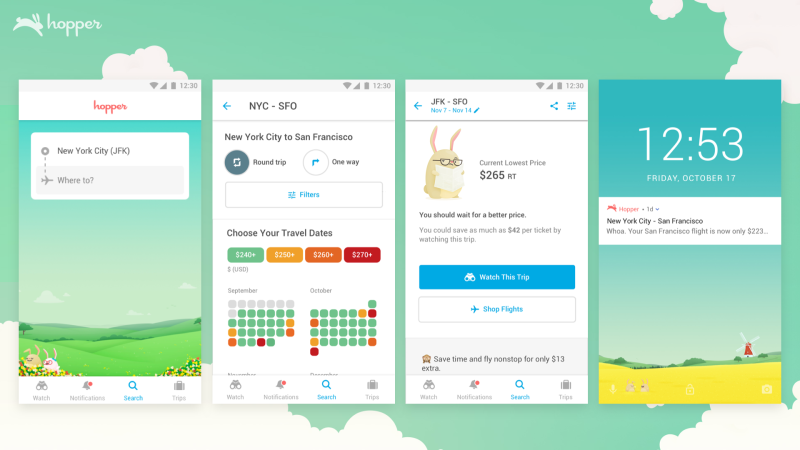 “Travel is a $1.3 trillion industry, with online taking $662 billion of that, and mobile booking valued at $264 billion,” Lalonde said. “As the world continues to shift from the web to mobile, and in-app, in particular — estimates place online mobile minutes anywhere between 70-90 percent worldwide and 92 percent of all mobile time is spent in-app — Hopper is in a unique position to become the go-to way to book travel.”

Hopper’s flight prediction app for Android and iOS taps a database of “billions” of flights to predict fares with 95 percent accuracy. The company claims that with its flight watch tool, which continuously monitors airline prices and sends price change alerts via push notification, the average customer saves about $50 a ticket.

All of this happens on the backend. Within the Hopper app, bargain hunters see a streamlined, color-coded calendar showing frugal travel days (in green) and more expensive ones (in red). Once they narrow their search with filters and settle on a timeframe, they’re greeted with plain-English predictions, such as “Prices are expected to climb at least $101 after November 18” and “Prices will vary over the next six weeks, but you likely won’t see a lower price.”

In that regard, the experience is akin to competing services from Kayak, Priceline, and Google. But few can forecast rates as far into the future as Hopper, which claims to see one year ahead.

Hopper spent six years in stealth building what it claimed at the time was the “world’s largest structured database of travel information.” Its proprietary web-crawling tech ingested blogs, photo-sharing sites, and other sources of information about locales and tagged them to a geolocation in a massive place database.

Those snippets filled out listings on Hopper’s website, over time populating them with maps, directions, flight prices, photos, related destinations, and other useful trip-planning info. And they informed its search tool, which emphasized discovery (e.g., great places for hiking, surfing, and skiing) over logistics.

After Hopper’s public debut in 2014, Lalonde and company noticed a worrisome trend: Users were reluctant to decide on a destination until they knew the flight costs. So they decided to shut down the website, relaunch on mobile, and devote their engineering resources to flight prediction.

The pivot was fortuitous.

In just three years, Hopper has managed to nab a small but meaningful slice of the roughly $800 million flight market: Airline ticket revenue last year hit $15 million, and it’s on track to surpass $1 billion in sales by the end of this year. (Hopper earns money through a 1 percent to 4 percent commission and a $5-per-ticket convenience fee.)

About a fourth of those ticket sales originated outside of the U.S., Hopper says. And growth is particularly pronounced in Europe and Australia, where sales grew 154 percent and 290 percent year over year, respectively.

“Mobile travel is growing 20 percent year over year. By continuing to innovate on mobile and, ultimately, change the way consumers plan and book travel, we believe Hopper has a tremendous opportunity globally,” said Damien Steel, managing partner at Omers Ventures. “We’re proud to continue supporting Hopper as the company further establishes itself as the leader in mobile travel booking.”