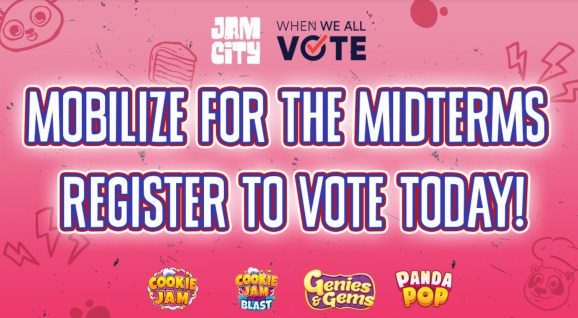 Mobile game publisher Jam City wants players to get out to vote for the U.S. midterm elections, and it’s partnering with the national, nonpartisan, not-for-profit organization When We All Vote to drive online voter registration.

From October 3 to October 5, players of Jam City’s popular mobile games, Cookie Jam, Cookie Jam Blast, Panda Pop, and Genies & Gems will see a full-screen public service announcement (PSA) that reminds them to register to vote in time for the November 6 midterm elections.

It could be a good way to reach younger voters, who aren’t as easy to reach on traditional media, and a lot of other companies are doing the same. Gamers, however, could be a unique target with a different political voice and equally hard to reach. Jam City is the first game company to team up with When We All Vote among a list of a couple of dozen supporters, including Facebook, HBO, Google, and Reddit.

With the average smartphone user spending 55 minutes per day playing mobile games, the company said they will serve the message to a vast, highly engaged audience on a platform that packs the highest impact.

“Mobile is America’s platform for work, play, expression, and information,” stated Jam City CEO Chris DeWolfe, in a statement. “With this partnership, it’s also a platform for action and involvement. Jam City has a unique opportunity to serve the millions of people that play our games each day on their mobile device by connecting them with vital voter registration resources. We’re excited to partner with this esteemed organization and ‘mobilize’ the mobile games audience to make their voice heard in the midterm elections.”

95 percent of Americans own a smartphone, relying on their devices for entertainment, information, and communication. With the ubiquity of these devices, more than 185 million Americans play mobile games.

“We want to make sure that every eligible voter casts their ballot and makes their voice heard,” says When We All Vote CEO Kyle Lierman, in a statement. “Partnering with Jam City allows us to engage with a larger audience through a medium we’ve never used before — mobile gaming. When we stay home, nothing changes. But when we all vote, we all do better.”

When We All Vote — a new national, nonpartisan, not-for-profit group that brings together citizens, institutions, and organizations — wants to spark a conversation about our rights and responsibilities of registering and voting in shaping democracy.

When We All Vote’s co-chairs are some of America’s most trusted voices, including Michelle Obama, Tom Hanks, Lin-Manuel Miranda, Janelle Monáe, Chris Paul, Faith Hill, and Tim McGraw.