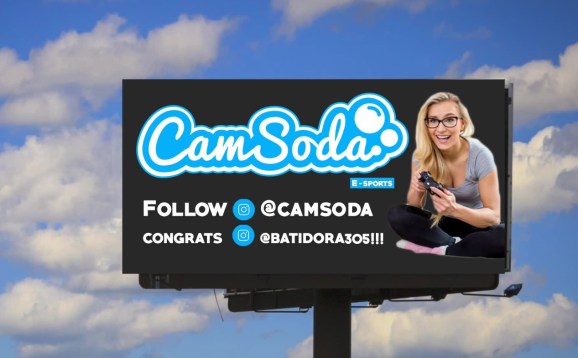 CamSoda will give up to $100,000 in sponsorship money to an esports athlete.

The New York-based CamSoda will expand into esports for the first time with a contest in which it will accept applications for its first-ever official esports sponsorship. Market researcher Newzoo expects esports revenues to hit $1.7 billion by 2020.

“Over the course of the past couple of years, the esports industry has experienced explosive growth, with projections estimating it can exceed $900 million at some point this year,” said Daryn Parker, vice president of CamSoda, in a statement. “Sponsorships have been a major contributor and, until now, have been largely driven by tech companies or gaming peripherals companies. As an adult entertainment webcam platform, with many performers who moonlight as gamers, we saw a unique opportunity to penetrate the fast-growing industry and get behind an established player with a devout following who we can help catapult to the next level. I encourage all eligible athletes to apply for our sponsorship.”

More “non-endemic sponsors and brands” are coming into esports, meaning the sponsors are shifting from “endemic” gaming brands to those that are mainstream brands trying to reach the esports audience. As an example, Mastercard recently became a global sponsor for the League of Legends Championship Series.

Applications for CamSoda’s esports sponsorship require candidates to submit an essay (200 words minimum), addressing the following question: “Why should you be CamSoda’s first ever eathlete?” Applicants can also submit an optional video clip further illustrating their response, as well as relevant information regarding their esports background, including their gamer username, level of play and social media presence (i.e. Twitch).

A panel of judges will evaluate candidates on specific criteria — including noteworthy accomplishments, as well as creativity and originality in approach — and determine a recipient by Friday, November 2. Candidates are required to be 18 years of age at the time of submission.

Upon being selected as CamSoda’s first-ever esports athlete, the winner will be guaranteed $5,000 and up to $100,000 in bonus cash. The recipient will also be featured on a billboard, which will be located in downtown Los Angeles, and receive a custom CamSoda gaming jersey to wear to tournaments and events.

The site has cams throughout a house filled with models performing or just hanging out in the outdoor pool area, showers, game room, gym etc. Dubbed the CamSoda House, it now offers the first-ever interactive virtual reality experience that allows users to broadcast live adult entertainment directly to their headsets.

He added, “Our users are heavily into esports and playing video games. If our gamers want the freedom to broadcast in outfits of their choosing and use language they are comfortable with, then we will be the home for them. We now have eSports athletes making millions of dollars a year, and we would like to support this booming industry.”