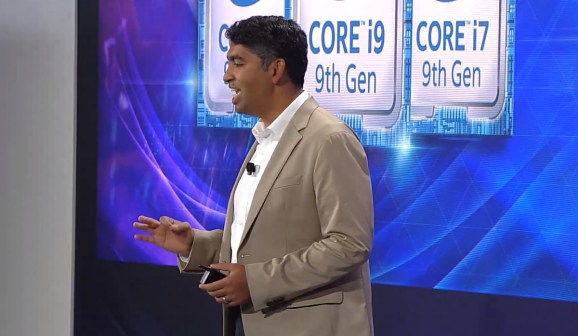 Intel confirmed earlier rumors at it unveiled its 9th Gen Core K-Series central processing unit (CPU), claiming it is the “best gaming processor in the world.”

Intel’s Anand Srivatsa, vice president and general manager in the Client Computing Group, said in a livestream that the 9th Gen K-Series chips, including the Intel Core i9 9900K, will run at 5 gigahertz when overclocked from the base speed of 3.6 gigahertz. He said the company tested the processor against the competition (Advanced Micro Devices’ Threadripper processors) and can claim, “The results are absolutely clear. It’s the best gaming processor in the world, period.”

This is a refresh of the Coffee Lake generation that brought us the i5-8400 and i7-8700K. The processor family comes with eight cores and 16 threads, with options across the i5, i7, and i9 processors.

You can preorder the processors today and they will ship on October 19. They will be available from Asus, HP, Dell/Alienware, and others.

Srivatsa showed a demo of a machine with the new chip playing and streaming two games on one processor, World of Tanks and PlayerUnknown’s Battlegrounds.

Intel unveiled the 9th Gen Intel Core processors unveiled today (i5-9600K, i7-9700K and i9-9900K) to deliver a better immersive experience for gamers, with up to 8 cores and 16 threads, up to 5.0 GHz single-core turbo frequency, and 16 MB Intel Smart Cache. The prices range from $282 to $580, while X series versions go for much higher prices.

Intel said that the 9th Gen Intel Core i9-9900K processor achieved up to 309 frames per second (FPS) on Rainbow Six: Siege; up to 224 FPS on Fortnite; up to 440 FPS on Counter-Strike: Global Offensive; and up to 221 FPS on PlayerUnknown Battlegrounds.

Correction: We changed the price range on the Core processors to reflect reality.