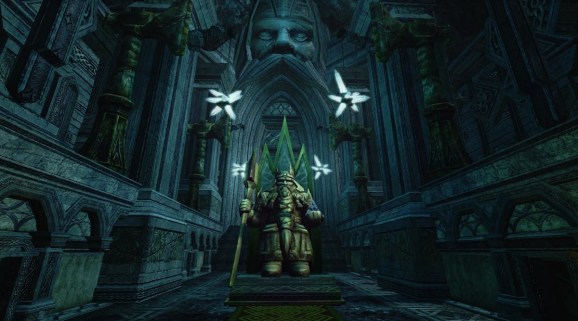 Inside Erebor, or the Lonely Mountain.

Daybreak Games and Standing Stone Games are launching a big update for Lord of the Rings Online today.

The updated is called Where Dragons Dwell, and it will enable exploration of new and expanded regions. Players can now go on adventures through iconic Middle-Earth locations including the Iron Hills, Grey Mountains, and Erebor (or The Lonely Mountain, the site of Smaug’s lair in The Hobbit).

It will also introduce the Bassoon, a musical instrument system that will let players write and play their own music in the game, while maintaining the sounds of real world musical instruments. (Update: The ability to create music has been around since 2007, but there’s a new instrument now).

Players can also get a limited time in-game gift: All players can head to the game’s store and receive a Dwarven Miner’s Helm gift using the code STARTMINING. Additionally, the Where Dragons Dwell quest pack features over 80 quests and deeds, new instances, raids, and more across new Dwarf-holds regions.