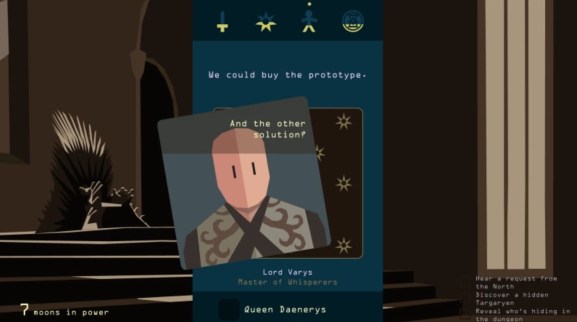 Reigns: Game of Thrones has characters that respond to your Face ID.

In the upcoming Reigns: Game of Thrones for iOS, you have to know who to trust. Should you ally yourself with Tyrion Lannister or Daenerys Targaryen? If you happen to have one of the new Apple iPhone X devices — the X, the XS, or the XS Max — you may have a better chance.

The face-tracking abilities, dubbed Face ID, can bring you deeper into the game, as characters who trust you will lock their gaze directly on your eyes, even as you tilt the device. The suspicious characters will look away from you, according to a blog post by Apple.

This matters in the game because of all of the politics, backstabbing, and secret alliances that can happen in Game of Thrones. Your actions can affect the fate of Westeros and who is on your side. Events can also occur that break canon, as it is all happening in a vision of the red sorceress, Melisandre. Your choices guide the direction of the story.

Reigns: Game of Thrones will debut October 18 on iOS and on Android and PC at unspecified times. It is an adaptation of Reigns, the award-winning card-based kingdom simulator from the indie developer Nerial and game publisher Devolver Digital. Developed in partnership with HBO, the game will sell for $4 as a paid app.