Dolby Atmos is here. It’s the 3D positional audio technology from Dolby that adds height and movement through object-based sound instead of speaker-based. And it’s giving audio companies a reason to update their product lines. That includes Vizio and its excellent home-theater-in-a-box. For around $200, you can go to a local retailer and pick up Vizio’s 5.1 wireless soundbar with two satellite speakers and a subwoofer. That’ll take you from terrible TV speakers to high-quality surround sound.

But now the company has a new version of that product. It includes Dolby Atmos and Google Assistant, and it costs $500. That’s a big price increase, but it’s a relatively low entry fee into the Atmos club. So the obvious question is how does it handle Atmos? And the answer to that is great when you can get all of your devices communicating with one another properly. But getting the soundbar, TVs, consoles, HMDI switchers, apps, and other devices to work in harmony is chore.

The Vizio 5.1.2 Home Theater with Dolby Atmos is shipping now. It has HDMI in and out with support for an audio-return channel (HDMI-ARC) as well as optical in, USB, Bluetooth, and Ethernet.

Great surround that’s easy to set up and live with

The most impressive aspect of this system is just how quickly you can add quality surround sound to any room. Vizio is well known for its soundbars, which people love because they sound nice and are easy. This home theater system isn’t much more difficult to get going. It uses a soundbar that contains the center channel, two stereo channels, and two Atmos channels. You then plug the subwoofer into the back of your room and the rear-stereo speakers connect to that. 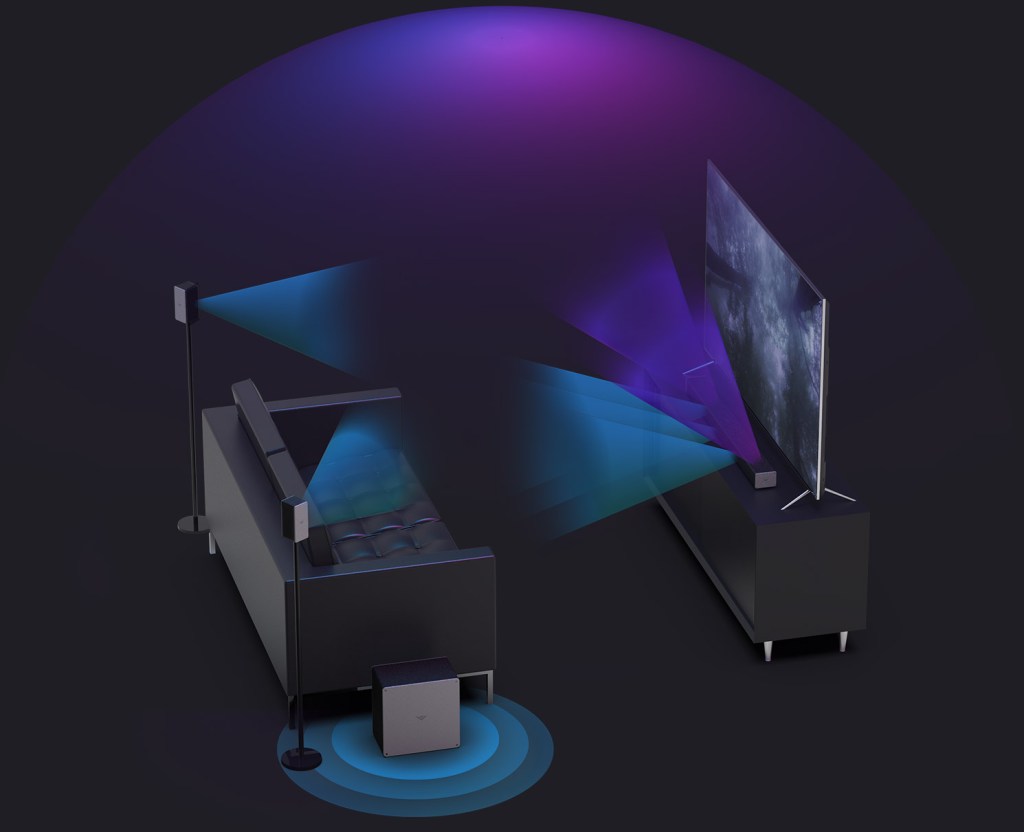 I was up and running with this system in no time. And the sound improvement is noticeable across the board. The rear speakers seem tiny, but they contribute effortlessly to the room-filling three-dimensional audio you’ll get from television, games, and film.

And the size is one of the reason the Vizio Home Theater is so easy to live with. It won’t take up a ton of space. You can easily mount the rear speakers to walls or stands. And the soundbar’s 36-inch length fits nicely under a 55-inch television.

But it’s the sound that you’ll appreciate the most. The surround audio is enveloping, but it also does well with subtlety as well. Explosions and gun fights pack an oomph that will shock you, but then you will also hear the atmosphere and room noise during quiet scenes.

If you are looking to upgrade from TV speakers or even a soundbar and a subwoofer, this is a huge improvement.

But the marquee feature is two, upward-firing Atmos speakers and support for the Dolby codec. This technology is ideal for positional audio, but it’s also supposed to bring a sense of height to soundscapes. And the Vizio soundbar succeeds with the Atmos content I threw at it.

I’m impressed with the execution considering this is Vizio’s entry-level Atmos option. The speakers fire toward the ceiling and bounce around your room, which is something we’ve seen in other Atmos soundbars. The Vizio home theater uses this to send ambient noises and movement at you from above, and it works.

Storms, flying craft, and bullets don’t just whiz by your head — they also buzz over you. That may seem like a cheap gimmick, but at its best, it is transportive.

Vizio has also upgraded its smart integrations. While past generation devices used Chromecast, the 5.1.2 Home Theater with Dolby Atmos gets full integration with Google’s smart-speaker assistant. That means you can connect it with your existing Google Home and Google Home Minis, but it can also act as a standalone one as well.

If you combine that with a smart TV, like Samsung’s Q8F, you can control the TV with your voice. You can also bring up content seamlessly by asking for it.

I especially like that you can turn the Vision soundbar into another speaker in your Google Home array. As part of a home group, it can play music simultaneously with other devices all around your home. That’s great for parties or just working around the house.

Getting devices working together is a nightmare

Consumer electronics are slicker and smarter than ever. We have powerful 4K consoles like the Xbox One X and gorgeous televisions like the LG OLEDs and Samsung’s QLEDs. Vizio has this entry-level Atmos home-theater-in-a-box with great sound that will blow you away. I should feel great about the current state of audio-video tech, but — in many ways — I’m at my lowest point with how all of this garbage works.

I was able to get the Vizio 5.1.2 Home Theater with Dolby Atmos system to work with Atmos content, but I couldn’t get it to work consistently with all of my devices all of the time. Most of this is not the soundbars fault, but it doesn’t do anything to make the process easier. The soundbar has a handful of LED lights that illuminate and blink and turn color to indicate information to the user, but you’d have to keep the manual open and next to you to translate them. It’s obtuse, and it makes troubleshooting a slog.

And I did spend a lot of time troubleshooting. I tried to play an Ultra 4K HDR Blu-ray of Star Trek (2009) on the Xbox One X, and it gave me a number of different errors. The Xbox told me that it couldn’t play the disc, and for a hot hour, it even said it no longer had a disc drive. I was able to fix that by bypassing the TV’s HDMI-ARC connection and connecting the Xbox One X directly into the soundbar. As it turns out the 2018 Samsung TV just doesn’t play nice with Vizio 5.1.2 Home Theater. That’s frustrating because it means I won’t get Atmos content over ARC, and the soundbar only has one HDMI input.

But even when I plugged the Xbox One X directly into the soundbar, I still had issues. Non-Atmos audio sounds muffled and wrong until I set it back to standard Dolby Digital. I think this is a bug with the Xbox One X, but so what? The point here is that Dolby isn’t doing the work to ensure that these devices just work.

The worst is when I just want to get the TV turned on so my family can watch something. I’ve had the soundbar stop playing any audio at all. In those cases, even rebooting everything doesn’t do anything. I had to go into the settings of the TV and/or Xbox One X to switch from bitstream audio to PCM and then back. And that seems to re-initiate the copyright-protection handshake. 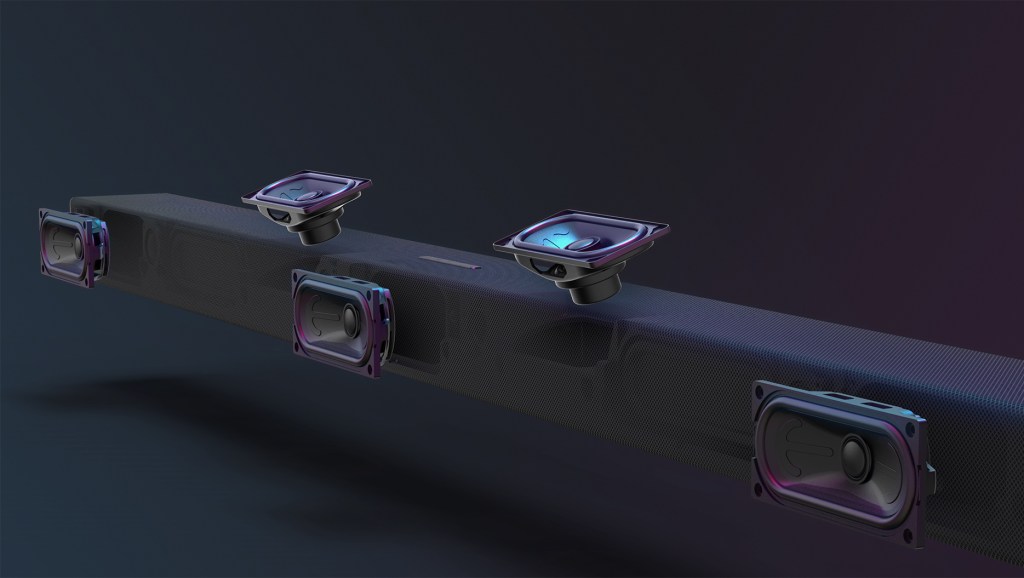 Above: Atmos is cool, but it’s also a major headache.

Atmos support in gaming is lacking

Dolby Atmos support in games is stalling. No major holiday releases feature it — at least as far as I can tell. Ubisoft included it in Assassin’s Creed: Origins last year, but it’s not in 2018’s Odyssey for some reason. Battlefield 1 had it, but EA and DICE haven’t confirmed support for it in Battlefield V yet. The next major release to previously get confirmed Atmos support is Microsoft’s Crackdown 3.

If you are buying a sound system for gaming, you don’t need Atmos. It certainly works and sounds great in content that supports it, but it publishers and developers are not doing the work to implement it at the moment.

That said, Atmos movies continue to come out on Ultra 4K Blu-ray. So perhaps you’ll have that content while you wait for gaming to get back on board.

When it comes to everything short of Atmos, Vizio’s home theater solution is a simple, plug-and-play device with great performance. The surround just works and sounds better than your typical home-theater-in-a-box solution.

Things only get frustrating when you get to Atmos content. I’m 35 years old, and I don’t have time to figure out why nothing is working the way it’s supposed to. The entire Atmos implementation feels half-baked right now.

But if you only want the soundbar for the occasional Atmos movie, and you plan to use it as a really good surround system the rest of the time, it’s great. I’m happy with it. I especially love the Google Assistant support. I can recommend it on those merits. But if you’re worried about Atmos-based headaches, however, I’d wait to see if Dolby and friends can smooth the consumer experience.

I’m not holding any of this against the Vizio soundbar specifically. It likely works much better with Vizio TVs, for example. And the truth is that even with the headaches, I wouldn’t settle for most other soundbar solutions in this price range.

The Vizio 5.1.2 Home Theater with Dolby Atmos system is available now for $500. Vizio lent a sample to GamesBeat temporarily for the purposes of this review.