The VR industry has been through quite the tempest during the past few years, and much of the rollercoaster ride of emotions and expectations has been due to what, in my opinion, have been major misunderstandings about the emerging tech’s product-market fit. And yet, despite all of these perceptual barriers and the artificial forces that have tried to compel a square peg to fit into a round hole, the industry finds itself neither in decline, nor in trouble — instead it’s thriving.

Let me share why I think all of the naysayers about the health of the VR industry are in for a rude awakening, and why the time for the deep disconnect between the market perception and market reality about VR is coming to an end.

Out of the hype cycle

Did you notice that VR quietly graduated from the famous Gartner Hype Cycle this year? The update in August met with plenty of confusion by those who pay close attention to Gartner’s celebrated landscape of new technologies that travel through the hero’s journey of initial emergence to mainstream adoption. The disappearance of VR from the hype cycle, which was previously plotted last year along the “Slope of Enlightenment”, understandably encountered some bewilderment because, well, what happened to the “Plateau of Productivity”?

I, along with some others, had the immediate reaction of thinking the team at Gartner had lost their minds and merged VR under the banner of “mixed reality”, and even demoted it back to the start of the “Trough of Disillusionment”. No, it seems, as Gartner clarified to both Italian blogger, “Skarredghost“, and German VR publication, VRODO, that according to them “the technology is rapidly approaching a much more mature stage, which moves it off the emerging technology class of innovation profiles”

One of the nagging perceptions that needs to be dispelled is the default conception of VR being wed to the consumer sector and primarily as a vehicle for next-generation gaming and entertainment. If you still think that’s the case, of course you’ll cry foul at the notion that VR is already out of the hype cycle. But Gartner’s decision has merit and weight if you consider instead the rapid iteration and evolution of the hardware in just a short spell of a handful of years and the overwhelming wave of enterprise applications that have transitioned well beyond experimental tinkering and now stands as a permanent implementation among the top tier of organizations.

From that point of view, VR’s graduation from the hype cycle makes total sense. “On the enterprise side, we are seeing VR proves its return on investment and go from pilot test to major deployments with Strivr leading the way showing impressive results for Walmart, Wendy’s and others.” Tipatat Chennavasin, general partner at The VR Fund, told VentureBeat after releasing the latest wave of their VR Landscape last month.

VR training is a best practice

Strivr has cooked up wonders in the case of Walmart, which for its part announced last month that it will be expanding its immersive training program to its array of 4,700 locations in the U.S.. That entails the distribution of 17,000 Oculus Go headsets and offering access to its 1 million associate employees. It shouldn’t be so surprising, then, that Strivr announced just last week on closing a $16-million funding round, loading up with enough rocket fuel to launch VR training into an industry best practice.

As a matter of fact, the category of education for enterprise is currently underserved, due in part to the VR industry’s lagging response time from its hype hangover to consumer entertainment. Take a close study of Capgemini’s latest report, entitled “Augmented and Virtual Reality in Operations”, and you’ll see pages awash with colorful case studies that include the likes of Ford, Airbus, BMW, illustrating how VR consistently drives up efficiency and safety levels.

The ROI for VR training in increasing efficiency, safety, and productivity across the board is so overwhelmingly apparent at this stage that sectors like the automotive industry are especially active in seeing the technology spread like wildfire to improve other areas of their business.

Nicolas Ribeyre, Head of Technology and Sectorial Watch at Laval Virtual, shared even more use cases from the recent Paris Motor Show and Mondial.TECH Paris conferences with me:

At first sight, all this activity might seem to contradict reports of investment in VR slowing down, but what we are witnessing is in fact a rebalancing of scales, whereby market validation of the technology’s critical use cases in sectors like education compels increasing investment to flow from the corporate taps. That is why you have to be wary when viewing a reduction of private sector investment in the space as a negative indicator, and instead as a signal to look to what is happening in the broader landscape.

As The VR Fund’s 2018 landscape indicates, private sector investment is now flowing in more targeted channels, namely location-based entertainment, gaming, enterprise, and healthcare, which reflects a 10 percent increase in the first half of 2018, compared to the first half of 2017. That the pace of growth is steadying on this end of the investment ecosystem only illustrates more activity on the other. As Chennavasin says, “VR is definitely spreading its wings and not slowing down.”

Aside from the mature product-market fits for enterprise, and the fact that VR arcades are now trending in western markets (and so is longer a phenomenon only in Asia), 2018 has shaped to become a very special year for the VR industry because, above all, it is only now that standalone headsets have finally arrived. Oculus Go, Vive Focus, and Lenovo Mirage are, in my mind, like VR’s holy trinity insofar as they point to the beginning of the end of those cumbersome and embarrassing tethers and cables.

Then last month at Oculus Connect 5, the Oculus Quest (previously codenamed “Project Santa Cruz”) was announced as the first generation of the affordable premium standalone that Tim Merel, founder and managing director of tech adviser Digi-Capital, has described as the “the ultimate expression of VR 1.0”, “combining Oculus Go quality graphics with inside-out tracking and Touch controllers” and giving “Facebook the most compelling version of the current state of the art.” 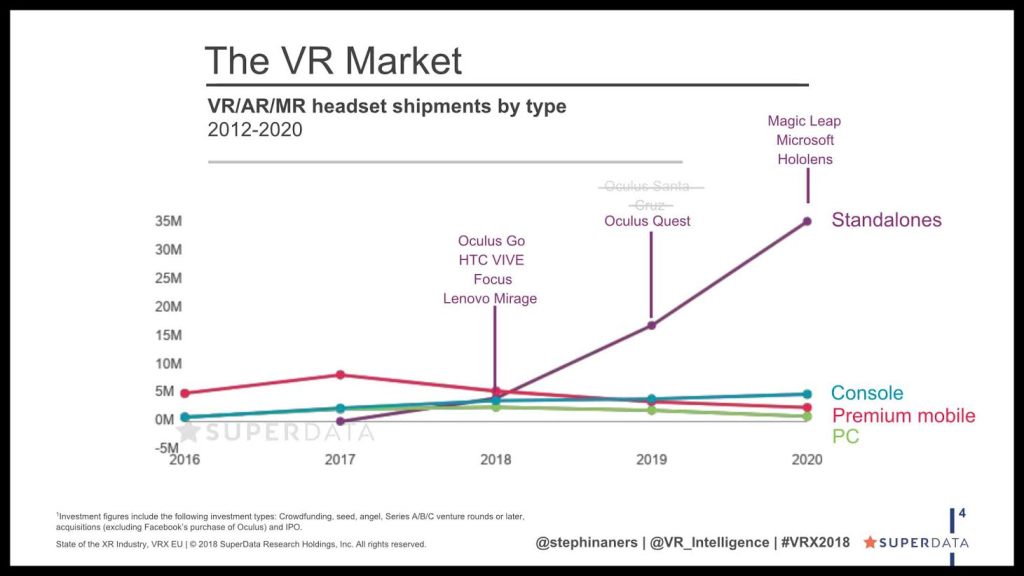 Speaking on this next wave of “true” standalone VR headsets, J.C. Kuang, an analyst at VR/AR market intelligence firm Greenlight Insights, described this year as being “a real watershed moment for the industry in that we are putting forth products with an unprecedented degree of accessibility and usability, and this invariably means a much higher addressable market. This in turn is going to go a long way towards galvanizing a new generation of developers and content creators.”

When this new breed of headsets do arrive next year, I expect them to serve as icing on the cake for what I believe is set to be the industry’s inflection point.