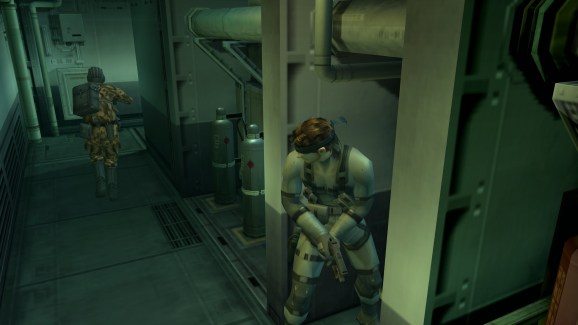 This is a lie.

Microsoft is expanding its offering of Xbox 360 games that are playable on the Xbox One today. The company revealed that its backward compatibility now supports Metal Gear Solid 2: Sons of Liberty HD and Metal Gear Solid 3: Snake Eater HD. This enables you to access the franchise’s main entries from the PlayStation 2 era on the most recent Xbox console.

Konami originally released the HD versions of Metal Gear Solid 2 and 3 on Xbox 360 in 2012. It sold the games bundled together as a collection called Metal Gear Solid HD Edition. As usual, you can use your disc copy to play the game on Xbox One, or you can purchase it digitally through the Microsoft Store.

While the addition of Metal Gear Solid 2 and 3 HD is great, the Xbox One is still missing some key entries in the series. The original 3D game, Metal Gear Solid, isn’t there. Neither is Metal Gear Solid 4: Guns of the Patriots. But you can now play 2, 3, and Peace Walker’s HD updates as well as Metal Gear Rising: Revengeance, Ground Zeroes, and The Phantom Pain.

Microsoft can’t just bring any game it wants to Xbox One backward compatibility. It has to work with publishers to get their explicit permission to do that work. And it seems like Konami has come back to the table to have those conversations with the Xbox team.

That’s notable because Konami retreated from the traditional video game space in 2015. Following a lengthy and expensive development process for Metal Gear Solid 5, the company cut ties with series creator Hideo Kojima. It also shifted most of its investment into mobile gaming and its other businesses, like gambling machines.

But Konami seems like it is slowly working back up to making games again. Or, at least, it is comfortable capitalizing on its history. The company recently announced Castlevania Requiem, a bundle of two games that is coming exclusively to PlayStation 4. That includes the excellent Castlevania: Rondo of Blood.

The publisher also had an impressive success with Bomberman R as a Nintendo Switch launch game. It even spent months following that debut patching and improving the quality of that multiplayer party game.

So if you’re a fan of Konami’s past output, it’s OK to have some hope for its future. Kojima will probably never return to Metal Gear (… probably), but if the publisher’s current, small bets pay off, maybe it’ll make bigger ones in the future.