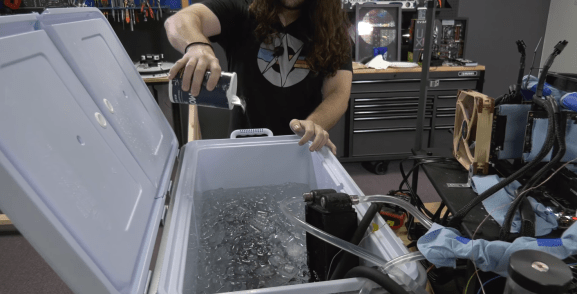 Steve Burke of Gamers Nexus uses salt to lower the temperature of his ice-bucket cooler.

Over the last year, YouTube stars have used “beef” as a way to promote their personal brands. Jake and Logan Paul appropriated this idea from the rap scene, and they sanitized and monetized it because everything is awful and dumb. But while Jake was busy pretending to defend the honor of his girlfriend so he could make money, PC hardware enthusiasts were creating the actual best YouTube beef of the year.

Last month, Nvidia launched its new RTX graphics cards (read my review). The $1,200 RTX 2080 Ti and the $800 RTX 2080 are powerful and support new, untested features like ray tracing. The 2080 Ti is particularly exciting because it is the fastest consumer graphics card ever made. But what if it could go faster? What if you could use the power of water, ice, and love to make it go faster than any other consumer PC ever? Well, that is the battle some of the top PC hardware channels on YouTube are in the middle of fighting.

Competitive benchmarking is a strange beast. This is a hobby where PC builders use benchmarking tools like 3DMark’s Time Spy Extreme to measure their rigs against one another. On its website, 3DMark maintains a leaderboard for the top submitted scores of all time. And this has led to situations where people try to modify their hardware to squeeze every last ounce of power and speed.

Hardware enthusiasts have fought over these leaderboards for a long time, but it’s different this time. The RTX 2080 Ti has launched into a world where the hardcore PC community YouTubers are collaborating more than ever. And that has led to them all publicly beefing over the Time Spy Extreme top 10, and they’ve also documented and published much of the process.

The reason this is interesting is because everyone is using the same hardware. You need Intel’s $1,900 Extreme Edition Core i9-7980XE which has 18 cores and 36 threads. You also need one or two Nvidia RTX 2080 Ti GPUs. And then you need to overclock those components and your memory to get the best performance possible. And that’s where the madness begins.

The wild rigs of overclocking

The overclocking battle started a few weeks ago between YouTube channels JayzTwoCents, Gamers Nexus, and Paul’s Hardware. They quickly set new world records in the two-GPU category. And that drew the attention of other popular tech creators like Der8auer and Linus Tech Tips.

Each channel recorded what they did, and those videos all have one thing in common: They’re completely absurd.

Paul’s Hardware, for example, has a video documenting his attempts to delid his 7980XE. That’s a process where you remove the protective shell and thermal paste on Intel’s $1,900 CPU. You then replace that paste with potentially damaging liquid metal.

But delidding is a relatively rote strategy for competitive overclocking. If you want something more extreme, how about JayzTwoCents’s setup. He set up an air conditioner that vents all of its cold air directly into a cardboard PC enclosure. And yes, it looks as dumb as it sounds: 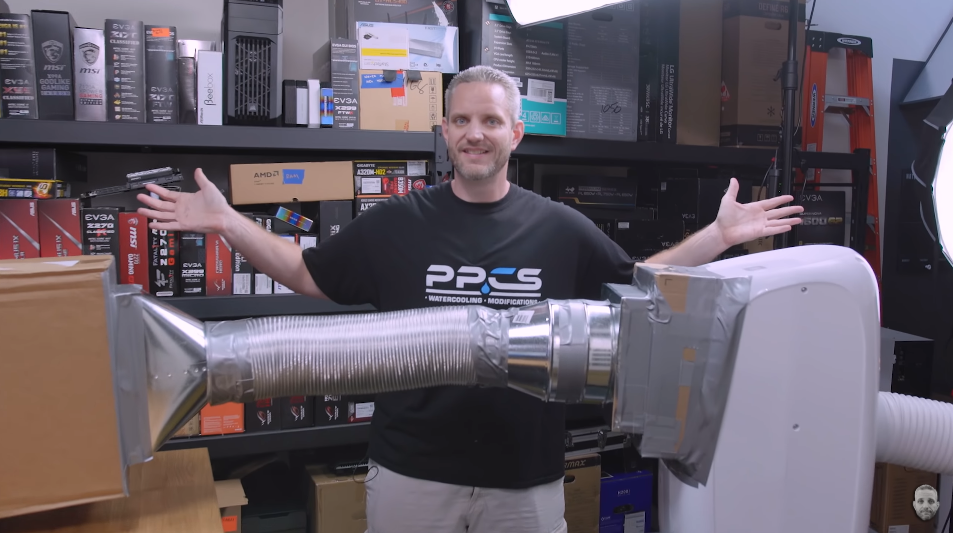 Above: What’s colder than cold?

But if you think that’s dumb — oh, it’s about to get even dumber.

Gamers Nexus editor-in-chief Steve Burke didn’t use an air conditioner. Instead, he filled a 50-gallon ice chest with salt, water, and ice. He then dunked massive radiators for his CPU and GPU into that tank. It is the height of impractical, and it’s incredible to see in action.

Jay and Burke were able to take the top spots until Der8auer came along. For the two-GPU setup (the max that 2080 Ti supports at the moment), these battlers have pushed each other to new extremes. And they made it entertaining along the way.

Why is this so much fun to watch?

None of these guys are going to use these hyper-overclocked setups for their daily computing needs. This isn’t about speeding up a PC so you can get faster render times for your YouTube videos. All of this is purely about having a bigger number than the other person you’re overclocking against.

And that’s what makes this so entertaining. You’re seeing people with the time, means, and understanding push exciting new PC hardware to the limit. The videos they create of the process truly seem like mad science. Nothing is a better example of that than Der8auer pulling a tank of liquid nitrogen off the shelf to pull 1,000 points ahead of GamersNexus second-place score on Time Spy Extreme.

Or watching Linus of Linus Tech Tips struggle for days to get his overclocked single-GPU setup working.

Television has plenty of shows where competent people do extreme builds for cars or homes or whatever. And these YouTube videos are in a similar genre.

But I think this beef works for another, deeper reason: It’s a refreshing departure from what we’re used to.

No one involved in this overclocking battle is taking it too seriously. And they all admit that they are friends who get along and regularly collaborate with one another even though their channels are ostensibly competitors.

“This is a friendly beef,” Jay said in his first 2080 Ti overclocking video. “We are friends. This is all in good fun. We all know the real overclockers are coming … so we’re enjoying this while we can.”

It’s nice to hear and see that on YouTube, where people like the Paul brothers try to play up their beef as something serious. Yes, these PC hardware channels know that a faux feud should benefit all of them, but they’re not cynical about it.

But this content also stands in opposition to a lot of the coverage of PC hardware. It feels like creators working in that space have to jump from one controversy or outrage to the next. Intel paid Pricipled Technologies for shoddy testing to market its latest CPU? Well, YouTube is great place to find 20 videos telling you why that should make you angry. And I get why we need to cover that. I did. But it’s also exhausting. And that’s where the RTX overclocking beef comes in as an excellent palette cleanser.

It’s a lot easier to watch Gamers Nexus show up unannounced at Principled Technologies to question them about that Intel testing when you also get to see people being enthusiastic about hardware. It breaks up the monotony of outrage in a way that I find really appealing, and I think these beef battles could continue to benefit the PC-hardware content creators on YouTube in the future as well.