Nintendo’s latest mobile release is bringing in the bucks. While it is successful, it is not the publisher’s best launch on the platform. The fantasy role-playing adventure Dragalia Lost has generated $16 million in revenue in its first two weeks . Because of that, it is one of the top grossing games on iOS as of October 11. That’s according to estimates from app-intelligence firm Sensor Tower.

Dragalia Lost debuted September 27. It has players guiding a party of adventurers who can eventually turn into dragons. Players can spend money on chances to get better characters and dragons. So it is similar to many of the most popular Japanese mobile hits. That includes Granblue Fantasy. Dragalia Lost developer Cygames also made that.

Dragalia Lost is Nintendo’s first original property to debut on mobile. The publisher has brought some of its existing characters and franchises to smartphones and tablets. Animal Crossing: Pocket Camp debuted last year, Super Mario Run launched in 2016, and Fire Emblem Heroes came out in between. Dragalia Lost’s $13.5 million in the U.S. and Japan helped it outperform the first two weeks for Animal Crossing. But both Super Mario Run and Fire Emblem Heroes had stronger starts. 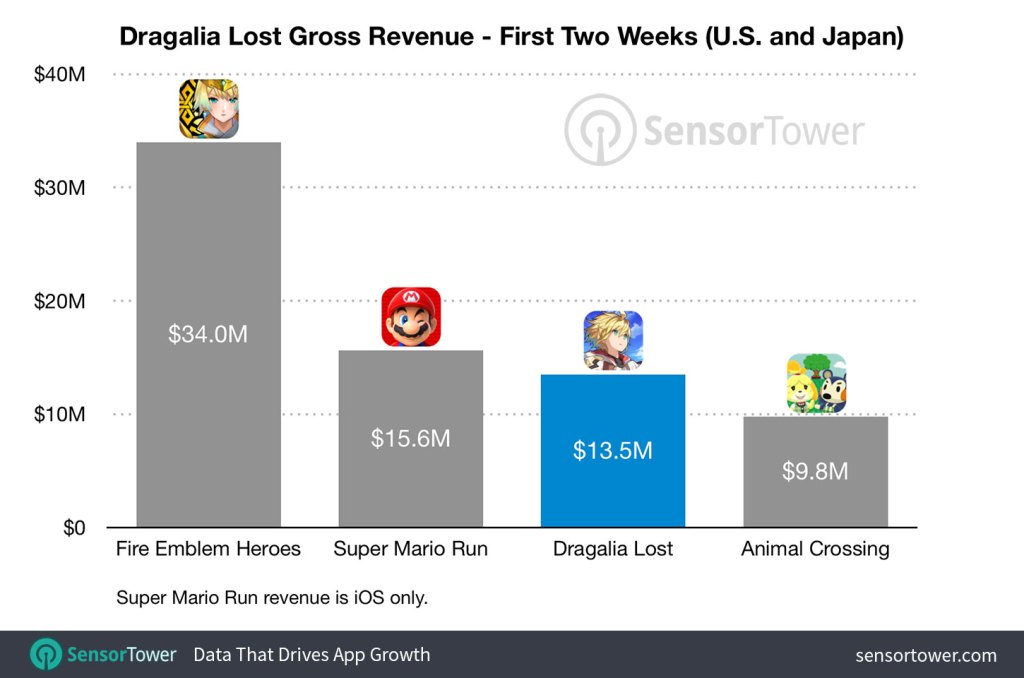 Considering Dragalia Lost is not working with familiar characters, that is an impressive two-week hull. In contrast, Super Mario Run was the first mobile game featuring the Italian plumber. Also, Fire Emblem Heroes relied on characters from the popular 3DS and GameCube games. Due to the solid start, Nintendo and Cygames have something to build on.

Nintendo built Dragalia Lost with the goal of establishing a mobile hit in Japan. And by that metric, it is definitely succeeding. Sensor Tower points out that 69 percent of its total revenue has come from Japanese players. The second largest market is the United States with just 16 percent of the total. Hong Kong, Taiwan, and Macau are the next largest markets.