GamesBeat: What kind of fiction is going on behind IX, the story there?

Blundell: All I can give you is what we’ve shown so far, because part of that quest is for the community to work out. But when we join IX, the gang are going into a cave at some unknown location. They hear a mysterious voice saying, “For the answers that you seek, you need to breathe the vapors.” They breathe the vapors, and then they appear in that coliseum, that gory gladiatorial coliseum.

GamesBeat: Is the Zombies audience used to having what you might call ridiculous situations? Gladiators in Rome and zombies and machineguns?

Blundell: [laughs] Here’s the thing. When you talk about the Zombies community — if you already have a community that’s okay with the dead coming back to life, we’re starting out in a realm of fantasy. From that point we can go a lot further, absolutely. Not only are they used to it, they demand it.

The difference is that with the Aether story, we’ve jumped across time and space and multiple dimensions and so forth. The Chaos story is a bit more traditional, if you will, in terms of — there is a linear path along there. They go and visit, visually, places in the past. But the world history is preserved. Our understanding of world history, the Chaos story still works with that. All the situations they end up in, there’s no one with video cameras. Not many people are walking away from the Titanic telling the story. Our understanding of history can be preserved.

Blundell: It’s interesting. When we started Black Ops IV — if you look at the trajectory of the games we’ve been making, we’ve been heading toward a more social game with every iteration. Zombies has been increasing in popularity and the number of people playing it. Obviously it’s very heavily co-op. When we were making traditional campaigns, we were adding more co-op, and multiplayer of course is social by its very nature.

My lead writer, Craig Houston, I asked him to print out all the scripts for Zombies. I’ve been executive producer on every Black Ops campaign. That stack of scripts stands several times higher than any script for any campaign we’ve ever produced, in terms of storytelling. On top of that you have combat missions. The specialists are the focus for our multiplayer and Blackout as well, and combat missions give you even more story for each of the characters.

Even though we don’t have a traditional campaign, I think we’re doing more storytelling here than we have in the past. I see that as a badge of honor. Not only do we have the storytelling of our world and our characters, we now have three modes where emergent storytelling is you speaking to your friend over the water cooler and saying, “This is what happened last night. This is what I did and what happened after.” It’s the combination of those ideas – the traditional story element and then your story coming together – that we’ve been interested in and continue to be interested in.

Above: Call of Duty: Black Ops 4 Zombies will let you use modern guns on the Titanic.

GamesBeat: Do you have any worry that with Zombies, people might never finish the story?

Blundell: Yeah, yeah. It’s a badge of honor for some people. As the game industry has become more and more hand-holdy in terms of — I can say this as a campaign guy. As we became more and more hand-holdy — you know, if you stop playing by level three you miss out on the other 10 levels of content we made for you. A lot of people don’t go all the way through to the end of a campaign.

Zombies became this thing where to have played deeper became a badge of honor. Knowing what’s going on — the Aether story, 10 years worth of that, is mind-bogglingly complicated. People love it for that. But it’s also an opportunity in Black Ops IV to start the new Chaos story, start at a base level, and get more people in. People would say, “I love this Zombies thing, but lord knows what it’s talking about now.” The Chaos story is going to start off nice and slow. Everyone can get on the ride at the beginning and get going again.

GamesBeat: What do you think you’re most proud of, now that this Zombies is nearly finished?

Blundell: I have to be honest. It’s tough, because I’m really happy with every single element. I know that’s a cop-out, but I’m happy with our new Chaos story. I’m excited about that. We’ve had some great ideas over the years, and to be able to start a new story and put those into it makes me very happy.

I’m also very happy about the mechanical level. Because of the success of Zombies up to this point, we have a bigger team. We’ve been able to expand it more, give all those personalization features and customizable features. That’s only possible when you have enough staff to do that kind of stuff. That’s worked out well.

I think our visuals — we’re getting to a point now where, when we do the Titanic, I love this thing. I love just wandering around the ship without the zombies. Our sound design has always been very strong, and once again they’ve knocked it out of the park. As a director my job is essentially — I need to be happy with everything we’re doing, and I am.

Let me try and push myself a bit and narrow down. I’d say the thing I’m most happy with is our new cast. Every time you start a new cast, you run a risk. It’s that actor’s syndrome. “Will they love me?” I’m really happy with how all the new characters are working together as an ensemble. I think people are going to be in for a fun time. 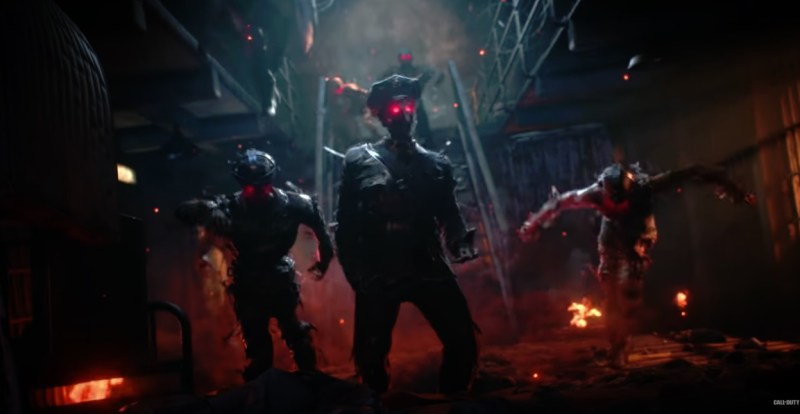 GamesBeat: We had a fun little story in our game. Three of us were down, and the one guy left figured out a way to run around the deck in a sort of oval loop. The zombies just chased him and chased him, and eventually he managed to shoot the last of them and revive us all.

Blundell: There are certain things where people say, “Well, if we wanted to kill you off we could.” But you get stuff like that where — that could work, but on higher rounds, it won’t work. You can’t use the same tactics forever. I saw some guys doing the whole front of the ship to the back, and they’re like, “We’ve got it! We’ve gamed it out!” But only for a certain amount of rounds. There’s a ceiling to different techniques. I love seeing people play it and think there’s a way to game it. That’s part of the fun, that kind of naughty kid in school mentality.

We have a couple of the developers here with us, and it was really fun to listen to you guys, hear all the talk. That’s what we live for, seeing people enjoy themselves and have fun. Hopefully when we release, everyone will be enjoying it.

GamesBeat: How quickly do you think people are going to get to max level?

Blundell: Well, round 1024 — I don’t know. Every time I’ve made a prediction like that I’ve been wrong, so I won’t say anything. It’s like when they always ask me about the Easter eggs. “How many days until they find all the Easter eggs?” I’ve lost money on all those bets. I’m just not going to say. But I think by giving them four maps this time, we have a greater chance of going a bit longer. It’ll all get split up.

GamesBeat: Which was the classic map that everyone wanted back?

Blundell: Classified? This is where it all gets a bit mind-bending. The first cast that we introduced in Zombies is called the Ultimis cast. They’re very slapstick, very fourth-wall-breaking characters. That’s Classified. Blood of the Dead is the Primus crew, which is the same cast, but a different version of them that’s more stern, a bit more story-heavy. And then you have the new Chaos cast, and so the only cast we’ve not got in there that we’ve had in the Zombies storyline before that point is the Ultimis cast. I would say, watch this space.