Magic Leap did not mention during its coming-out party in Los Angeles this week that it has raised $2.4 billion in funding since 2011. That’s because that fact might prompt people to hold the company to a higher standard for the revelation of its technology and applications for mixed reality, or the blending of animated digital information with the physical world.

Rony Abovitz, CEO and founder of the Florida company, has correctly identified spatial computing (which some people describe with the much less lofty words augmented reality) as a potential revolution in how humans interact with the world. But he didn’t really win a lot of new friends this week by opening the show in a weird way, with no product announcements for more than an hour.

He had his top marketer Brenda Freeman and game developer Robin Hunicke of Funomena speak about the importance of diversity and female creators, before he really reminded everyone about what the product is: the Magic Leap One Creator Edition. Hunicke’s message was great, but everyone puzzled about why she went so early. 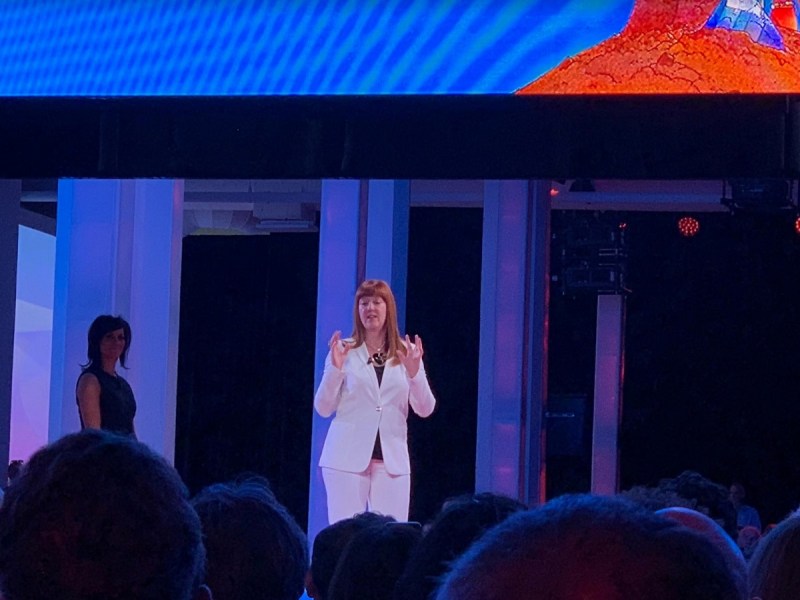 Above: Robin Hunicke of Funomena talks at the Magic Leap event.

The keynote droned on for three hours, killing the bladders of all of the spatial computing faithful in the audience.

Rio Caraeff, chief content officer, said in an interview with me that independent game developers are extremely important to Magic Leap, as are all of the creators out there. But Tipatat Chennavasin, general partner at The Venture Reality Fund, reminded me that Facebook invested more than $250 million in Oculus virtual reality apps and promised it would invest another $250 million. He was disappointed Magic Leap made no such move, given the amount of money it has raised. Nor did it give a real indication of when the $2,295 product would become a real consumer product, rather than an expensive toy for the rich.

We can cut Abovitz some slack for his passion, as he, like Facebook’s Mark Zuckerberg, wants to reach more than a billion people. Abovitz was able to convince Neal Stephenson, author of the legendary sci-fi novel Snowcrash, to join Magic Leap and come out on stage. Sadly, Stephenson didn’t wax as poetically as he might have, as he spent a large part of his time talking about virtual goats.

I think about what could have been in this keynote, which seemed a little unrehearsed. Mike Zyda, a professor at the University of Southern California’s Viterbi School of Engineering, said he watched it as well and thought Abovitz should have studied a Steve Jobs keynote. That would have allowed him to cut the parts that seemed important but really just ballooned the keynote to the point where the only thing that people remembered was that it was too long.

If we learned anything from the false start of VR in 2016, it is that launching a new computing platform is a gigantic task. Many of Magic Leap’s demos were dazzling and the stuff of science fiction. But so were the early demos of the Oculus Rift and the HTC Vive. VR demos like Ocean Rift and Bullet Time were great for showing off VR to friends and relatives. A lot of us did that. But then the VR headsets went into the closets and didn’t come out for months. I can see Angry Birds for Magic Leap being the same thing: You can show it off, but you may not play it for more than an hour or so. 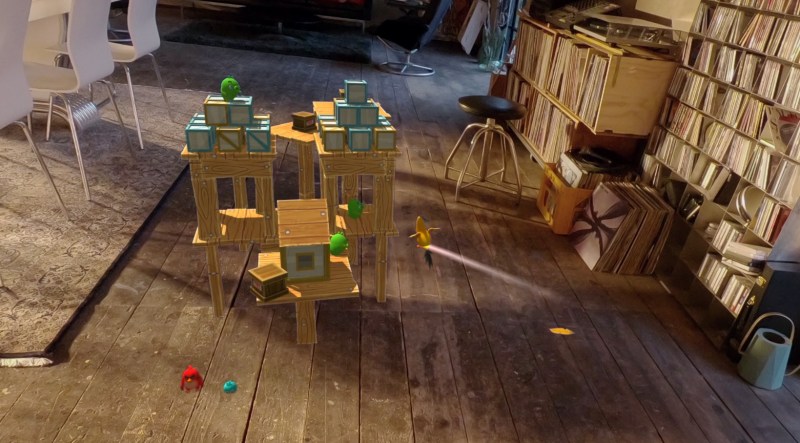 Above: Angry Birds on Magic Leap.

The mistake of VR was that it did not have a killer application, like email or Twitter or Pokemon Go, that forces you to go back to it every single day.

AR has the same problem as VR. A single person can see the demo in its full glory, but it doesn’t look nearly as inspiring to someone looking at it on a big screen. So Magic Leap’s job is to get as many headsets in front of as many people as it can. In fact, rather than try to sell units for $2,295, I think the company ought to just go all-in on the location-based entertainment, as many VR companies have learned to do, where a 10 minute experience may cost $10.

That kind of effort is going to be expensive. But I should remind you that Microsoft lost around $5 billion to $7 billion in the first four years of the Xbox business. That period of “investment” had to happen before the business started humming with the 2005. If you’re a Magic Leap investor, you’re going to start scratching your head. Wait a minute. This first one is going to sell poorly, the second and third ones too, and maybe the fourth model will take off?

Fortunately, about half way through the event, Abovitz showed some magic. I had seen these demos the day before, but most people were seeing them for the first time during the keynote.

Weta Workshop showed off Dr. Grordbort’s Invaders, a zany robot-shooting game that had been in the making at Peter Jackson’s New Zealand special effects house for 5.5 years. It was a work of astonishing care and patience.

And my favorite was a demo of Mica, a humanlike artificial intelligence that can be viewed in the Magic Leap One. Mica is a short-haired woman who doesn’t speak but still communicates in warm ways with the viewer. I put the AR glasses on my head and looked through prescription inserts to see the virtual overlays on the real world. Mica’s eyes followed my own. It was enthralling and uncomfortable.

Mica is just the tip of what could be an amazing shift in computing. Andrew Rabinovich, head of AI at Magic Leap, and John Monos, head of human-centered AI, talked about how they see digital humans and AI-based virtual avatars becoming real in the coming years on the Magic Leap platform. 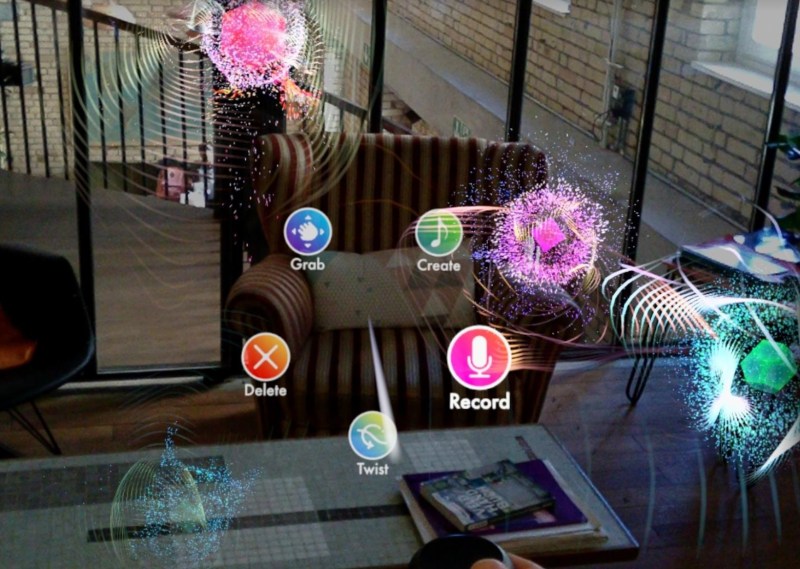 These avatars will be like fully embodied Amazon Alexa smart speakers. When you wonder what the song was that you liked so much at the Pink Floyd concert last year, the virtual human, dubbed Aya in Magic Leap’s stage talk, will answer that it was “Another Brick in the Wall.” Aya will get to know you and your emotions. If your friend Erika comes over, Aya will detect that you are happy when you talk with Erika, and it will store that in her AI memory, Rabinovich said.

This is spatial computing. Your computer will not only understand you. It will understand your surroundings and who is sitting next to you, and it may ask you if both of you want to hear the song that you both love so much.

Magic Leap didn’t talk about that last part, but I’m running with the idea of the imaginary friend that could take the form of Mica or maybe just a dragon on your shoulder.

Such spatial computers, like the cordless Oculus Quest coming next spring, will give us the freedom to move about a room and still stay fully engaged with a computing platform. With these platforms, you’ll be able to swing a lightsaber in a 360-degree circle or toss a snack to a little Porg creature, without getting tangled up in a cord.

“The messages we wanted to get out today are very much about — we support independent creators. We have a range of developers across a number of industries who are working on the platform. We have a long road map in terms of the vision of a Magicverse and how that ties in with what Neal Stephenson and John Gaeta were talking about, how it ties in with AT&T,” said Caraeff.

These little things, which were a lot of separate threads, inspired me to believe that Magic Leap is doing something special. I only wish they did a better job of tying the threads together so that we could all believe that.