The bulk of AR/VR startups aren’t selling outside their own backyards, at a time when growing revenue and extending financial runways have become critical to survival. So while there is money to be had internationally, many are simply leaving it on the table. While Chinese computer vision/AR investment grew 3x to $3.9 billion over the last 12 months, in stark contrast North American VC investment in AR/VR startups dropped below $120 million in Q3 2018. So North American startups (63 percent of revenue generated domestically) not making money in Asia (only 11 percent of revenue coming from the largest revenue region) or Europe (just 16 percent of revenue from the second largest revenue region) could be putting themselves at risk.

Digi-Capital and Augmented World Expo (AWE) surveyed the global XR (AR/VR) community in September with selected highlights below. The full results are in Digi-Capital’s new 300 page Augmented/Virtual Reality Report Q4 2018, with all market data/analytics in Digi-Capital’s 500,000+ data point AR/VR/XR Analytics Platform. Digi-Capital Managing Director Tim Merel will present the results and more at AWE Europe on October 18th. (To participate in the next survey, email info [at] digi-capital.com)

Look to the East 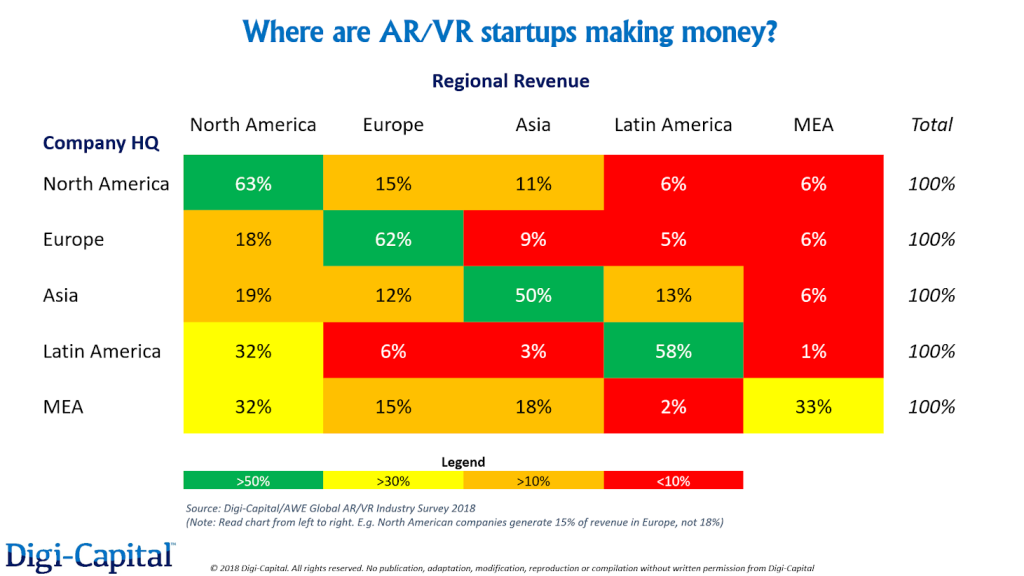 Above: Where are AR/VR startups making money?

Asian companies’ revenues outside home markets favor the highly competitive North American (19 percent) market over Europe (12 percent). While Europe holds significant potential for Asian companies, managing European fragmentation requires experienced local partners. This in itself could be an opportunity for pan-European players to help Asian counterparts, building both sets of businesses in partnership.

Outside domestic markets, Latin American companies are focused on North America (32 percent) due to geographical proximity and scale. But for companies in this region with international potential, Asia (3 percent) and Europe (6 percent) are significantly under-indexed.

Companies based in the Middle East and Africa appear to be truly international, with their own region MEA (33 percent) indexing similarly to North America (32 percent). Asia (18 percent) and Europe (15 percent) also make up a significant portion of revenue. This could reflect the relatively smaller potential of the domestic MEA market, requiring companies to focus their growth efforts abroad.

The view from the top

The early stage of the industry was highlighted by many of the rest of the findings, as well as a strong enterprise/B2B focus. Looking forward to the next year, participants gave clear priorities for growth and roadmaps to build their businesses and scale the industry as a whole.

The survey saw more than half of respondents from startups (53 percent), as well as corporates (15 percent) and service providers (15 percent). One third (32 percent) of respondents were CEOs, who together with CXOs/Corporate VPs (42 percent in total) makes the survey primarily the view from the top of the industry.

It’s all about that base

In terms of end users, at this stage more industry companies are focused on enterprise (60 percent) than consumer (44 percent) or B2B (44 percent) customers (who incorporate what they’re buying into their own products/services to sell to others). Participants said that enterprise customers’ number one reason for buying is to improve productivity (70 percent), as opposed to B2B customers where this purchasing driver indexed lowest (44 percent). For B2B customers, competitive advantage (76 percent) indexed much higher.

This difference suggests that enterprise customers might care more about efficiency (and potentially be more price-sensitive), where B2B customers could be more focused on effectiveness (and potentially be less price sensitive). Unsurprisingly, consumer focused companies say their customers buy mainly to have fun (54 percent), learn (47 percent) and explore (44 percent).

When it comes to business models, enterprise/B2B (61 percent) is the standout. However, combining all the individual consumer focused business models gives a larger overall response with significant overlap. When comparing current business model concentration with Digi-Capital’s actual and forecast revenue, “Blue Ocean” opportunities appear in ecommerce (15 percent) and advertising (22 percent), by virtue of being less crowded today with high revenue growth potential in coming years.

In the consumer market, there is significant concentration for app store (in-app purchase/premium apps) driven companies around entertainment, in particular games (56 percent) and non-games entertainment (56 percent). The next largest category by far is education (49 percent). Breakout apps in non-entertainment categories (such as navigation with Google Lens) could change the industry’s focus in future.

The early stage of the industry is reflected in the distribution of annual revenue per company for startups producing less than $1 million (56 percent) and $1 million to $5 million (15 percent), with startups between $5 million and $100 million indexing much lower. Corporates and later-stage startups delivering over $100 million revenue make up the remaining 14 percent of companies in the survey.

The only way is up

Participating companies gave a clear priority order of what they think the industry needs to do to scale, including critical use cases (53 percent) and active users (50 percent), as well as lower priorities for critical hardware, critical apps and more. The market recognizes that it’s all about the user, but also realizes that the ecosystem must come together as an integrated whole to scale.

Participants were clear about what their own companies need to do to achieve scale, including new products/services (35 percent), bigger customer/client budgets (32 percent), more effective go-to-market (29 percent) and more effective industry partners (27 percent). Better ROI from their own products/services (18 percent) indexed surprisingly low, as productivity is a key driver for enterprise customers.

When asked about their roadmaps for the next 12 months, the No. 1 priority is strategic partnerships (58 percent). This indicates that early stage companies realize that both recognized brands and route to market could be critical for success in the next stage of market development.

The early stage of the market came out strongly, with the industry refreshingly realistic about today’s market and what it needs to do to scale. While startups remain focused on addressing their own pieces of the puzzle, there is a general consensus that platforms like Apple, Google, Facebook, Alibaba and others need to become more effective leaders for the market to realize its full potential.

Isabelle Hierholtz, User Strategy Director, Digi-Capital. Isabelle guides companies from the user’s perspective, and has worked across AR/VR, consumer tech, entertainment, CPG and health/pharma. Isabelle was CEO of UserTruth Labs before its acquisition by Digi-Capital.