When I can get more kills than deaths in a Call of Duty match, it’s a glorious day. As a relatively elderly player of Call of Duty, I can honestly and proudly say that I’m a middle-of-the-pack player. Other people will post glorious videos of their great kills and kill streaks on YouTube. But with me, you can witness a completely average guy playing Call of Duty: Black Ops 4 multiplayer, which debuted last Friday on the consoles and PC. The game is selling quite well.

I like to think that I’m making the internet safe for average gameplay videos. My latest video, along with plenty of other pre-launch videos, is there for you to see on our VentureBeat YouTube channel. In this video of a multiplayer Team Deathmatch battle on the Gridlock map, I managed to get 19 kills and 14 deaths, for a kill/death ratio of 1.36. My team still lost, but I placed second on it, rather than fifth or sixth as I usually do.

I played on the PlayStation 4, and reveled in my fast Comcast internet connection. I can no longer blame my lack of skill on poor connection speed, as Black Ops 4 has only occasionally stalled me in 18 levels of play.

In this match, I found the camping points and figured out how to stay out of the sight of their snipers. Still, it was a tough battle. I can’t say it was particularly skillful, and I’m sure many people will make fun of me for being so proud of this average gameplay and bring up the whole Cuphead thing again. But it was the best I could do, and I think that millions of players can relate to this, and I would note that I am better at this game than millions of players.

Above: Dean Takahashi’s best match so far on Call of Duty: Black Ops 4.

So far, I have 18 wins and 23 losses. I have killed 375 enemies, 8 percent of them with headshots. I have suffered 590 deaths, for a lifetime kill/death ratio of 0.64. Of course, these stats are kindly compared to past years, as Treyarch is now using a more flattering way of counting kills. With this game, you pick a Specialist character, and my favorite so far is Battery (above), who has a cluster grenade and a special ability that is an old favorite: the grenade launcher. For a brief time in each game, I can fire the grenade launcher, or Noob Tube (named after the weapon of choice in past games for new players, or Noobies).

I’ve also enjoyed playing with Ruin, who has a very cool grappling hook that can sling you right into an upper floor window, and Prophet, who has a Seeker mine that finds the nearest enemy and gives them a disabling electric shock. Prophet also has a nice electric shock sniper rifle. Each Specialist can play a key role in turning the game in one side’s favor, depending on how well the player uses the special abilities, which only last for a short time, and how well you know each map. Some modes I do terribly, like Heist, where you start out with just a pistol. But to each his or her own. (The video below is a game I played at an Activision pre-launch event.)

You may ask how I’ve pulled off this wondrous record. I have focused on leveling up two different guns, my submachine gun and my Titan light machine gun. At level 18, I’ve leveled the Titan weapon itself up to 10, with attachments including the stock, holographic sight 2, full metal jacket bullets, and an extended magazine 2. I’m waiting to get full metal jacket 2 bullets, which could go a long way toward getting me more quick kills. A lot of the time, right now, I can hit an enemy a few times and still not bring him or her down, giving the enemy time to take me out.

But the Gridlock map has a couple of long sight lines where I can camp and hide behind cover while the other guys do all the running. Since I don’t have the greatest reflexes, this gives me the best chance of survival, and it’s not so different from how old guys survive in World of Tanks by hiding behind buildings. I’m lousy with a sniper rifle, particularly at close range, and so the LMG is my best solution. In narrow corridor battles, I use the submachine gun, though I should probably start leveling up my assault rifle soon before I get too reliant on the LMG. With an assault rifle, I might stand a better chance of quick draw duels with another player.

I like the game so far, and I think I notice a real difference in how the bullets go exactly where you are aiming. They don’t spread out as much in a crazy distribution, especially at close range, so if you can draw a bead on an enemy, you can get a kill. I’ve put in a full day of Blackout and a full day of multiplayer so far, and I like both of them. By far, Blackout is the most social version of Call of Duty to date, as you have to talk on the microphone to help each other win in battle royale teams. 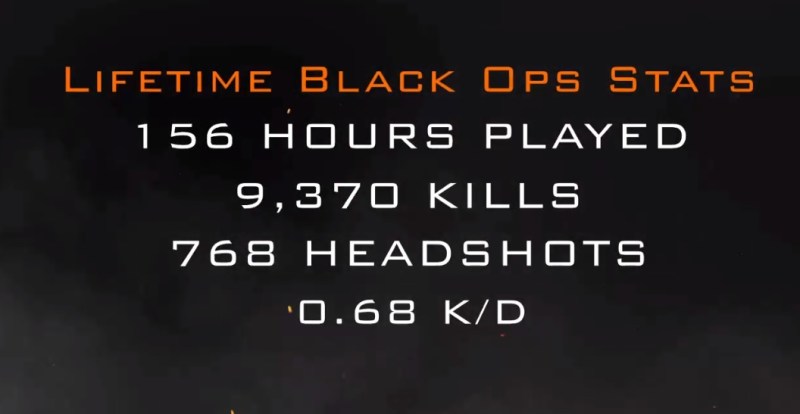 Above: Dean Takahashi’s Call of Duty: Black Ops I, II, and III stats.

And by the way, here’s my lifetime stats in the previous Black Ops games so far in the image above. The nice thing about Call of Duty is that your stats don’t lie. You can see how much time you’ve put into it over the long haul.

Hopefully I can improve my score. Last year, with  Call of Duty: WWII, I managed to hit the highest level of 55 (Prestige) in the game after 54 days of gameplay. At that time, 2,525,998 players were ranked ahead of me. I had a 1.24 win/loss ratio and a 0.78 kill/death ratio. I find that once I hit the optimal weapon levels after 25 or 30 levels of play, my kill/death ratio starts to go up as I can prey on all the Noobs out there.

Hopefully, I can hit Prestige in the same amount of time this year, so long as Red Dead Redemption 2 and Battlefield V don’t get in the way.